Discourses of Religious Freedom in Ads against Same-Sex Marriage 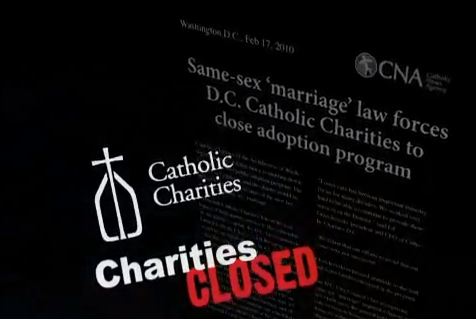 These ads draw from a documentary series called Speechless: Silencing the Christians, created by the Reverend Donald Wildmon, founder and president of the American Family Association, a national organization that has worked for decades to restrict same-sex marriage and other rights for LGBT individuals. The 13-episode series was produced in 2008 and published as a book in 2009:

This discourse of religious freedom relies on civil rights language rather than morality. It focuses on the ability of individuals to live lives of faith in the world and make decisions in all aspects of their lives in accordance with their religious beliefs.

This understanding of religious freedom has more in common with arguments about civil rights than ones about religious morality. Rather than arguing about a particular moral perspective (e.g., the immorality of homosexuality), religious freedom rests on an argument that all individuals should have the freedom to make decisions based on their religion and should not be obstructed in their daily lives in doing so. The ads present Christians as embattled victims of intolerance for their religious views.

The political ads also use many of the zero-sum arguments about civil rights that have been documented by scholars since the 1960s, with gains for one group seen as a loss for another group. For example,  a gain for African Americans through desegregation was constructed by some white citizens as an equally dramatic loss for themselves.

Thus, these political ads, which seem to emerge out of the individual politics of each ballot measure, are connected to a larger argument about same-sex marriage and a long history of arguments about civil rights.

Amy L. Stone is an associate professor of sociology at Trinity University in San Antonio, Texas.

It's interesting to notice how discourses of "gay marriage would infringe upon religious freedoms" are based on the assumption that some religions (with very explicit reference to the majority of Christian and, more seldom, Jewish denominations) who oppose gay marriage are more deserving of religious freedom than others, who are pro gay marriage (for instance: unitarian universalists; some liberal Christian denominations such as Liberal Quakers, the Episcopalian Church in Scotland or some Methodist churches; some Reform Judaism congregations; a great deal of the Animistic, Neo-pagan or New Age religious communities).

For example, until recently, a law in the UK forbade same=-sex civil unions to be officiated in churches; this being pushed by members of religions who oppose gay marriage as they feared legal precedent or European legislation might end-up forcing them to blelss gay marriage against their religious thought/conscience.How about the religious freedom of churches/congregations/groups who support gay marriage and believe the interdiction to be against their values??

I'd also be curious of how one would react to "gay marriage infringes upon my rights" discourse coming from a Muslim rather than Christian group... Just sayin'.

It is so hard to wrap your mind around these people. They're saying that any suggestion that they'd hact out of hate is a stereotype or a lie, only to turn around a minute or so later and lament that homophobia isn't socially acceptable anymore and that people don't hate gay people. They seem to be at least ok with stopping bullying and harrassment, but in the same minute they express outrage at the idea of treating gay people with respect.

It is so obvious that they're unable to see gay people as people or anything worthy the slightest bit of regard, and that seems to be what makes this hideous double standard possible to maintain. They somehow manage to express so much hostility towards other people and at the same time think of themselves as good - it's horrifying

Anyone want to form a new religion which abhors opposite-sex marriage? We could protest said marriages in a high-profile way (of course, without interfering or disrupting the ceremony) and make all the same absurd claims about marriage that the current nuts are.

We could demand equal time on news coverage, then point at the fact that we aren't being covered (or aren't being taken seriously if we are covered) as part of a "[right|left] wing conspiracy to sinful behavior".

The problem would be in compensating for Poe's law: it is impossible to be so sarcastic that nobody thinks you are sincere.

It's a logical progression.  First, supporters of gay marriage changed the framing of their advocacy from one in which gay marriage was portrayed as a morally justified exception and special inclusion to traditional marriage.  This framing didn't gain the necessary traction.  When it was changed to a civil rights argument under marriage equality the seas parted and acceptance was greatly accelerated.  Advocates of traditional marriage saw this, learned and now are responding in kind.  Its very interesting that the strategic framing can make all the difference by radically changing the nature of the implied questions that must be answered before a decision can be made regarding which advocacy position one supports.

I am cypran mark i need a gay relationship     cypranmark@gmail.com

The religious freedom argument against gay marriage doesn't hold up. Nobody is forcing any religious zealot to enter into a gay marriage against their will.

Having said that, I think it is going too far to suspend or fire people for voicing their bigoted views.

Ri-freaking-diculous.  I'm a conservative Christian, and I believe it's a sin, but I will vote FOR gay marriage every time, because it's none of my business.  The best way for me to protect my religious freedom is to protect your religious freedom.  If you're gay and want to take birth control, go right ahead, it doesn't in any way harm me.  Argh.