Durkheim at the Parade 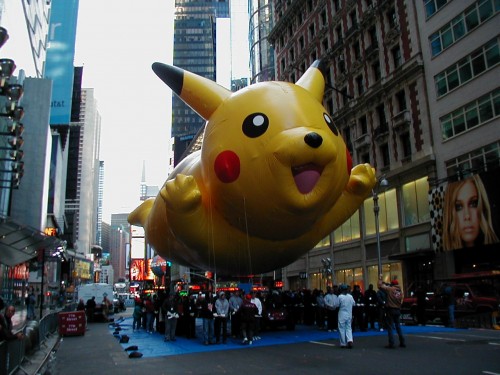 Emile Durkheim, founding father of sociology and author of The Elementary Forms of Religious Life, would love  the Macy’s Thanksgiving Day Parade. Consider this excerpt from a British observer, Jonathan Raban, who watched the parade twenty years ago from a window on Central Park West. The parade, he said, was…

…the secular, American descendant of the European Catholic Easter procession in which all the icons and saints’ bones are removed from the churches and carried ceremonially around the town. The baseball hero, the gaseous, rubbery Mickey Mouse, the Mayflower pilgrims were the totems and treasure relics of a culture, as the New Orleans jazz and Sousa marches were its solemn music.

Had a serious-minded Martian been standing at the window, he would have learned a good deal by studying the parade’s idyllic version of American history. [guns, refugees, rebels]… The imaginative life of children was honored to a degree unknown on Mars — which was, perhaps, why matters of fact and matters of fiction were so confusingly jumbled up here, with Santa Claus and George Washington and Superman and Abraham Lincoln all stirred into the same pot.

He would be struck by the extraordinarily mythopoeic character of life in this strange country. People made myths and lived by them with an ease and fertility that would have been the envy of any tribe of Pacific islanders. Sometimes there were big myths that took possession of the whole society, sometimes little ones, casually manufactured, then trusted absolutely.

In my class, when we read about religion, Durkheim mostly, I have students write a paper about a secular ritual. One goal of the assignment is to get them to see that, from a functional perspective, a ritual is a way to generate and distribute the energy for binding the members of a society together.  It doesn’t really matter whether the ritual is officially secular or religious. In fact, if you’re a complete stranger to the culture, you probably couldn’t tell the difference. 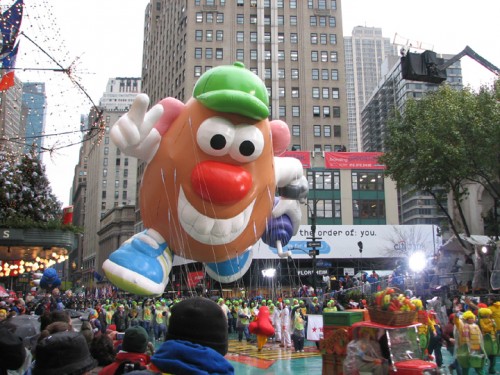 No student has ever chosen the Macy’s parade. I wonder why not. Raban, who is from England, not Mars, senses the religious aura of the parade with its many gods. Had there been a Macy’s in ancient Greece, the parade would no doubt have had balloon representations of Demeter (god of the harvest), Poseidon (god of the sea), Aphrodite (god of beauty), Hermes (god of silk scarves), and of course in the U.S., Hebe (goddess of youth). And all the rest. We’re not Athenians. Instead, we throng the streets for icons like Snoopy and Spiderman, Pikachu, Bullwinkle, and Spongebob, but the idea is the same. They are our totems, our gods.

I imagine Durkheim on Central Park West, watching the children and grown-ups that have come together here to look up to these huge embodiments of our cultural ideals. Durkheim feels a frisson, a shiver of recognition. What better way to symbolize the idea about the binding power of ritual social energy?

I consider William G. Sumner the Father of American Sociology.

This is a beautiful article--well-written, with a light amount of distance with which to view our own culture. Thanks for sharing. :)

Astounding projection.  Certainly the parade can be viewed from a functionalist perspective, and that perhaps Durkheim might come to the same conclusion, but how can anyone possibly say whether he would or would not "love" something.  Science is not about likeing, loving, etc., it is about the explanation of phenomena in an attempt at limiting bias.  Furthermore, it wouldn't matter if he "loved" the phenomena even if there was some way to prove that.  The phenomena either fits the theory or it doesn't...there is no emotion about it that changes that process, if done correctly.   Jay, if I had the power, I would vote no confidence in your sociological insight.  Your contribution is with little to no merit.

"... And this float arrangement, class, symbolized a sacred ritual of Spider-Man's submission to Uncle Sam."

I think that there is only one god being honored in the Macy's Thanksgiving Day Parade, particularly now.  That is the American Marketplace, just about every float, balloon, and act is something up for sale.  It's a kick off for the holiday season of shopping and spending on a grand scale.  For me it's the parade of "Things My Niece and Nephew are Gonna Want".  What more could we expect from a retail funded parade?

Indeed, an arrogant article. The author is also embarrassingly ignorant of ancient Greece:
'We’re not Athenians. Instead, we throng the streets for icons like
Snoopy and Spiderman, Pikachu, Bullwinkle, and Spongebob, but the idea
is the same. They are our totems, our gods.'
The above objects are not 'our gods'; we do not pray and make sacrifices to Spongbob, etc. I, for one, find the commercialism of Jew York sickening.

Spongebob is god;I live and learn...

Happy Thanksgiving to all!

Thanks for sharing your pictures. Waiting for your next post. Last one was more than 2 years ago..
Dei Santos | Digital Reviewer | freesitemaker.net