The Gender Politics of the Dollhouse

This holiday season, a dollhouse may be a feminist gift for a little girl.

A tweet from Natalie Novik inspired me to look into the toy.  She had discovered a gender-neutral dollhouse being sold at Etsy.  Following up on her lead, I went over the Toys R Us website to see what gender messages dollhouses were sending.  Some of the results surprised me.

Among the 22 best selling dollhouses at Toys R Us, four came without people, six came with a preponderance of females, ten came with a male, female, and children, and there were two I couldn’t categorize.  (All humans were white — some dollhouses included non-human creatures — and just about everyone appears to be wealthy.)

The majority of dollhouses, then, came in two types.  The first was an explicitly family-themed toy.  The message of these was heteronormative, for sure, and also pro-coupling and pro-reproduction.   The Fisher-Price Loving Family Home for the Holidays Dollhouse is an example: 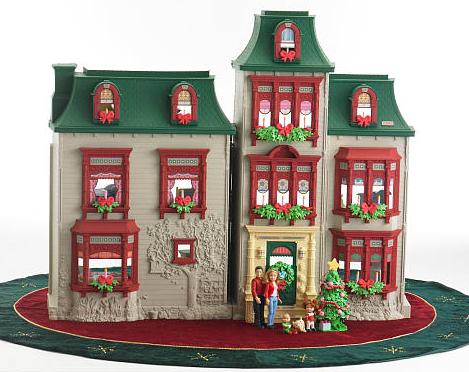 The second type of house, however, had themes of friendship and, dare I say, female-independence.  These houses had only women or, more often, a group of women and one man.  They gave the impression of female home-ownership and female-dominated social interaction.  The Exclusive Barbie Malibu Dreamhouse is an example: 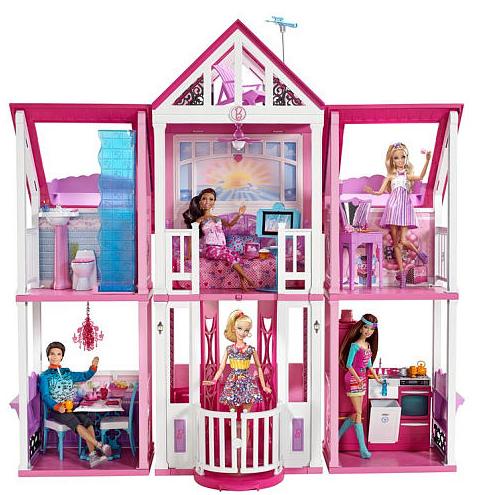 Interestingly, most of the dollhouses that fell into this second type were Barbie affiliated.  People disagree as to whether Barbie is a good role model for young women.  She is roundly criticized for upholding a harmful standard of beauty, but she also tells women they can run for President and go to the moon.  In this case, Barbie is sending girls the message that they can have fulfilling lives and own homes without a husband.

As if to capture the paradox completely, the dollhouse featured above comes complete with a Barbie in a bikini doing astronomy: 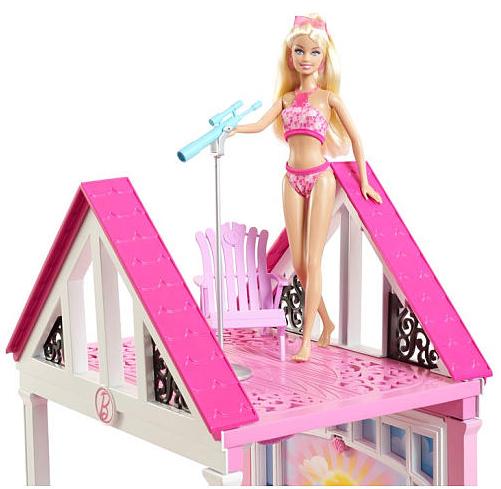 Children, of course, play with toys both creatively and in resistance to the messages they send.  We’d be happy to hear your stories and observations in the comments.

Just out of curiosity, what were the two you couldn't categorize?

The image of the astronomer barbie in a bikini... it just captures everything that is so completely confused about women's role in modern society.

Love this. Reminded me of playing Barbies with my childhood friend--the dolls we imagined as stand-ins for ourselves sometimes had boyfriends or husbands, but the main theme of our play was the dolls' friendship with each other and the business they ran together when not driving cross-country in their RV. (Which was beige. Not pink.)

I do think that the youthful imagination can make the most of what is to hand. Still, though, visibility matters; imagination is built from the visible world as well as the world of wishes, so criticisms of Barbie's impossible femininity still stand even though I am grateful for the emphasis on female relationships and independence.

This is more or less why I think that Honda She's car isn't so bad either.  There is actually something sort of revolutionary about the idea that cars and houses can exist solely for the enjoyment of women, because the idea is that the women are buying and owning these things without the assistance of a man's finances.

I'm a bit torn on this. On one hand, you do have a point that these houses might be empowering if kids know how to play with them and as  part of world creation for their toys. On the other hand, there's no escaping that the dollhouse is coded feminine and that the domestic sphere is assigned to women. Conditioning play to be set in the home is also condititioning kids to keep within that sphere.

As a side note, I couldn't look at the house at the top without thinking of the class angle. That's not a family home, that's a mansion. At least the barbie house is up front about being an exclusive dreamhouse, but even that tells its audience that an exclusive Malibu house is something to desire.

I wonder, was it possible to get dollhouses with nonwhite families at all (BTW, having looked through all of the dollhouses, I can say definitively that regardless of the other dollhouses, there is at least one with a black family and one with an Asian character by default)?  I had a Fischer-Price dollhouse as a small child and recall having both a white and black family (mom, dad, baby) who apparently all lived in the same house.  The preschool I attended also had a similar dollhouse (though much older) with both a black and a white family.  Interestingly, when I was playing with the dollhouses (between ages 3 and 6, I'd say) I always found the families incredibly boring because the child of the family was always an infant, instead of a kid my age.  Also, since the babies were the exact same skin tone as both parents, I was frustrated because I found it unlikely that I could make a family like my own, but having the white male doll and the black female doll be married with a baby, because the dolls only came in "dark skinned black" and "white with blonde hair and blue eyes."

As for all the dolls being "wealthy," well, I think that's just the nature of a dollhouse, and our own assumptions about what "wealth" must mean.  A large dollhouse with many accessories would be much more fun to play with.  A tiny house or apartment with bare floors would be a terrible toy to buy a child if they wanted a dollhouse.  Plus, there is no rule that to own a house, even a relatively large one, you must be wealthy.  Barbie must be wealthy, because she owns a beach house in Malibu, but the real estate market isn't the same everywhere as it is in California, where you practically need to be a millionaire to buy a dilapidated shack.  Many of these houses have four to eight rooms, including kitchens and bathrooms.  Who says these people don't live in a state where they can get a nice suburban home for not too much money?  No one I grew up around was rich, but I lived in a house with multiple rooms, and it was one of the smallest houses on the block.  Who says they don't live in a rural area, where a large house may go for less than a small, falling-apart apartment in the city?  Hell, who says this family doesn't rent?  If Barbie didn't live in Malibu, with all those single, scantily clad, obviously educated 20-somethings in the house, I'd assume they were college students sharing rent on an inexpensive house to cut costs.

An issue with gender equality will always be that women can only move into the sphere(s) traditionally inhabited by men if men are equally as willing to move into the sphere(s) traditionally inhabited by women (or we, as a society, collectively create alternative organizations to fulfill those needs or modify existing ones). In part, this means that doll houses can't just be for girls. While your initial link to the gender-neutral doll house is a step in the right direction, the coding of doll houses being "for girls" in mainstream stores is problematic. I like the idea that a little girl can play with a doll house that has a focus on independence, friendship, or diverse family forms, but I also want to see a discussion about the acceptability of allowing little boys to have doll houses, as well.

"As if to capture the paradox completely, the dollhouse featured above
comes complete with a Barbie in a bikini doing astronomy."

I thought the telescope was a sniper rifle.

Ken has a harem.

It's interesting that somebody brings up class and the fact that the first one looks like a mansion. The first dollhouses were strictly an upper class affair, and moreover, they were for adults (such as this one :  https://www.rijksmuseum.nl/en/collection/BK-NM-1010)

More than the images presented here, I'm fascinated by the "gender neutral" dollhouses pictured in the link, which seem to say a whole lot more about CLASS than gender neutrality. Modernist design masquerading as feminism is new to me. Also surprised by the writer on that site referring to the addition of a library and tool shed as aspects that would make a dollhouse more appealing to (her) boy, as opposed to, say, elements that children of all genders might find appealing because they indicate that adults do things other than cooking and sleeping. Anyway, the dollhouses pictured seem less geared toward engaging children than toward giving rich people an opportunity to buy toys that match their mid-century modern furniture. Gross.

Plan Toys has wonderful doll houses (people not included) that are easily adapted by imaginative kids.  My son uses his as a house, a fort, a ship, a prison, a castle...

The doll sets are heteronormative and only come in one race/family but you could get a couple sets and mix things up a bit...

Barbie does NOT teach girls they can be astronauts, just that they can dress like astronauts. It's about fashion, not profession role-playing like GI-Joe or other action-figures are.

I don't see the fuss here. Obviously most of you have nothing better to do other make social comment.
I'm male, I'm not attracted to ugly women and the same can be said for almost any women but it is interesting that when choosing a partner, the female of the species will almost always pick the most likely top provider.

That Barbie on the roof isn't looking at the stars - the telescope is pointed in the wrong direction.  She's checking out the Barbie sunbathing on Malibu beach.

There are plenty of gender-neutral or boy-oriented dollhouses out there.  They just don't call them dollhouses.  I had Playmobil as a kid, including both a camper van and farm set that were very much dollhouses in form and function.

Lots of gender neutral dollhouses at

of course, that assumes both genders are equally interested at recreating warfare in miniature with accurate 1/72 miniatures.

It is also interesting to look at another side of the dollhouse. I have seen toy website which feature "Doll houses for boys". These are, on inspection, not houses at all - but instead are spaceships, submarines, pirate ships etc. Not actually doll houses in the traditional sense, but like doll houses include minature [male] people which inhabit these work spaces. Yes, there are parts you wouldn't see in a doll house such as cockpits and control rooms. But often there are general living spaces as well, kitchens, bedrooms, bathrooms etc. These toy sets probably aren't that new an idea, but I find it interesting that they are often marketed as doll houses 'for boys'. On the one hand reinforcing the idea that women and men are at home, but only men have the adventures. On the other hand, admitting that boys too like to role play with little dolls, making them work, but also go to sleep in little beds, eat [and presumably cook sometimes] in little kitchens. Here are some examples: http://boysgerms.com.au/2010/08/not-a-dolls-house-in-sight/
http://www.squidoo.com/dollhouses-for-boys

A lone man living in a house with four women: in traditional terms, this is a harem. If we're looking for non-heteronormative, non-coupling-focused housing, we should be seeing some rounder mix of men and women; the message in the Barbie house seems to be: it's okay for girls to go about their own business but there needs to be a man in the house somewhere.

[…] The Gender Politics Of The Dollhouse from The Society […]

My hamster had a better house!

If you want a dollhouse for children undivided by gender and can be enjoyed by both boys and girls then I highly recommend Calico Critters.