Congressional Races and the Manipulation of Districts

In a democracy, all votes are created equal — one person, one vote -– but apparently some votes are more equal than others.  Obama won the electoral college vote 62% – 38%, though his margin in the popular vote was much smaller: 51% – 48%.

A similar discrepancy happened in the vote for Congressional representatives.  The Republicans control the House of Representatives, where they have 54% of the seats. But if you add up all the votes for those seats, the Democrats come out slightly ahead (by about 500,000 votes).  More votes but fewer seats.

That discrepancy arises from the distribution of Democrats and Republicans in a state’s Congressional districts.  Take a hypothetical state with four districts, each with 200 people.  The popular vote splits evenly –- 400 Democrats, 400 Republicans. Here are the election results: 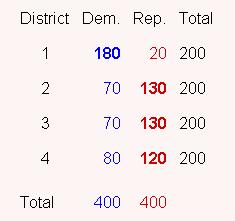 The Republicans have 50% of the popular vote but get 75% of the seats.
Less hypothetically, in North Carolina, Democratic candidates outpolled Republicans 2.22 million to 2.14 million.  But Republicans won 10 of the 14 seats.  The Democratic votes were crowded into four districts.  In three of those four districts, the Democrats won big – by an average of 133,000 votes.  (If the 7th district, where Democrats now have a slim lead, goes Republican, that average margin will be 177,000.)  Had some of the Democrats from one of those districts been mapped into the neighboring district, they might have won both, though by smaller margins.  The Republican districts had secure but smaller majorities.  Republican winning margins averaged 50,000 votes, less than half the margin where Democrats won.

My first thought was that this was pure Gerrymandering.  State legislatures get to draw the maps of their Congressional districts.  And many more state legislatures are controlled by Republicans.  In fact, some of the North Carolina districts have unusual shapes.  The NC-12, the thin blue line along Interstate 85 stretching nearly to the border, was created as a “majority-minority” district so that Black votes would not be diluted.  The downside for Democrats is that it packs those votes into that narrow corridor.  So the Democrats take that district by over 180,000 votes.  The Republicans with the neighboring districts but by much smaller margins – 23,000, 25,000, and 53,000.  In those four districts, the Democrats got 53% of the vote, but Republicans took three of the four seats.

The Democratic district snaking down through the middle of the state is the 4th, which contains “the Triangle” to the north, but now has that tail stretching down.  Democrats carried the district  by 170,000 votes.  Surrounding it is the 2nd (in pink), which Republicans carried by only 45,000 votes.

Similar differences crop up in Ohio and Pennsylvania. The popular vote is close, and in two of these states it goes to the Democrats.  But Republicans get most of the seats.  Republicans win their seats by less than half the margin of Democratic winners.  Here is a graph of the actual returns from Ohio, Pennsylvania, and North Carolina. (The Ohio total does not include the vote from the two uncontested districts, one Democrat, one Republican.  For the maps and election results, check out Politico.) 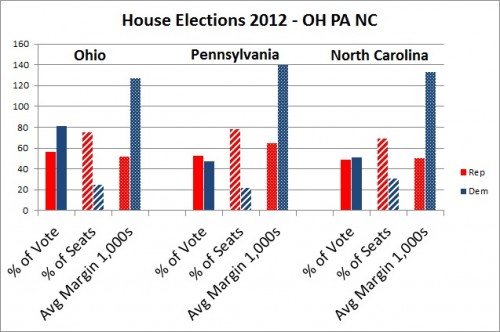 The Republican share of Congressional seats is far out of proportion to its share of the vote.  In Ohio and North Carolina, Democrats received more votes, but Republicans got 70-75% of the House seats.  It certainly is possible that Republican-dominated state legislatures drew the districts so as to cram Democratic voters into electoral ghettos. 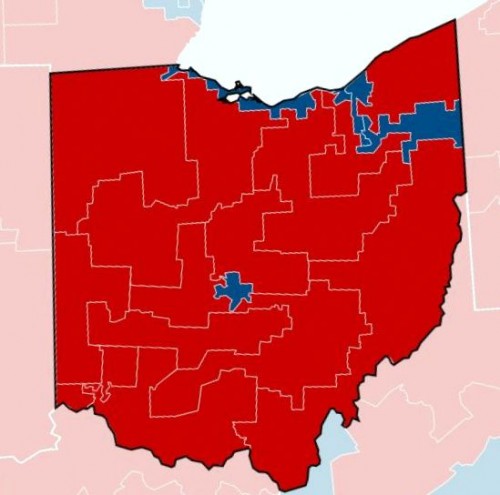 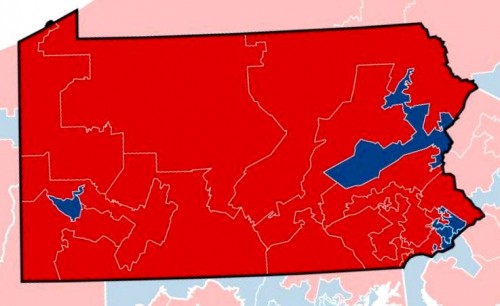 I don’t know enough about the demography and geography of these states, but I do wonder why the districts are drawn this way.  A paper by Chen and Rodd (here) that uses 2000 election data argues that what looks like gerrymandering is in fact the result of “human geography.”  It’s not the legislatures that pack Democrats together, it’s the Democrats themselves.  They cluster in cities.  As for Democrats outside of cities,

many rural, small-town, and suburban precincts that lean Democratic are often subsumed into moderately Republican districts. . . . There are isolated pockets of support for Democrats in African-American enclaves in the suburbs of big cities and in smaller towns with a history of railroad industrialization or universities. However, these Democratic pockets are generally surrounded by Republican majorities, thus wasting these Democratic votes. As a result, the Democrats are poorly situated to win districts outside of the urban core.

Regardless of intent, the effect is to keep Democratic votes concentrated in the 4th.  If that blue tail of the NC-04 were subsumed into the pink NC-02, both districts might be blue.

In any case, Democrats have not always been on the wrong side of the seat/vote discrepancy.  John Sides at The Monkey Cage posted this graph showing the ratio for the last twenty-six elections. 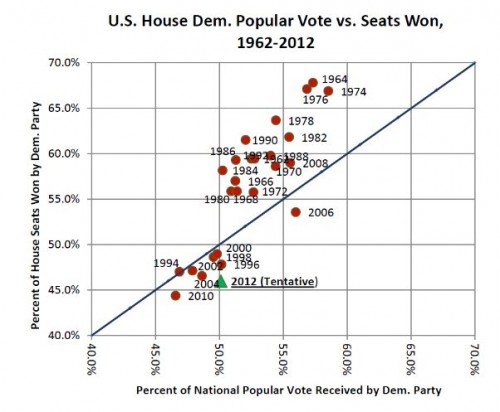 That trend might fit with the deliberate-gerrymander explanation, provided that in the earlier decades more state legislatures were controlled by Democrats.  But I’m not sure how it fits with Chen and Rodden’s human geography idea of “unintentional gerrymandering.”

Yes, several the democratic districts are majority-minority districts. Overall I've been pretty outraged by the Gerrymandering in our state.

This is a pretty fun little way to learn more about gerrymandering: http://www.redistrictinggame.org/

I live near the Dayton area in Ohio.  Since the big cities (Columbus, Akron, and Cleveland) are usually go to the Democrats, I was wondering why Dayton didn't too... but as I look at the map, it looks like Dayton is split up into 4 sections, with a lot of rural (and most Republican) voters. Divide and conquer? It makes me wonder.

Intuitively, congressional districts should be compact and contiguous, following existing political boundaries and natural geographical features. It's amazing how far away from that philosophy you can get if you are driven by pure partisan politics.

For ignorant like me this video does a nice job explaining gerrymandering and other problems with elective systems:

The Maryland district map is an excellent example of gerrymandering on the other side of the aisle; and, unlike with the districts here, it's completely implausible that the intent of the recent redistricting was to provide racial minorities with Congressional representation, since it extended the district that previously covered the rural, white, Republican counties in Western Maryland into parts of suburban, white, Democratic Montgomery County in order to get Roscoe Bartlett replaced with a Democrat.

In the second case they are a truer representative of the people, but in the first they have at least some incentive to consider pandering to bother sides.

oh yeah well what are you gonna do about it

Perfect districting would grant all of the seats to the party with a simple majority (assuming that the party candidates all follow the party line).

Anything less than that is evidence that gerrymandering is not taking place.

Epoxy is a mass and heat painful and sensitive material. The gel time (time it requires the combined epoxy resin and hardener to originally harden up) may vary drastically relying on... click https://floorhardener.jabodetabek.my.id/ for detail.

Institutional Executive-Education.id is often a Jabodetabek private tutoring support that may be well guided by simply encountered instructors to all topic areas of expertise lessons in any respect quantities ... go to https://kursus-ekonomi.netlify.app/les-privat-ekonomi-jakarta-barat.html for more details

Are you wanting tutoring services or private lessons while in the Greater Jakarta area as well as its surroundings? Searching for private tutoring services... visit https://kursus-mandarin.vercel.app/kursus-bahasa-mandarin-tanah-abang.html for more information

Executive-Education.id is a private teacher provider site in Jabodetabek that is able to help parents to seek out tutors for their kids according to their wishes... go to https://privat-matematika.vercel.app/les-privat-matematika-jakarta-selatan.html for more details