Who Would Have Won If…

Buzzfeed has put together a great collection of U.S. maps showing what last Tuesday’s election would have looked like if women, non-whites, and 18- to 23-year-olds had never been given the vote. 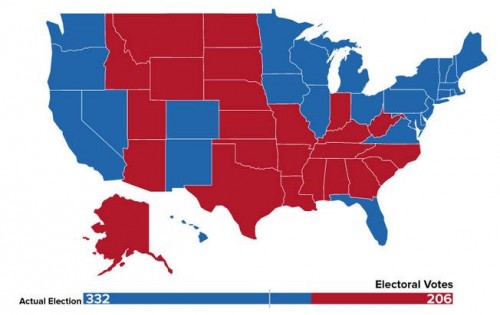 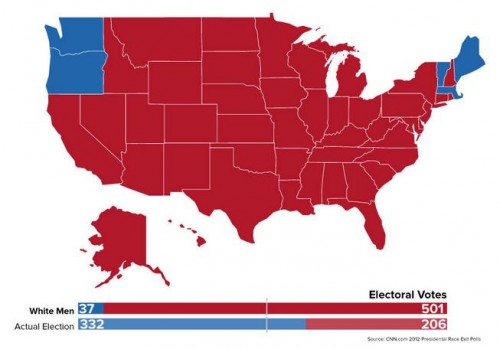 Results with only men, all races: 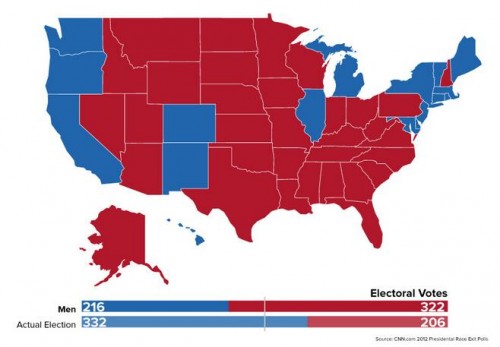 Results with only white people, men and women: 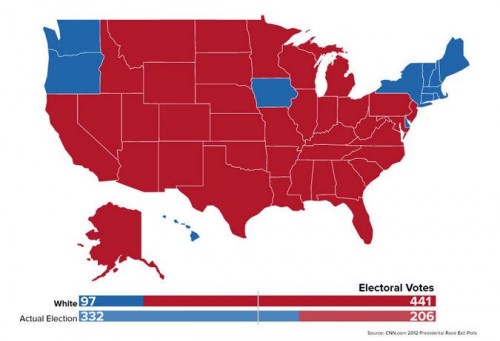 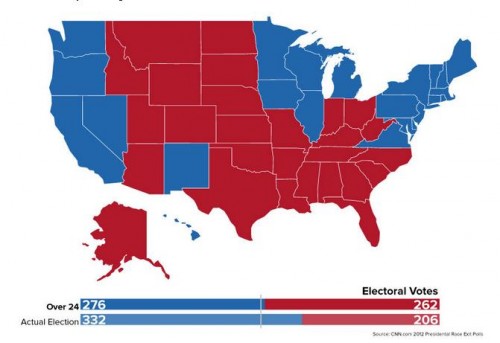 The results are stunning and are a hint of just how consequential the ongoing voter suppression and disenfranchisement can be.

Disenfranchisement or common sense? How many 18-23 year olds really have the knowledge and maturity to make a decision regarding their own future, let alone the future of their country?

Really great maps of a more representational view of the election:

What " ongoing voter suppression and disenfranchisement" are you referring to?

Kill everyone over 70. Old people are generally useless and would be better off "recycled". If they can pay up it is of course a different story.

So I guess we should get to work figuring out why white men in those 5(?) states are dissimilar from those in the rest of the states?

I've seen this on Buzzfeed, and the white male map is legit scary yo. I'm tellin ya.

I also saw these charts on Buzzfeed.  And I know that this is not what Lisa or the Buzzfeed staff are implying; it's obvious you guys are making a statement about discrimination and voter enfranchisement.  The following is a comment on comments I've seen around the internet, including here and at Buzzfeed, but also everywhere else, for the last 2 elections, that goes,

"Well, if not for the black/gay/youth vote, X candidate would have won instead."

in reference to the fact that those groups, plus women (I rarely hear moaning about women's votes though), skew left, usually heavily.  And that disturbs me.  It does not disturb me that white men are vested in their own interests and if in power are willing to suppress others to maintain their interests.  That's a side-effect of power; I don't doubt that if a different group was in power, they'd do the same.  What disturbs me is, that in this supposedly equal society, that is said, because what it means is,

"The black/gay/youth vote doesn't even count, since if we only counted the white/straight/40 years and older vote, X candidate won instead, and that means technically they did win."

Which, of course, carries the implication that only the votes of white straight people over 40 "really" count or "should" count, because they're the only REAL Americans.

(I also hear a lot of "well, if we didn't count California, New York, Oregon, Washington, Illinois, and the rest of New England the X Republican candidate would have won," which also has a "REAL American" tint to it, but that answer is different)

I'm not sure it's possible to discuss these hypotheticals without acknowledging that in the first and third contrafactual maps, Obama would not have been running in the first place....

The only thing I find slightly surprising here is the fact that, despite the vast amounts of campaign money and saturation advertising sunk into both states, Obama could have won this election with neither Florida nor Ohio.

Give apes the vote, you won't regret it!

Cool. But how do you get these figures? I thought voting is anonymous. I've never needed to put my info on a ballot. This gives white guys a bad wrap...ohhhhh

So what would the map look like if only women voted?

Type your comment here.RED OR BLUE IT'S ALL ILLUMINATI - WAKE UP - ILLUMINATI CONTROLS US -
ILLUMINATI CONTROLS WORLD - CIA DID 911 - SADDAM IS ALIVE - OSAMA IS
ALIVE - HIV OR AIDS - CANCER CHEMTRAILS - DON'T BELIEVE WHAT YOU SEE IN
THE NEWS - WAKE UP - 11:11 - 1:23 - BACKWARDS ANGELS - BACKWARDS TIME -
WAKE UP - DEMOCRATS - REPUBLICANS - WOLF IN SHEEP'S CLOTHING - OCCUPY
WALL STREET - OCCUPY ILLUMINATI - CIA IN YOUR BRAIN - CIA WATCHING YOU -
ASPARTAME - CONTROL THE MASSES - RADIO TRANSMITTERS - 1984

cut the head off the voters... and the body will follow...

What is the optimum age range for MILITARY BRAINWASHING?

What would it be if just women where allowed to vote?

"The results are stunning and are a hint of just how consequential the ongoing voter suppression and disenfranchisement can be."

Only assuming the two candidates were consequentially different from each other in their proposed policies (rather than just their rhetoric), which is... arguable, to say the least.

These charts seem to support two of my viewpoints.

1. Minorities and immigrants really do have very different priorities than the British whites who settled the country, and the priorities of the settlers are ultimately going to lose.

2. The future of American politics will be tribes competing for resources, with no shared values.

It's a shame, because America really was a unique experiment in limited government until 1930 or so, unprecedented in history, and probably never to occur again.  The world already had plenty of socialist republics fractured along tribal lines; one more doesn't add anything new.

By the way, I'm well aware that women and minorities had the vote by the 1930s -- what I mean by disenfranchisement is the Jim Crow policies and violence that kept everyone but a certain set of white men from flexing their full political potential.

I would like to see the numbers for 18-21 year olds rather than 18-23 year olds, as it was this group that was enfranchised by Constitutional Amendment (as with women and freedmen before them) because, in this instance, it seemed wrong to force young men into a military draft to potentially die for their country without having the opportunity to vote.  As one of those who made this argument at the time, I am astonished to read remarks like, "How many 18-23 year olds really have the knowledge and maturity to make a decision regarding their own future, let alone the future of their country?"

These charts mean nothing

I wanna see one where white men wouldn't be allowed to vote.

No statistics based on sexual orientation?

the ongoing voter suppression and disenfranchisement can be????  Proof?