Voting for a Black President: 2008 and Tomorrow

Over at his blog, Made in America, Claude Fischer discusses data showing that the percentage of (White) Americans who say that they will vote for a qualified Black president has been rising since the 1950s. Today it sits at about 96%. 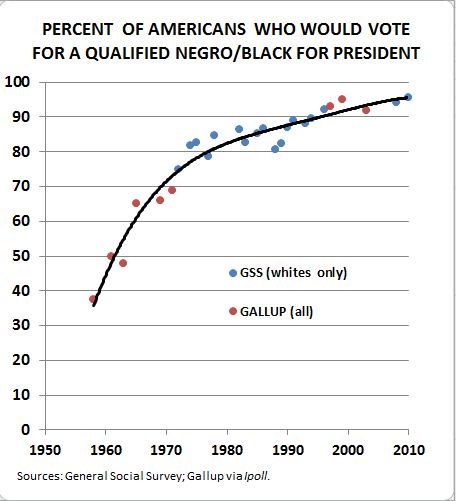 Fischer rightly observes that it’s difficult to know exactly what to make of this information. The trend likely reflects a combination of a real decrease in prejudice and a rising appreciation for the fact that it’s unpopular to admit that you wouldn’t vote for a Black person, even on a survey.

Still, assuming for the moment that it represents real attitudinal change, Fischer asks, is “the glass 96 percent full or is it 4 percent empty?”  Given our two-party partisan political system, elections are frequently decided by margins this narrow.  Obama won with just 53% of the popular vote in 2008.  Political scientists estimate that there was a 5 point racial penalty (that is, if he had been White, he would likely have won 58% of the vote).

Tomorrow is election day and it’s difficult to know if race will play more or less of a role than it did in the last election.  On the one hand, most people who were worried that Obama would be a racially radical President now know that he is not (some people will never be convinced) and others may have become more used to seeing an African American face in the White House.  On the other hand, racial progress usually incites a backlash.  That face in such a venerated position of power may have aggravated people who are now actively racist instead of complacently so.

Finally, as Fischer observes, we have absolutely no data on the penalty Romney will pay for being Mormon.

Happy election day eve, America. May we all end tomorrow with a strong beverage of consolation or celebration.

I suspect an additional issue is that many people hold "softer" racist beliefs - in effect it is a higher bar for a black politician to be considered qualified.  I expect this is in part a source of a lot of the comments about how Obama was "inexperienced" in 2008.  Such beliefs may not show up as results in this type of poll.

Another interesting thing to attempt to quantify is how many white people who are "moderates" and were not strongly decided based on Republican v. Democratic differences voted against Obama because the deciding factor was his race and how many voted for him because of his race.

It is a difficult thing to determine, how race will affect this vote. I also wonder how much novelty may play a role. The 08 election presented the chance to finally have our first black president. Whereas now, neither outcome brings that novelty.
D. Matthew Ray
Sociological Life

That last statement is quite surprising. Of course there is, FWIW, polling on whether Americans would vote for a Mormon candidate, with a similar time comparison that is much flatter: http://www.gallup.com/poll/155273/bias-against-mormon-presidential-candidate-1967.aspx

Now I'm imagining a science-fiction/social-satire scenario in which African Americans have come to dominate federal electoral politics, and this is widely attributed to having "natural political instincts."

The survey results are clearly the result of people misrepresenting themselves. More than 4% of Americans vote for unqualified candidates for president in every election.

How about voters who are neither white nor black? In my experience it's still more socially acceptable within some other minority communities to express overt racism.