Last week I posted about voter turnout patterns. In 2008, about 64% of eligible citizens voted. So what reasons do non-voters give for not taking part in the election? The Census Bureau asked. I created a chart of the data found on p. 14 of the report by Thom File and Sarah Crissey.

UPDATE: Please note this data is for registered non-voters; about 89% of this group votes, significantly higher than that for eligible citizens overall. I apologize that I didn’t make the distinction clearer in my initial post. 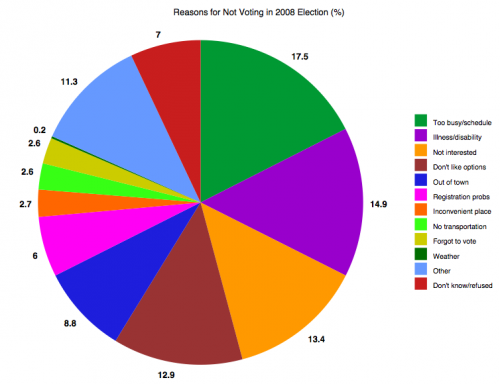 So the single most common reason (17.5%) for not voting was that the person was too busy or their schedule conflicted with available voting hours (at least those the respondent was aware of). Other common reasons were illness or disability (14.9%), the person just wasn’t interested in the election (13.4%), didn’t like the candidates or issues (12.9%), and other (11.3%).

Many of these barriers to voting could likely be addressed by the same basic changes: expanding voting options. Scheduling conflicts, being too busy or out of town, lack of transportation, and problems caused by illness or disability might all be ameliorated by expanded early voting and/or making it easy to vote by mail.

These issues were not equally problematic for all racial/ethnic groups. For instance, Asian-Americans and Hispanics (of any race) were more likely to report being too busy or that voting conflicted with their schedule than were White non-Hispanics or African Americans: 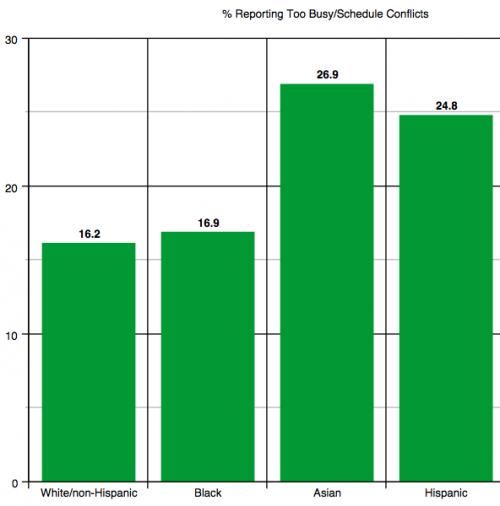 White non-Hispanics were more likely than other groups to say they didn’t vote because they didn’t like the candidates or issues: 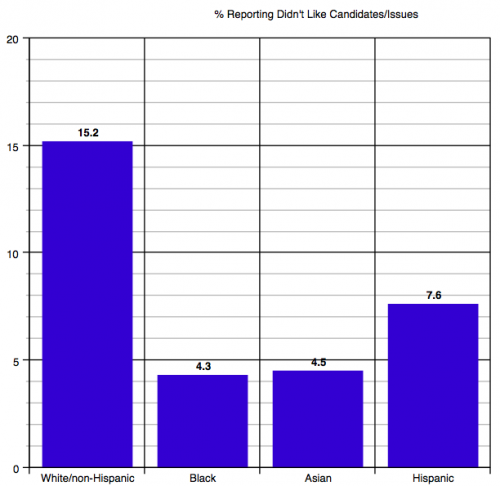 The report also breaks responses down by age and education, so check out p. 14 if you’re interested in the patterns based on those demographics. It also includes data on why people don’t register, either — the most common being lack of interest or involvement in politics.

I'm surprised there isn't a separate option for feeling as if your vote won't make a difference, as I'm from New York and I've found that to be a pretty common sentiment here since we are pretty much guaranteed to be a blue state.

Of course, "too busy" can also be a polite proxy for several of the other responses, such as "not interested" and "don't like options".

That's me this election. I wanted to early vote but I live in a rural area and have no transportation of my own. They recently moved the courthouse which was the early voting location to a new county and I had no way of getting there. I was going to vote on the 6th but I work a closing shift. I felt really upset but even with my vote my state leans red (I'm down south) so I'm pretty certain it wouldn't add anything.

[...] analysis (pdf) of voters and non-voters in the 2008 election. As Gwen Sharp of Sociological Images pointed out here, the census included a helpful breakdown of reasons that people gave for not voting. Here’s [...]

Too busy for a mail in ballot?

So, are all of the people caught up in the various 'disenfranchisement' buzzwords (e.g. ID requirements) included in the 6% of people who didn't vote because of 'registration'?

I think it's interesting that we still vote on a tuesday night when that is no longer the most convenient time for most people.  Tuesday was originally picked to avoid conflicts with church and farmers markets, both of which have become much more flexible, or even obsolete for many people.  Perhaps one way to eliminate the scheduling conflicts that prevent 17.5% of our population from voting would be to change the election day to something more practical, like a saturday, or maybe even to have multiple days dedicated to voting.  I realize that absentee ballots or voting early may be viable options for such people in place of changing the election day, but realistically, any system that requires extra work from the voter will prohibit voter turn out.

The weather!?! Are you sure this is the same country where they will sit for hours in the freezing cold and snow for a football game? I guess if there were extreme weather conditions preventing you from driving or walking. The inconvenient place one is a bit unfortunate. In Australia there are so many polling places including local public schools etc., it would it's hard to not be near one execpt maybe in really rural areas, and even then there are mobile polling officials that travel around in the lead up to election day and on it. Also in Australia you can vote outside your electorate [say if you want to vote near your workplace and it is not in you electorate]. I wonder about people complaining that they can't get to the courthouse
or wherever to vote. I am a US citizen living in Australia, I can vote
via post from all the way over here. I don't have to fly there to vote.
Surely the citizens over there should be allowed to vote early via post
or something if they do not have transport to the nearest polling place -  but maybe not and that seems unfair. So much could be done in the US to make it easier to vote for those that want to.

Oregon was entirely vote-by-mail for the 2008 election and had an 85% voter turnout, 21% above the national average and 25% above adjacent Washington State. I think that supports this breakdown pretty well.

How do so many registered non-voters have registration problems?

Wouldn't it be better to simply call election day and counting day as "free"?

That's what they do in my birth country. Of course, there are professionals that can't miss their jobs (i.e. doctors) but I hear they make special provisions for them like change in shifts and so on.

Voter turn out is around 75%-92% if I remember correctly what was reported in the last 2 elections.

“The worst illiterate is the political illiterate, he doesn’t hear,
doesn’t speak, nor participates in the political events. He doesn’t know
the cost of life, the price of the bean, of the fish, of the flour, of
the rent, of the shoes and of the medicine, all depends on political
decisions. The political illiterate is so stupid that he is proud and
swells his chest saying that he hates politics. The imbecile doesn’t
know that, from his political ignorance is born the prostitute, the
abandoned child, and the worst thieves of all, the bad politician,
corrupted and flunky of the national and multinational companies.”

― Bertolt Brecht  We need an informed society and the best way to get there is the Free Democratic Republic.

[…] Sharp, from The Society Pages, put together a pie chart based on some of the most popular responses found by the Census Bureau when it surveyed non-voters […]

ToiletCubicle.co.id is a respected commercial toilet cubicle manufacturer and understand they need to reflect your company or establishment image in ... tap https://medium.com/@toiletcubiclephenolic/cubicle-toilet-phenolic-tangerang-selatan-ukuran-per-m2-custom-murah-26584853b519 to go further.

KontraktorEpoxy.co.id is just a founder in the distribution of niche epoxy and memory services and products for concrete restoration, primers, sealers, UV stable and cementitious systems.... visit https://kontraktorepoxygaransi.blogspot.com/2019/11/jasa-injeksi-beton-garansi-cianjur_27.html for detail.

PabrikPintu.co.id are probably the leading door manufacturer and companies found in Indonesia intended for facade and even premiums room doors, produced in substantial solid wood, powder ... visit https://distributorfoldinggate.blogspot.com/2020/01/distributor-jual-pintu-folding-gate-1_74.html for detail.

We provide private lessons for PAUD, TK, SD, SMP, SMA, and Alumni. With a and accelerated method, it is actually hoped that this will foster an era of those that have good morals... for more information https://fisika-exed.blogspot.com/2022/04/les-privat-fisika-di-mampang-temurah.html

Executive-Education.id is usually the ideal resolution for mothers and fathers throughout alleviating the trouble connected with children'utes finding out achievements in at a standstill schools. By using lessons... click https://privat-jabodetabek.netlify.app/les-privat-kemayoran.html for further

Unlike bimbel, private tutoring provides a way for children to learn more intensively because one child is barely taught by one teacher... visit https://kursus-jerman.vercel.app/kursus-bahasa-jerman-penjaringan.html for more details

Executive-Education.id is the foremost private tutoring service in Jabodetabek, with professional and qualified teachers that are ready to visit the student's location or home... click https://kursus-mandarin.vercel.app/kursus-bahasa-mandarin-bangka.html for more details