Why Do We Vote on Tuesdays? 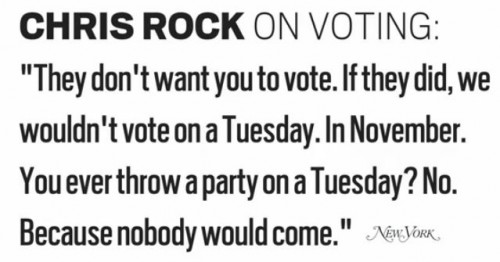 We’re in the home stretch of the presidential election here in the U.S. Many of us now live in states that allow early voting or mail-in absentee voting, but Tuesday, November 6th, is officially Election Day.

In this short talk, Jacob Soboroff explains the history of why we vote on Tuesdays: in 1845, Congress passed a law setting an official voting day, and didn’t want people to have to travel on Sundays or miss Wednesday market days and so on and so forth, and eventually they settled on Tuesday as the best day to accommodate the travel times required to get places in horse-drawn buggies so people could vote with the minimum disruption to their lives.

And so we still vote on Tuesdays more than a century and a half later, even though, as Selena Simmons-Duffin of NPR pointed out in a story this morning, a lot of critics argue that it reduces voter turnout due to the difficulty of getting off of work to go vote in states that don’t allow any type of early voting.

Wait, so you're saying that we don't live in 1845 any more, that there are these things called "cars" and "trucks" that can transport people faster and farther than anyone in 1845 could have imagined? That there is this thing called the Internet that allows for near-instant responses?

I don't believe it!

Next you'll be saying something like our military doesn't use horses and bayonets anymore, or that steam-powered gunboats don't form the backbone of our navy.
/snark

And in this way, we can further suppress the turn out of poor people who do shift work, such as retail! Yay! But if you work a 9-5, M-F job, I'm sure that makes it easier.
I think convincing people their vote matters -- or, you know, making sure their vote actually DOES matter, hello Electoral College, would go a long way to voter turn out. And finding a way not to wear down the average American citizen for months and months until November until they just want it to go quietly away.

I understand why Tuesday is a highly inconvenient day to go vote for many people, but what's wrong with November?  Does it have to do with the cold weather in a lot of states?

At the very least, you should have the polls open late enough that people can go after work.

They close at 10pm in England - most people can manage to vote sometime between 7am and 10pm.

Yeah, it is just so difficult to vote, yet somehow hundreds of dead people manage to every election.

I think that the Onion parody may have ruined TED talks like this for me  forever. There were about three sentences worth of actual content in that talk that he took three minutes to get to.

In South Africa it's declared a public holiday when we vote.

Isn't the correct title, "Why do people in the  United States vote on Tuesdays" It's somewhat amusing to see "we" denotes the States in all of the English speaking "Internets"

Which makes you wonder: why haven't anyone thought of giving the day off for voting? It's one of those basic things you can do in order to get more voters.

I've always wondered why Americans vote on a Tuesday. Here in Oz we vote on a Saturday (no matter what election it is, state, federal or local), and there are early voting centers open for weeks before hand, including one late night and on Saturday.  On top of that elderly people or people with a disability, or those not in the electorate at the time, can send in a postal ballot.

They seem to make voting as easy as possible here - that said it's compulsory, and there is a fine if you don't vote.

Changing it to a weekend when the majority of low-income people work every weekend seems like a very "conservative" choice.  Why does it have to be one day?  Why not a week?  Then there truly is no excuses.