The Price of Opportunity

Back in June, Mitt Romney said:

I want to make sure that we keep America a place of opportunity, where everyone… get[s] as much education as they can afford

After all, Mitt got as much education as he (his parents, really) could afford, so he thought it best if everyone had that same opportunity.

Opportunity – How much is that in American money?

Yesterday, Planet Money  posted this graph showing the costs and benefits of a college education in several countries. 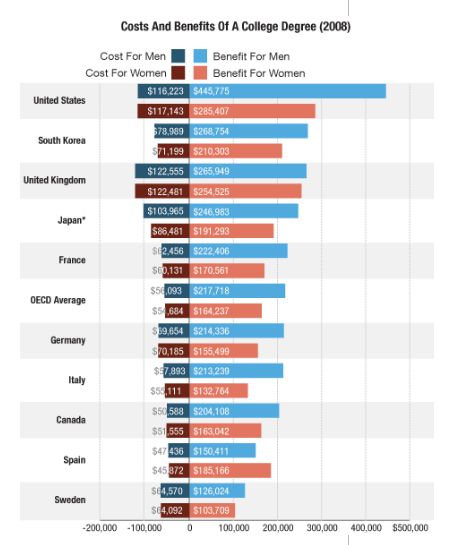 The title of the post summarizes the interpretation of the college-educated folks at Planet Money:

“College Costs More In America, But The Payoff Is Bigger”

But what if you look at the data from the other side?  Here’s the half-empty-glass title:

“College in the US Costs a Lot, and If You Can’t Afford It, You’re Really Screwed”

…or words to that effect.

What the chart seems to show is inequality — specifically, the inequality between the college educated and everyone else.  In advanced economies, like the those of the countries in the chart, education is important. But some of those countries, like the Scandinavian countries, have reduced the income sacrificed by non-college people relative to the college educated. Other countries favor a more unequal distribution of income.

To look a little closer, I looked at the relationship between the payoff of a BA degree for men and a country’s Gini coefficient, a measure of inequality.  I used the ten countries in the Planet Money chart and added another ten OECD countries. 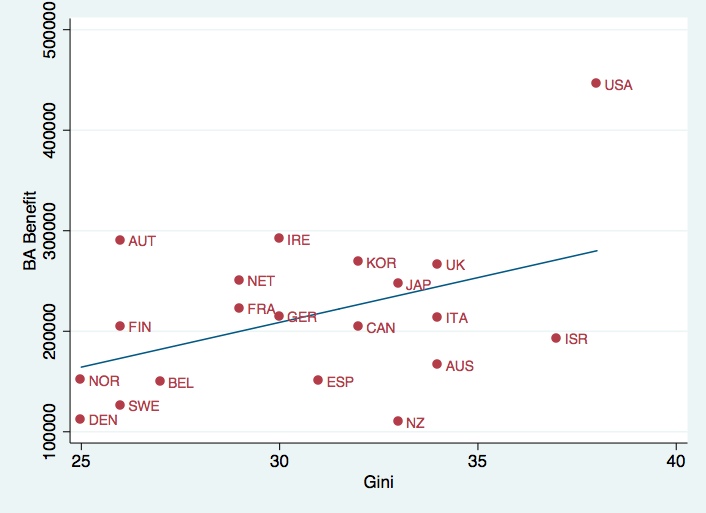 With this inequality come the kinds of social consequences that Charles Murray elaborates in his latest book about non-educated Whites — disability, divorce, demoralization, death.

The question is, why would anybody pay attention to what Charles "The Bell Curve" Murray -- or, for that matter, any of the self-discrediting "scientific" racists have to say about society at all?  Never mind that he self-identifies as a "libertarian economist," which basically means he not only assumes the cows are spherical, he'll tell you to your face that they actually *are.*

If you included brazil, it would be the clear outlier too.

The problem with what Mitt said is this - if you can't afford college, then you don't get to go. How is this equal opportunity? If you're smart enough to get in then you should be able to go - without acquiring enough debt to make you're bumped up salary null and void.

One thing to consider when comparing countries in this graph - they take into account "lost income during years of schooling" in their costs of education. Given that both prevailing and minimum wages differ hugely between these countries, that would seem to significantly change their calculated overall cost of an education, simply because more income was available to be earned.

I know that in straight tuition, a four year degree at a state university in the US is more like $40,000. Still significant, but much lower than $116,000. I assume it changes the numbers a fair amount for the other countries as well. Of course, that could be seen as an advantage to welfare states - that people will have their living paid for so they can focus on tuition costs.

It's interesting that in Spain, a degree is more beneficial to women than to men. It says a lot about how and why our economy grew 1995-2008: in short, there was a construction boom that encouraged boys away from education.