Overview of the Social Construction of Race 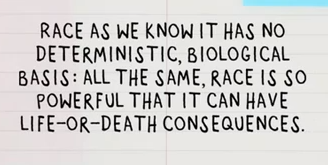 Dalton Conley’s newest animated video provides an overview of the social construction of race: the categories we define as race aren’t based in biology, yet they’re incredibly important factors that influence our opportunities, constraints, and life outcomes.

OVERVIEW OF THE SOCIAL CONSTRUCTION OF RACE « Welcome to the Doctor's Office — October 9, 2012

What does "Race as we know it has no deterministic, biological basis" even mean, and why is it relevant?  The video doesn't tackle that at all - at best it serves up several ways in which societies have reacted to race differently throughout history (apparently black people still existed, it's just they had a big freckle? Ugh.  That still means race existed and in no way clarifies how race is just a social construction.)  How we treat race is of course a social construct.  That races exist (however loosely defined) is still a matter of biology.

"Race is biological" implies that people of a certain "race" share common biological characteristics, as demonstrated in shared genetic patterns. But this is not the case. Separating people into different races because they look different, is essentially the same as believing the world is flat because it looks flat.

The video didn't "tackle that at all" because it has been pretty common knowledge since 1972.

Some commentaries on the video:

- It’s amusing to note that Conley of course avoids mentioning the African-Americans in the context of American society, if only to avoid the depressing sight of seeing Civilized, Educated and Rational Americans *insist* that no, that’s not why we discriminate against Black people, they’re *inherently* inferior, that’s why they get less opportunity….
- Why did I get the impression that Conley thinks “erasing” race is a good idea? Because, you know, based on this site’s own commentary on colorblindedness, there are reasons why a lack of racial awareness and literacy is a bad thing.

yeah, i didn't like this video very much.  it's not entirely ahistorical, but it seems both superficial and euro-centric in its nods to history.  and the relationship between racism and economic exploitation is not acknowledged.  it's a very narrow view, but a text that is as interesting for its own ideology as what it's purporting to reveal...

Are
you suggesting  that  because racism is wrong on an ethical level we
should abandon studying human variation? This seems silly to me. If you
are not saying that, then, no, you are not being clear.

No.  I have no idea how you could have read this:

racism is wrong for moral reasons independent of empirical facts about human genetics; nothing we could possibly learn from human genetics would make racism morally right.

and come to the conclusion that I am advocating abandoning human genetics for political reasons.  I argued there that the attempt to link the scientific question of human genetic variability with the moral question of equality before the law is totally philosophically confused and likely to backfire as well.  We should indeed continue to study human variation.

The paper you reference is not available to me, and the abstract makes no mention of "race" at all.

The paper demonstrates that it is possible read a bunch of SNPs from an invididual genome and predict the geographical ancestry of that genome.   Furthermore, the between-group sum of squares is often much greater than the within-group sum of squares: two people from Oceania will be much, much more genetically similar than a person from Oceania and a person from the Middle East.  Hence it is not accurate that 85% of variation occurs within geographically distinct groups, when you take into account that a genome is not a single locus.  Take another look at that PCA plot I linked (it is not behind a paywall) and tell me what you see.

A
debate has arisen regarding the validity of racial/ethnic categories
for biomedical and genetic research. Some claim 'no biological basis for
race' while others advocate a 'race-neutral' approach, using genetic
clustering rather than self-identified ethnicity for human genetic
categorization. We provide an epidemiologic perspective on the issue of
human categorization in biomedical and genetic research that strongly
supports the continued use of self-identified race and ethnicity.

The authors consider if and how people should be classified in research trials, given that people of different ethnicities have different propensities to different diseases and somewhat different responses to drugs.  It turns out that just asking people to self-report their race provides more accurate genetic classification than sequencing a few SNPs and clustering the results.

That last sentence captures my own view pretty well, I think.  Races are not immutable natural kinds, like carbon and nitrogen.  They are more like centers of mass in genome space.  Nevertheless they do track genetic differences, if imperfectly, and those differences are useful for answering questions like "what disease is a patient with these symptoms most likely to have?"  "What drug is this patient most likely to respond best to?"  "How should we design our research trial to ensure that our results will generalize to the population at large?"

[...] “Racial divisions are perpetuated in the interest of groups that wish to maintain power and social exclusion.” A very succinct overview of the fact that race is a social construct. [...]

At the risk of sounding somewhat offensive to a few commenters here: there is no argument as to whether there is such a thing as biological race. No, there is not, and this has been widely known for something like 30 years. The only purpose of the video was merely to give a short history of how races were classified (or not) throughout history, not to disprove the idea that humans can be classified into distinct races based on their appearances or genes, as this has been done and done and done already. Arguing endlessly about whether or not distinct biological races exist in the comments of this video is about as stupid as going to a holocaust museum just to talk at other visitors about how the holocaust never happened. The basis of a reasonable argument for your views could not possibly be found in the reality we live in, which is why nobody else is having that argument.

Biological race is a fantasy, but regardless of the long-standing genetic knowledge that says exactly that, I think it should be pretty apparent after seeing a fair sampling of humanity. Skin tone, hair texture, and facial features, which are largely what our western classification of social race is based on are not only on gradients themselves, rather than distinct differentiable categories, they also don't match with each other in any particular way. It's possible to have light skin and curly hair, dark skin and straight hair, dark skin and mono-lidded eyes, light skin, double-lidded eyes, and have sickle cell anemia and so on and so forth in endless combinations of physical traits and genetic material that make it impossible to categorize races in any meaningful way. Of course one can study the genetics of humans, but what you find won't match up with any system of classification of social races that we currently have, because any attempt to classify humans into such rigid, arbitrary, and unscientific categories based on gradients of physical characteristics of which any human can have any combination is going to be about as succesful as trying to eat water with a fork and knife.

[video] Overview of the Social Construction of Race « slendermeans — November 19, 2012

Who counts as Asian? (Or, the social construction of race and the continents) | The Plaid Bag Connection — May 4, 2013

Overview of the Social Construction of Race | feimineach.com — May 31, 2013

[…] Overview of the Social Construction of Race […]

Where did this video go????