Frances Stead Sellers at the Washington Post has a fascinating account of the differences in Black and White American sign language.  Sellers profiles a 15-year-old girl named Carolyn who in 1968 was transferred from the Alabama School for the Negro Deaf and Blind to an integrated school, only to learn that she couldn’t understand much of what was being signed in class. 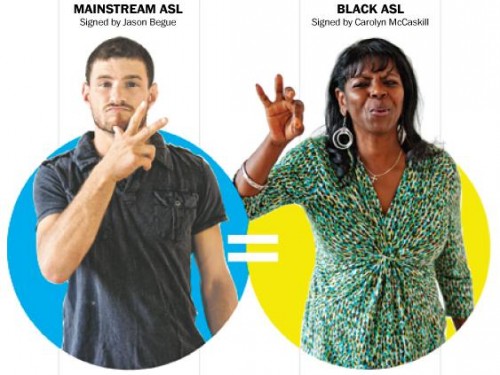 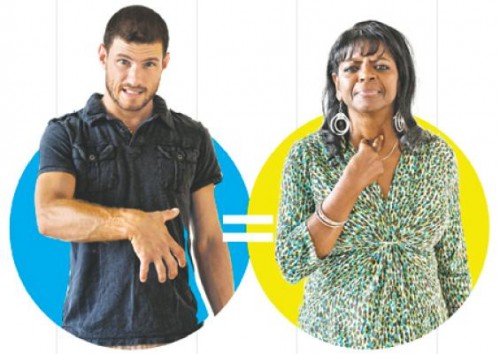 As is typical, the White students in the class did not adapt to Carolyn’s vernacular; she had to learn theirs. So she became bilingual.  Sellers explains:

She learned entirely new signs for such common nouns as “shoe” and “school.” She began to communicate words such as “why” and “don’t know” with one hand instead of two as she and her black friends had always done. She copied the white students who lowered their hands to make the signs for “what for” and “know” closer to their chins than to their foreheads. And she imitated the way white students mouthed words at the same time as they made manual signs for them.

Whenever she went home, [Carolyn] carefully switched back to her old way of communicating.

These distinctions are still present today, as are the White-centric rules that led Carolyn to adopt White sign language in school and the racism that privileges White spoken vernacular as “proper English.”  For example, referring to the way she uses more space when she signs, student Dominique Flagg explains:

People sometimes think I am mad or have an attitude when I am just chatting with my friends, professors and other people.

The little girl who transferred schools and discovered that White people signed differently than her is now Dr. McCaskill, a professor of deaf studies. You can learn more about the racial politics of American sign language from her book, The Hidden Treasure of Black ASL.

[...] One more – and an interesting note about racial differences in vernacular uses in ASL. [...]

I read this site for a certain perverse enjoyment of its simplistic logic and use this post as a prime example:
"As is typical, the White students in the class did not adapt to Carolyn’s vernacular.." and why would they? If I joined a class or a group which spoke differently, I'd expect, for the sake of better communication, to have to speak like them if I'm not understood. "and the racism that privileges White spoken vernacular as 'proper English.'" Calling it "proper" may be "racist" or not, but again, the majority's syntax and pronunciation are , quite logically, the norm. It is actually, not necesarily 'privileged', as note (for example only,) any number  of professors from India whose careershardly limited by their not speaking "proper" English (though I'm sure their writing conforms.)In both cases above, the use of 'racist' is simplistic. If Carolyn happened to be, say a Canadian white signing English with different syntax, the same result would've derived. Is she were a Quebecois who joined the Sorbonne, she'd have to use Parisian vocabulary. I a non-white not US born and no doubt over the years of living in the US, my accent and words have changed to ease communications, not because I'm kowtowing to the privileged class.I would be much more interested in *why* and *how* such differences evolved, especially in a subgroup like this. No doubt Dr. McCaskill has explanations in her book. Now a review of *that* would be worthy of a discussion which may, indeed, underscore the racism inherent in its origins.

Very interesting. I would be curious to see if Dr. McCaskill also discusses geographical differences in how certain signs are created. While I was taking ASL courses I encountered a few signed that changed between two neighboring cities.

I am also curious as to whether Dr. McCaskill would consider someone who can sign Mainstream ASL and Black ASL to be multilingual or simply adapt at switching between dialects.

This sentence is really confusing because you make it sound as if a girl who is 15 in 2012 has discovered some kind of time travel machine and is able to transfer to a new school in 1968. "Sellers profiles a 15-year-old girl named Carolyn who in 1968 was transferred from the Alabama School for the Negro Deaf and Blind "

New students in ANY school typically adapt to the styles (both in dialect and in fashion) of the established students. Not everything is about race.

I am not sure this is much different than my canadian boyfriends thinking I am yelling at my portuguese mother when we talk on the phone because we speak faster and lowder (complete with lots of hand gestures, which makes no sense when talking on the phone...) than when I speak in english to him.

The analysis is misleading: "As is typical, the White students in the class did not adapt to
Carolyn’s vernacular; she had to learn theirs. So she became bilingual."

Black vernacular ASL is not a whole language. It is a variation of ASL.  To be bilingual requires two whole languages.  If you had said "bicultural", then you may have a case.

There are a lot of ways to analyze this topic: talking about privilege within the deaf community (white ASL as being the "dominant language for the deaf", linguistic diversity within linguistic-minority in a larger dominant white/academic English-run society, and more).

[...] “Black & White Vernacular in American Sign Language”October 9, 2012 By evetushnetInteresting in its own right, and I especially wonder if the comment about the black ASL sign for “pregnant” is [...]

We Americans have often not appreciated the marvelous advantages of being multi-lingual. In Europe and Africa where I travel and work frequently, most people are proud of the many varieties [dialects] of language that they can communicate in. This does not have to be the divisive and conflictual discussion over whose language is preferred, and it should never be a excuse to overlook the fact that we devalue and demean people by disparaging their languages.

I felt the same way when I moved to Texas from California. I was severely disappointed that my presence didn't cause everyone to stop staying "y'all" and use the "you guys" that I grew up around.

The depression crippled me for years.

So does Lisa feel "When in Rome" horribly racist?

[...] Wood and Hannes Koch in 2005.— 5 —Eve Tushnet linked to a totally me-bait story on the variations in ASL between the African American and white Deaf communities.  I don’t know much about these linguistic divisions, but  my favorite ASL dictionary [...]

How did you people ended up with two sign languages depending on race?!

[…] Lisa Wade also talks about this post over at Sociological Images. […]