Gender, Race/Ethnicity, and the Pay Gap

The Washington Post has a post up by Dylan Matthews that looks at the U.S. gender wage gap over time. It has several charts that illustrate trends in pay very clearly. Here’s a breakdown of median income (in constant 2010 dollars) by gender and race/ethnicity, for all workers, both full- and part-time: 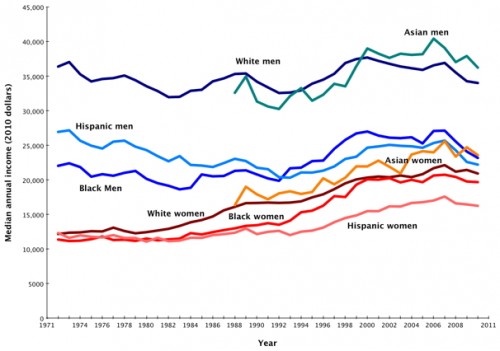 The gap remains for full-time, year-round workers, too. Women have gained ground, but within every racial/ethnic category, women’s median income is lower than men’s and every other group earns significantly less than Asian and White men. However, there’s a clear racial earnings hierarchy visible in the chart as well, which isn’t getting nearly the attention that the gender wage gap is: 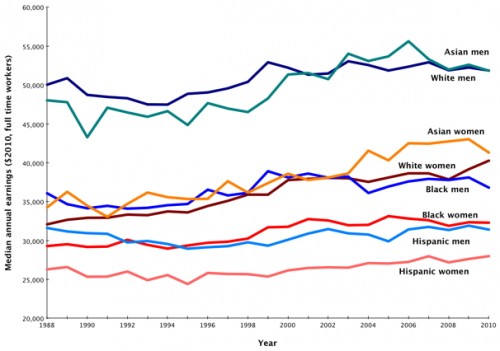 Moreover, the income bump received from earning a college degree is still higher for men than for women: 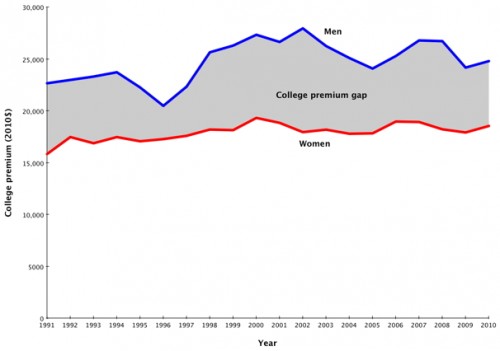 There are additional charts further breaking down differences in pay among men and women in the original post. As Matthews argues, and as Philip Cohen has posted about here at Soc Images, the data just don’t support the “impending female economic dominance” narrative that has become popular recently.

Would be interested to see the college premium gap by major and years of experience.

So according to this graph, Asian Americans are the highest earning Americans. So in a way, there is no racial gap for them at all. They outearn whites.

GENDER, RACE/ETHNICITY, AND THE PAY GAP « Welcome to the Doctor's Office — October 4, 2012

Gender is just a social construct.  This data is meaningless.

Very interesting, easy and useful for everyone. Thanks for
sharing.

Interesting how the myth of "white privilege" persists when both Asian men and women have been at the top of the heap for quite a while now.

[...] a higher wage than any of those minority groups you mentioned due to pay discrimination based on race and sexual orientation. And that’s just the tip of the iceberg of privilege you will receive in [...]

This indicates that all the asians coming to America are either studied or coming to study here...seems asians without a good degree either cannot survive or come here... The cream pie of the Asians are coming to America for better life....
so the average asians are way below than White men...
For better comparison we need to compare Top 3% of White Men to the Asian Men. in that case definitely Asians are way below than White Men. b`coz most of the Asian men in USA are either well educated or high status people in their respective Countries (Not in USA).

[...] a lesson.  Women of color are double disadvantaged by their color and sex, and this is shown in plenty of research data for those interested in [...]

Why isn't this website up in arms about white men earning less than asian men? Because they are ANTI WHITE.

These Are The 3 Cities Where Women Earn The Most Money | Doohickey — February 5, 2014

These Are The 3 Cities Where Women Earn The Most Money | Breakfast Daily News — February 5, 2014

These are the three cities where women earn the most | BUSINESS TRAVEL — February 7, 2014

[…] earns on average, the wage gap fluctuates depending on professional field, education level and ethnicity. But new data also shows that location is a major factor in women’s […]

Article two: WHAT IS THE ROLE OF MEDIA TECHNOLOGY IN DEMOCRACY? | Poverty And Wages — July 24, 2014

I don't understand how this 2010 data includes Hispanic, since Hispanic was not a race category on the 2010 census...

To address the Asian comments here. Immigration policy in the US for decades has made it very easy for highly educated Asians from specific countries to migrate to the US. This has inflated the Asian category making inequality studies that focus on Asians useless unless it is broken down by country or education. When you look at research on Asian Americans whose families have lived in the US a long time, or look at Asians who migrated here from countries like Burma, Mongolia, Lao etc (ignoring the highly educated funnel our immigration policy creates) then you will see the exact same inequalities present with other minorities on this graph.