As we enter the home stretch of the presidential campaign, there’s a steady stream of media discussions of potential turnout and differences in early voters and those who vote on Election Day, analysis of the demographics of swing states, and a flood of campaign materials and phone calls aimed at both winning us over and convincing us to actually go vote (those of you not living in swing states may be blessed with less of this).

So who does vote? And how many of us do so?

Demos.org recently released a report on voting rates and access among Native Americans. It contains a breakdown of voting and voter registration by race/ethnicity for the 2008 presidential election. That year, about 64% of all adults eligible to vote in the U.S. did so, but the rates varied widely by group. White non-Hispanics and African Americans had the highest turnout, with every other group having significantly less likely to vote. Half or less of Asians, American Indians/Alaska Natives, and Hispanics voted: 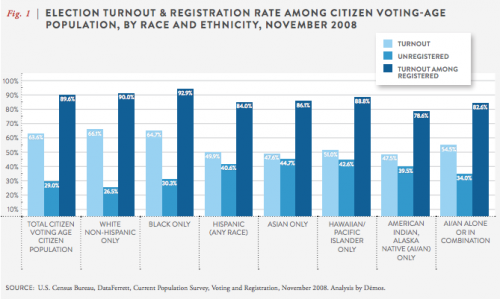 For every group, the vast majority of those who register do go on to vote. But significant numbers of people who have the right to vote aren’t registered to do so, and even among registered voters (the darkest blue columns), turnout is higher among White non-Hispanics and African Americans than other groups. This could reflect lack of interest in or enthusiasm for the election or the candidates, but likely also reflects structural and organizational differences, from poverty to the lack of concerted efforts by campaigns to make voting easier by providing shuttles to the polls and otherwise getting out the vote in these communities.

RACE/ETHNICITY AND VOTER TURNOUT « Welcome to the Doctor's Office — October 3, 2012

As a student, I would love to see a similar breakdown by age. Does anyone know of such a study?

Where does one find the list of enfranchised citizens who aren't registered to vote, and who attaches the racial identifier to the people on that list?

The Changing Face of the Northwest Electorate | Sightline Daily — November 27, 2012

[...] the electorate itself will follow the same trends. In the 2008 election, most minority groups had lower voter-registration rates, and lower voter turnout, than non-Hispanic whites. If this minority voter under-representation continues, then the [...]

Washington Liberals - The Changing Face of the Northwest Electorate — November 28, 2012

[...] the electorate itself will follow the same trends. In the 2008 election, most minority groups had lower voter-registration rates, and lower voter turnout, than non-Hispanic whites. If this minority voter under-representation continues, then the [...]

People may not understand that tow services can include more than transporting an automobile in one spot to another. The fees charged can vary depending on your own ... click https://carcarrier.netlify.app/car-carrier-jakarta-jogja.html for detail

Here at KontraktorEpoxy.co.id we could meet all your epoxy needs. We specialize in every purposes of layer stated within our companies section. We have the capability to turn any older... click https://epoxy-lantai-gudang.blogspot.com/ for detail.