Generally speaking, gender equality in the U.S. and other Western countries has involved women moving into men’s spheres.  We have not seen an equivalent migration of men into women’s spheres.  Accordingly, while women have integrated many male occupations (they are now, for example, 50% or more of law and medical students), many female-dominated ones remain heavily female.

This is perhaps nowhere more true than in early childhood education.  In a story about male childcare workers at Organizations, Occupations and Work, Lata Murti reports that only 5% of child care workers and 3% of pre-school teachers are male.  Numbers are also low in other Western countries.  In Germany, the average is 3.5% (and this includes all employees of child care centers, including custodians). 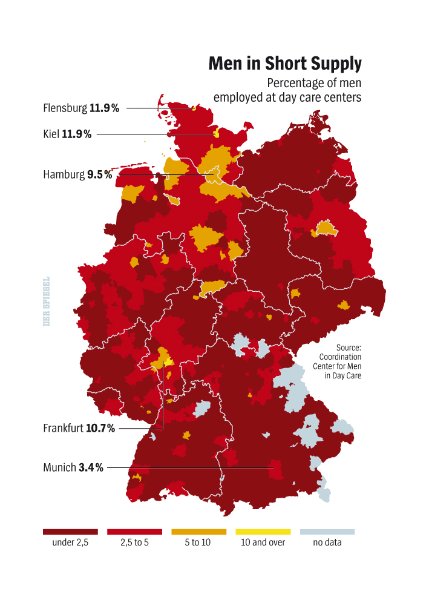 So, Spiegel Online reports, Germany has decided to try to do something about it.  Aiming to increase the percentage of men in child care to 20%, the government is spending 13 million Euros on a “More Men in Early Childhood Education and Care” program.

The state isn’t doing this, though, solely out of a passion for gender equality or a soft place in their heart for men holding babies.  They’re doing it because Germany has promised that there will be a spot in a day care center for all children when they turn one year old.  To fulfill this promise, they need more day care workers badly; recruiting men means that that other half of the population might fill out the profession.

I have a male friend who teachers elementary school in the inner city. He said he has almost no troubles with discipline because the kids are just amazed to have a male teacher. Given that most of these children are also being raised by mom and grandma, he's pretty much the only male authority figure they've encounter in their lives to that point.

While a good friend of mine is a male kindergardener, generally I'm against this. Why? In most other positions that give easy access to children (e.g. youth camps, sports coach, Church groups), both the US and Germany have had more than enough sexual child abuse by men. It is just highly attractive for pedophiles to search job positions which grant access to children and in which being a lot around children is not suspicious.

Your sentence "We have not seen an equivalent migration of men into women’s spheres" is not really true: Even the New York Times has already reported about this. See here: Article title "Increasingly men seek success in jobs dominated by women".
http://www.nytimes.com/2012/05/21/business/increasingly-men-seek-success-in-jobs-dominated-by-women.html?pagewanted=all

I have seen the advertisements for this – they're actually pretty awesome. They generally follow the theme of some mid-twenty guy in casual clothing with a shirt listing a wide range of jobs - "architect, physicist, guitar player, cook, story teller, …", and then the catch phrase: "be everything - be a child care worker".

The contrast between the Northwest and the South and East(*) parts of the country is quite remarkable, by the way --  mind you, I have studied one year in Munich and I love Bavaria, but they can be pretty conservative at times.

(*) Yellow spots at the East: Berlin is the biggest, then to Berlin's south come Leipzig and Erzgebirgskreis, I believe.

Attempt the second - won't let me delete old comment. Anyway, I can't find linkage for it but there have been some UK based schemes to recruit men into primary schools to encourage children to stop thinking of education and reading as a woman's thing. Not sure if it's currently in operation but male primary school teachers can find themselves headhunted by schools I understand from friends experiences.

for those of you who read German, I highly recommend a recent PhD on exactly this issue: men/masculinities of male kindergarden teachters in Germany. The study was done by Anna Buschmeyer; http://www.gender.soziologie.uni-muenchen.de/personen/wiss_ma/buschmeyer_anna/index.html; and just awarded the Prize for the Best PhD in Sociology by the German Sociological Foundation.
Anna takes a close, qualitative look at exactly the prejudices/discourses mentioned in the thread below: being thought of as either gay or pedophile; being addressed as macho man (finalyl someone to fix the light here, finally someone to play real soccer with the kids, etc.); and she especially looks at how the men themselves struggle with all this, trying to come up with masculinities that make more sense to them.
great piece of work!!

Yes the whole campaign is a good idea and nicely done, but there won't be real results until this type of work effectively pays more. The main reason that men do not go into these jobs is not because they would feel less masculine or fear to be seen as pedophiles; the main reason is that because this is the type of work gendered as "female", it pays considerably less than "male" work and offers few career opportunities. Which, in turn, means that a man doing this kind of work will also be less likely to fulfil his role as breadwinner for the family - which many men would still consider their job, regardless of their profession. Gender roles play into the issue on multiple levels.

An ad campaign will not change all this, it rather serves as a prop for local government to show that they care. However, if they really did care, Hamburg (they did the ads which Jorgen links to) should maybe stop throwing huge amounts of money out the window for megalomaniac projects (cf. Elbphilharmonie) and "developing" quarters for rich people, and pay educators more.

The sad thing about all this goes entirely unmentioned - that sadly, the German government is trying to get more children into the country's day care system.

This depressing thought completely overshadows the gender issue about day care workers, for me. Poor kids.

Hey Dr. Wade, this is such an enormously poorly reported one sided load of horseshit.

Then in the 80s, came McMartin and assholes like you with stranger danger validating every fear of men in the classroom there could be.

And now it is very hard to find men to come into a classroom or pre-school. And in the UK, we even see instances of men being kicked out for Muslim sensitivities.

So here comes you with your bullshit sosh phd to tell us about Germany, but nowhere do you even mention the issues that men that do want to teach have had either in the US, or the UK, or in Germany.

[...] care of children. Sadly, this appears to be the norm globally, although I did find on the Society Pages that Germany has decided to try to do something about it. With a new program “More Men in Early [...]

Well written Lisa. Love reading this post that make us realize the issues or can say the reality going around world.