A Century of Voting Patterns 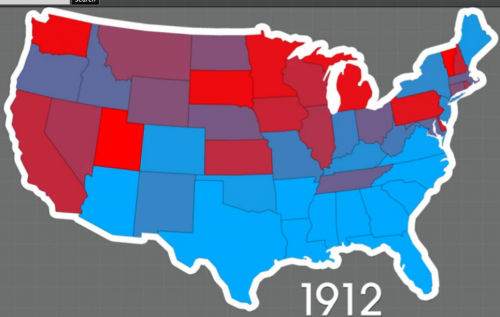 Salon posted a video by Benjamin Wheelock that illustrates changing voting patterns in the U.S. over the last century. He assigned each state a color based on voting for presidents, governors, and Congress for each year there were elections. Red indicates Republican, blue is Democratic; the darker the color, the more overwhelming the vote was for that party.

The video starts with 2011 and moves backward to 1912. What’s perhaps most striking today is that through the late 1970s, the South was a swath of Democratic blue. In the 1980s much of it turns purple, as presidential elections increasingly go Republican but Dems remain competitive in state elections. By the 2000s, it becomes much more solidly, and brightly, red as Republicans consolidate their popularity in the region.

It’s a quick way to highlight many major trends and turning points in U.S. political history, including changing stances on racial issues within the parties, the Democrats’ overwhelming dominance during the late ’30s as the country struggled to emerge from the Great Depression, and the clear shifts in the South and on the coasts over time.


Thanks to my colleague Pete for pointing it out!

This series neglects third parties to the point of irrelevance. Dixiecrats carried states in '48. In '12, the Bull Moose Party carried more states than the Republicans. Ross Perot got nearly 20% of the vote in '92. This binary as a historical record delegitimizes current third parties in pretending that third parties haven't played an important role in shaping our current system.

Would be fun to compare it against measured philosophical and policy changes among the electorate, and see how much the people changed versus how much the parties changed.

There's more than just two parties! You don't have to choose just one or the other! Why don't people get that?

A CENTURY OF VOTING PATTERNS « Welcome to the Doctor's Office — September 25, 2012

It appears that the darker the color, the LESS overwhelming the vote was for that party, if the scale in the video is any indication. The more overwhelming votes are represented by the state being more saturated with its respective color.

I agree, the colors chosen could have been better to more clearly illustrate what they stand for. Also, I would find it more useful if the video came forward through time, instead of going backward.  As it is I'm not sure this showed me much. Good effort, maybe needed some tips from a more experienced person in graphical representation of data.

What I find interesting is that 2008 and 2012 are really the first set of elections in which 1950s and 1960s Southern Democrats - as a major political voting group - have effectively disappeared. The only two times that the Dems won the South (since LBJ passed the Civil Rights Act and Jim Crow laws were overthrown) was with Carter (1976) and Clinton (1992 and 1996), who were both former governors of Southern states (Georgia and Arkansas, respectively) and still had major groups of people that had voted Democratic previously. In the 32 (or 36) years since Carter's election and the 16 (or 20) years since Clinton's election, the number of Southern Democrats have diminished significantly. This significant diminution was seen in 2010, when Southern Democrats were swept out of power in Washington as well as in state capitols.

What's interesting (at least for me) is that neither Obama nor Biden are from the South (contrast this with 2004 when Kerry brought Edwards onto the campaign - with many saying it was to court Southern voters), and it's the first Democratic ticket that didn't include a Southern candidate since 1984 (when Mondale and Ferraro ran futilely against Reagan's massive sweep, and you have to go back to the failed 1968 Democratic bid of Humphrey and Muskie for the next; yes, I'm including Maryland as a Southern State, which is why I didn't stop at McGovern/Shriver in 1972).

What's also interesting is that Obama and Biden didn't need to win any Southern states in 2008 to win (contrast with Carter and Clinton); MD, NC, VA, and FL could all have gone for McCain/Palin, and Obama/Biden would still have won.