Religion and Race among Democrats and Republicans

Peter N. sent in some data compiled by Chris Cillizza of the Washington Post.  It reveals the intersection of race and religion among Democrats and Republicans.   As Cillizza concludes, it’s “overblown” to say that the Republican party is made up of White Protestants and the Democratic of minorities and atheists, but there is definitely an argument to be made that each party is disproportionately so.

This first pie chart shows the racial and religious affiliation of people who identify with or lean towards the Republican party.  More than half are White Protestants, another 18% are White Catholics.  Only a small percentage of party faithfuls are religious Blacks and Hispanics (the two racial groups featured in in these data). 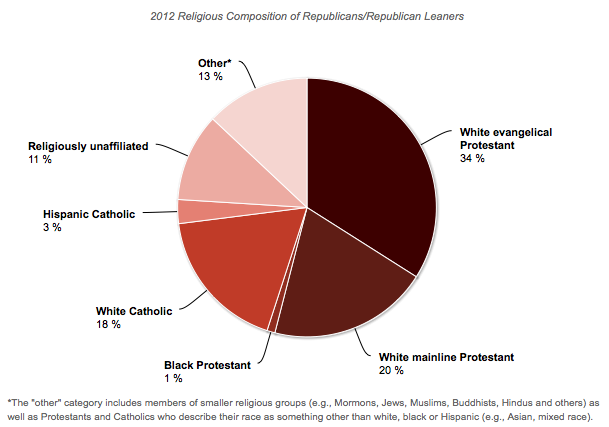 This second chart shows the same data for Democrats and Democratic-leaning individuals.  Almost a quarter of Democrats are White Protestants, but a slightly larger percentage of Democrats are religiously unaffiliated.  One in five Democrats identifies as either Black or Hispanic and religious.  The larger “other” category conceals smaller blocs that nonetheless add diversity to the party. 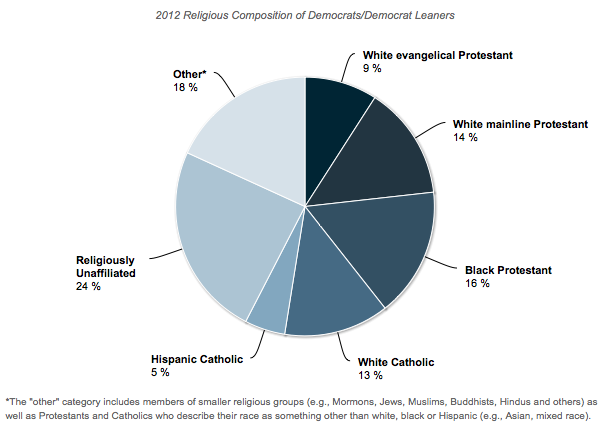 This is just one way to slice the pie, so to speak, but these are the kinds of data that both the Obama and the Romney campaigns are working with.  When they aim to bring out their “base,” this is what they’re talking about.  These numbers may give us a clue as to why they pick the strategies they do, such as the sudden spike in the inclusion of the word “God” in the Republican party platform.

It would be helpful to compare this interesting data with a similar breakdown for the total population of the US. Does anyone know the statistics?

for the Republican chart, you said religious Blacks and Hispanics make up the two racial groups in the chart, but I think there's a third one: whites.

Interesting, Hispanic is not a racial group, but an ethnic group. And as usual, you can make statistic say anything you want.....how about doing a pro life chart and a "pro choice" chart? Bunch of bilge!

RELIGION AND RACE AMONG DEMOCRATS AND REPUBLICANS « Welcome to the Doctor's Office — September 18, 2012

I was glad to see the post on the intersections of religion and race and disappointed that they didn't include their own results from their Asian American Survey they reported in July. I think if we add in the Asian American religious diversity in the mix we'd see that the Democrats are quite religiously diverse due to the much stronger presence of Asian Americans there.

Sarah Palin on a mission to keep Jesus at the heart of Christmas - Page 3 - Christian Forums — November 24, 2013

[…] This reac­tion against prayer should not be a sur­prise. I would remind you that the rea­son why I left the party myself was their hos­til­ity to reli­gion and the largest sin­gle group in the demo­c­rat party based on reli­gion is “no reli­gious affil­i­a­tion” […]