Reducing Poverty: Where There’s a Will…

Jared Bernstein has this chart showing pre-transfer and post-transfer rates for the OECD countries (click to enlarge): 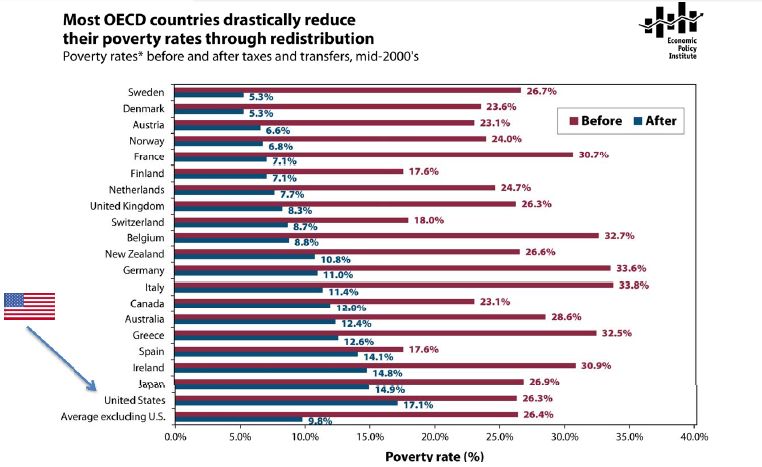 1.  Governments have the power to reduce poverty, and reduce it a lot.  European governments do far more towards this goal than does the US government.

2.  It’s unlikely that America’s poor people are twice as lazy or unskilled or dissolute as their European counterparts.  Individual factors may explain differences between individuals, but these explanations have little relevance for the problem of overall poverty.  The focus on individual qualities also has little use as a basis for policy.  European countries have fewer people living in poverty, but not because those countries exhort the poor to lead more virtuous lives and punish them for their improvident ways.  European countries have lower poverty rates because the governments provide money and services to those who need them.

3.  The amount of welfare governments provide does not appear to have a dampening effect on the overall economy.

"The amount of welfare governments provide does not appear to have a dampening effect on the overall economy."

I am flabbergasted that someone would make this statement with regard to plenty of the European countries in the chart.  Does the unsustainability of some of these countries' welfare systems - especially in light of the fact that such systems in certain countries have already unraveled for crying out loud, at a horrible cost for the poor - account for absolutely nothing?!

First Question: Where is your proof that this is not dampening the growth of the economy? The average per capita GDP of the EU is roughly 1/3rd lower than the US, and their growth rate is not as high as it should be given that disparity.

Second Question: "Poverty" is defined as 50% of median income. Is this really a useful definition to compare between countries? To pull some numbers from oecdbetterlifeindex.org, that puts the US poverty threshold at something like $18,854/year, but the German threshold at $13,846.  I don't know if those numbers specifically are purchasing power adjusted, but I know that the ones that are show a gap of a very similar magnitude. So this chart is measuring income equality only as a measure of poverty. Making some fairly big assumptions about how both welfare and poverty are distributed, you could estimate the US poverty numbers by the German threshold to be 19% per tax and 12% after.

In summary, chart definitely shows that governments can redistribute money to the poor, but by using only income equality as its measurement of poverty, it fails to show an important piece of the picture of what "poverty" means. Poor people in the US don't work less hard than their German components - they just have to make $5,000 more a year for this analysis to stop considering them "poor."

none of this data matters if citizens of a country don't care about its people in poverty or deny that people can work very hard and still be in poverty...

If the united states welfare system would quit giving welfare to illegals, and drug attics faster then the ones who just need help but make $2 to much, the us would not be in the state it is in. The united states welfare has told many to "oh go have another kid and we will give you everything, Go get hooked on drugs and you will get everything, If you were divorced you could get more."  Now these are not hear say statements. These are factual statements. I have the references to back them up. And the us wonders why our welfare system is so bad. If you work real hard, and are just a few dollars short you can't get help. Because why, you make to much. But they advertise if you are illegal you can come get help with everything. How is this helping our economy? How is this helping anything? Quit helping the illegals, quit enabling the druggies by paying for everything for them, Make them take a pee test before they get cash or food assistance. Do not encourage more pregnancies to get more money. And do not encourage family brake ups because they don't need help these days anyways.

I was walking down the street and a rather shabby looking fellow asked me for some change.  Much to his delight, I assured him that I would do everything in my power to make sure he was no longer living in poverty.I asked him how much money he made panhandling, and he said it was "a couple of bucks a day. Around $20".  I then informed him that the true definition of poverty is around $1 a day, and that my work was done.

Solving poverty, one case at a time :)

I would like to know why my comments were deleted.

I'm a little curious as to whether or not data exists that would show whether redistribution enables people to pull themselves out of poverty, or whether it merely enables them to survive at poverty level indefinitely.

I would think perhaps a number compares lifetime payout to recipients, or how long the average recipient needs assistance, or perhaps even how much of the redistributed funds are used for basic necessities (food, housing, medical) and how much is dedicated to education and training.