The Power Elite: Connections Between Business and Politics in the U.S.

In 1956 sociologist C. Wright Mills published a book titled The Power Elite.  In it, he argued that our democracy was corrupt because the same people exercised power in business, the military, and politics.  This small group, with so many important roles and connections, had an influence on our society that was far out-of-proportion with their numbers.  This, he concluded, was a dire situation.

[This] nifty visualization… shows how many, many people, through the operations of Washington’s revolving door, have held high-level positions both in the Federal government and in major corporations. To take but one example, the set of all Treasury Secretaries includes Hank Paulson and Bob Rubin, which overlaps with the set of all Goldman Sachs COOs. The overlapping is pervasive. Political scientists and the rest of us have names for such cozy arrangements — oligarchy, corporatism, fascism, “crony capitalism” — but one name that doesn’t apply is democracy.

UPDATE: I’ve included a criticism of the methodology after the diagrams; the overlap portrayed here is almost exclusively among Democratic politicians and the diagrams were explicitly intended to point out connections among progressives. 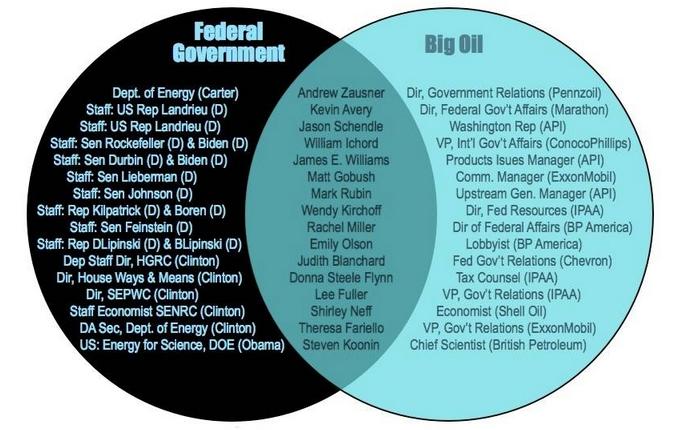 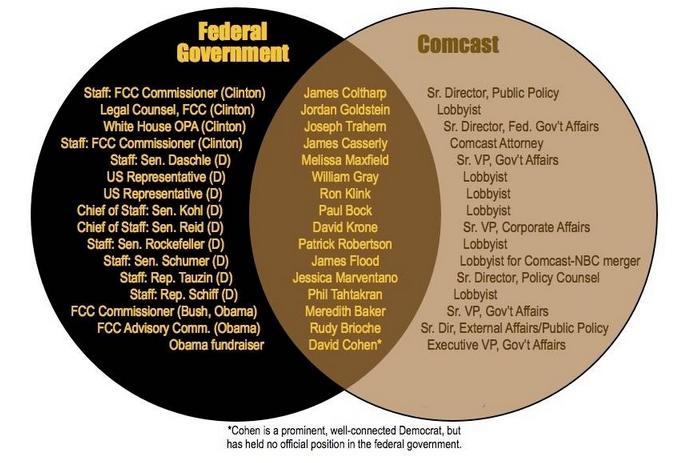 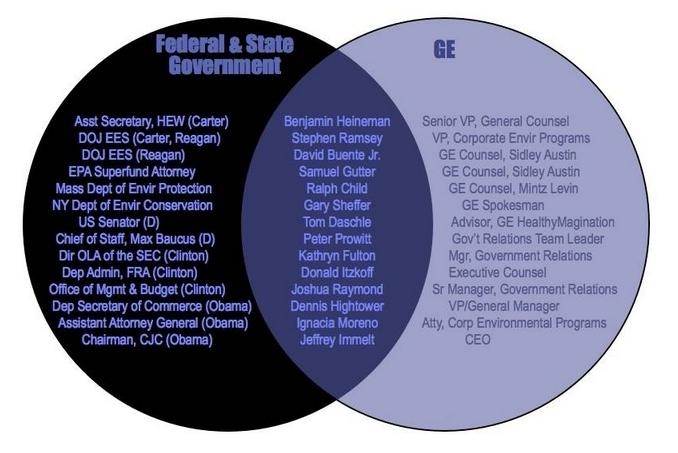 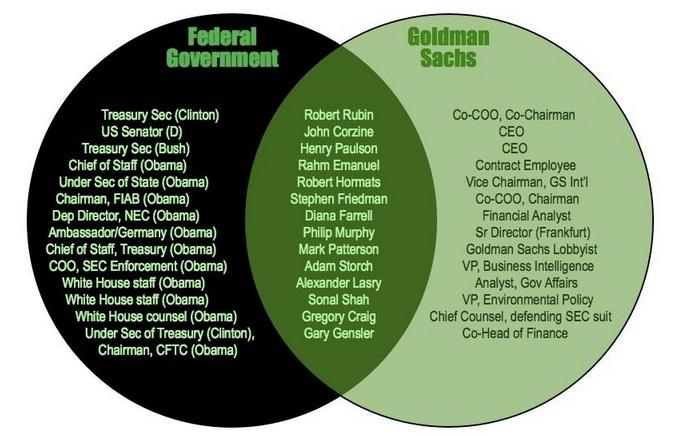 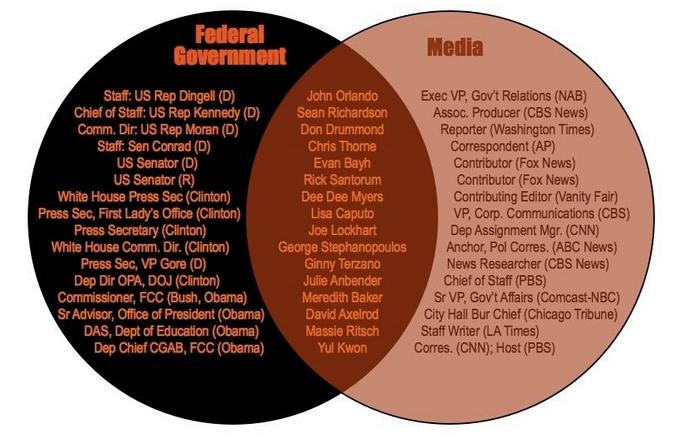 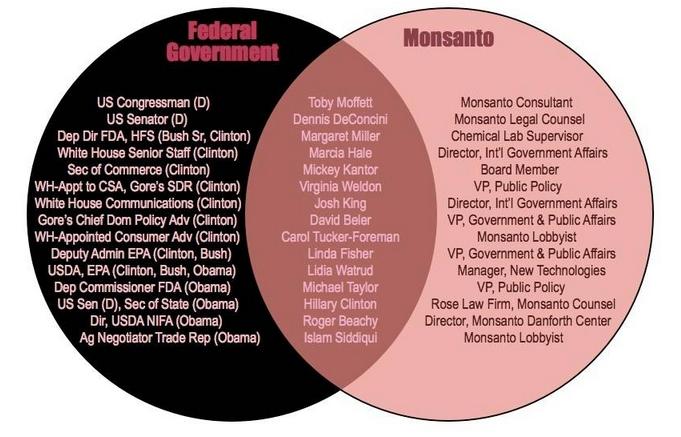 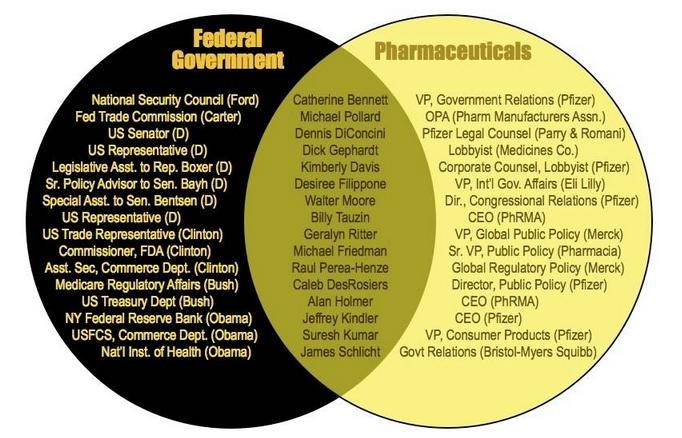 On the methods for putting together these diagrams, Strether writes about the person who’s behind the diagrams:

Herman’s honest: Her goal is to “expose progressive corporatism,” and — assuming for the sake of the argument that D[emocrat]s are progressive, and that “progressives” are progressive — her chart does exactly that, and very effectively, too.

But what her data does not do is expose corporatism as such; there are very, very few Rs listed; it strains credulity that Hank Paulson was the only high-level GS operative in the Bush administration, for example, and if GS isn’t the R[epublican]s’ favorite bank, there’s surely another.

Hence, Herman’s chart, if divorced from context[2], might lead somebody — say, a child of six — to conclude that the only corporatists in Washington DC are D[emocrat]s.

Thanks to Carolyn Taylor for pointing out the methods bias.

This is great. An amazing example of neoliberal rot at the top levels of government and industry. Further, I wish more people would recognize this as a form of market failure. It's commonly referred to as "regulatory capture" and not enough people talk about this. So, kudos.

The Federal Constitution establishes a republic, not a democracy. In fact, the Constitution explicitly guarantees that State governments will also be republics. "Democratic Republics" and "Representative Democracies" are NOT democracies. Throughout the history of the U.S. there has been an "Establishment" that has worked for stability in the country's affairs. They've been so successful at this that we've only experienced one Civil War so far.

I am sympathetic to the general idea that our government is too cosy with many big interests.

However, people do have to work SOMEWHERE before and after they work in government.  Where should government employees (legislative or executive branch) come from?  Must we hire them all straight out of college and never let them work anywhere else?

These Venn diagrams seem remarkably like cherry picking.   "Media" covers all kinds of entities, but GE and others cover only one corporation.  The GE diagram includes both federal and state government, while the others are only federal.  The diagrams all have a suspiciously similar number of names on them.

As a test, consider the following: could you construct a similar Venn diagram with 15 persons who have had positions of authority across the federal government and who also:

Again, I think there is a problem with cronyism.  I just don't think these Venn diagrams are that helpful in illustrating it.

Every US senator and Representative, or staff to them, or anyone in senior government, that has had a position of responsibility anywhere in the private sector falls onto one or more of these diagrams.

Should we recruit senior government officials from the ranks of people who have never exercised high authority, or should we recognize that the people who are most qualified are more likely to have already exercised some measure of authority.

While the information about government and big-business connections is mildly interesting, the abuse of pictures that look like Venn diagrams but aren't in this post is serious.  Are all the politically active graphic designers (on the left and the right) intent on killing the concept of Venn diagrams?

Those diagrams don't make any sense; the area are supposed to represent the number of people in each catergory...

Lisa, you do realize, don't you, that these Venn diagrams are admittedly completely biased?  If you trace back the origins via Naked Capitalism (your own link), 5 generations back at their 'roots' there is what N.C. calls an "honest" admission by their creator to only show the crony connections of progressives, not of conservatives or, even more, of Tea Partyites.  The original source of these seems to be a Ron Paul website (although after he got snubbed at the GOP convention, i wonder if he and his supporters want to continue to target only Democrats and not also Republicans?)

My first clue was seeing the glaring absence of Donald Rumsfeld in the Pharmaceutical Venn.  Good grief.  No small "omission."  Even that omission isn't pointed out yet at the Naked Capitalism site, which called itself for reader assistance in making the Venns bipartisan instead of purely partisan bias.  WHat did get pointed out was that the creator of the Venns labeled Billy Tausin a Democrat even though he'd long since switched to being a Republican, before going CEO with Big Pharma.

Lisa, I think you need to caveat your own website here, at the very least, with some acknowledgment of this bias and not leave it to Naked Capitalism to carry that reader-awareness responsibility.

As small as the US Power Elite is, despite the desire to control this World (for ever) there´s a deep split over strategies. Attempt of a deeper analysis of this split: http://wipokuli.wordpress.com/2012/12/07/us-power-elite-at-war-among-themselves/ !
Andreas Schlüter
Sociologist
Berlin, Germany

Home Insurance and Christmas Time
Whilst it can be quite a soothing time at Yuletide, some high net worth insurance providers routinely up their customers' home contents insurance by 25% at Christmas. Even so here at Dovetail Insurance, that you are secure...

“US
Power Elite Declared War on the Southern Hemisphere, East Asia and
all Non-Western Countries in September 2000”:
https://wipokuli.wordpress.com/2016/03/13/us-power-elite-declared-war-on-the-southern-hemisphere-east-asia-and-all-non-western-countries-in-september-2000/