Words: The Democratic and Republican Conventions

The New York Times ran these graphics showing the word frequencies of the Republican and Democratic conventions.  I’ve added underlining on the keywords that seem to differentiate the two conventions. (The data on the Democrats runs only through Sept. 4, but it looks like the themes announced early on will be the ones that are repeated.) 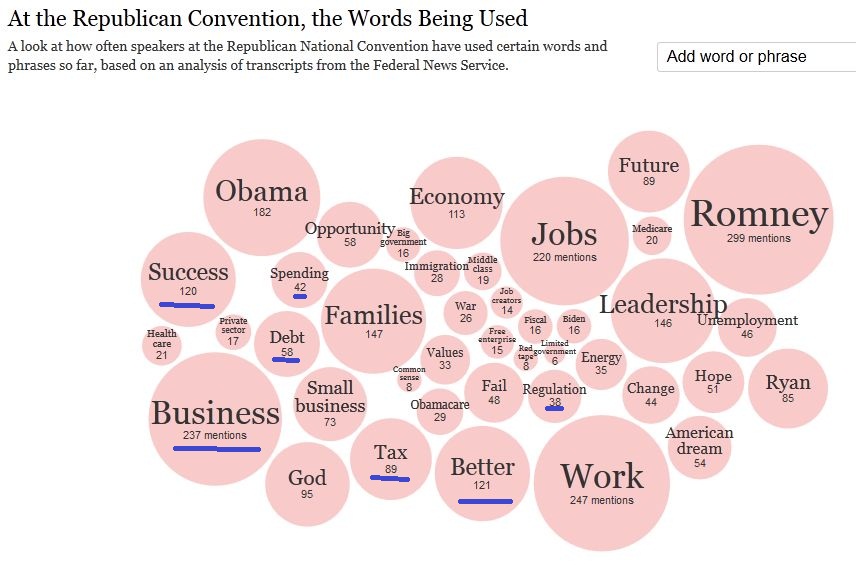 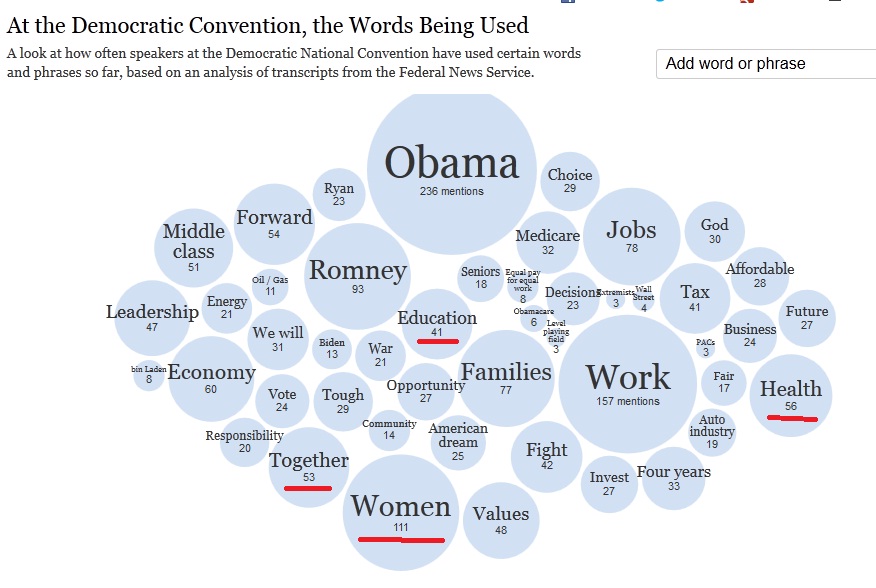 Both parties talked about leadership, the economy, jobs, and families.  More interesting are the differences.  Democrats talked a lot about Women, a word which seems to be absent from the Republican vocabulary.  The Democrats also talked about Health and Education.  I find it curious that Education does not appear in the Republican word cloud.

The Republican dictionary falls open to the page with Business – ten times as many mentions as in the Democrats’ concordance.  If you go to the interactive Times graphic, you can click on Business and see examples of the contexts for the word.  Many of these excerpts also contain the word Success.

You can put the large-bubble words in each graphic in a sentence that condenses the party’s message about government, though that word – Government – does not appear in either graphic.   For the Republicans, government should lower Taxes so that Business can Succeed, creating Jobs.

For the Democrats, government should protect the rights of Women and ensure that everyone has access to Health and Education.

Perhaps the most telling most interesting word in the Democratic cloud is Together.  The Republican story is one of individual success in business, summed up in their repeated phrase, “I built that.”  The Democrats apparently are emphasizing what people can accomplish together.  These different visions are not new.  They go back at least to the nineteenth century.  (Six years ago, I blogged here about these visions as NFL brands — Cowboys and Steelers — and their parallels in US politics.)

(HT: Neal Caren who has posted his own data about the different balance of emotional expression at the two conventions.)

Make sure to check out their updated tool for comparing how frequently words were used at the two conventions:
http://www.nytimes.com/interactive/2012/09/06/us/politics/convention-word-counts.html

I find it interesting how much the dems say "middle class". The republicans mentioned both poor and middle class rarely but about about equally (12, 19) but the dems mentioned poor way less than middle class (15 vs 179!).

Bill Clinton seems to be the highest user of poor, BTW. Kudos to him.

I would like to see these reported as percentages....in cases of such comparisons, raw numbers are less revealing that percent of total....