As I speculated years ago (here and here), it may be hard for Americans to imagine a world where the law guarantees them at least 20 paid vacation days per year.  But such a world exists.  It’s called Europe.* 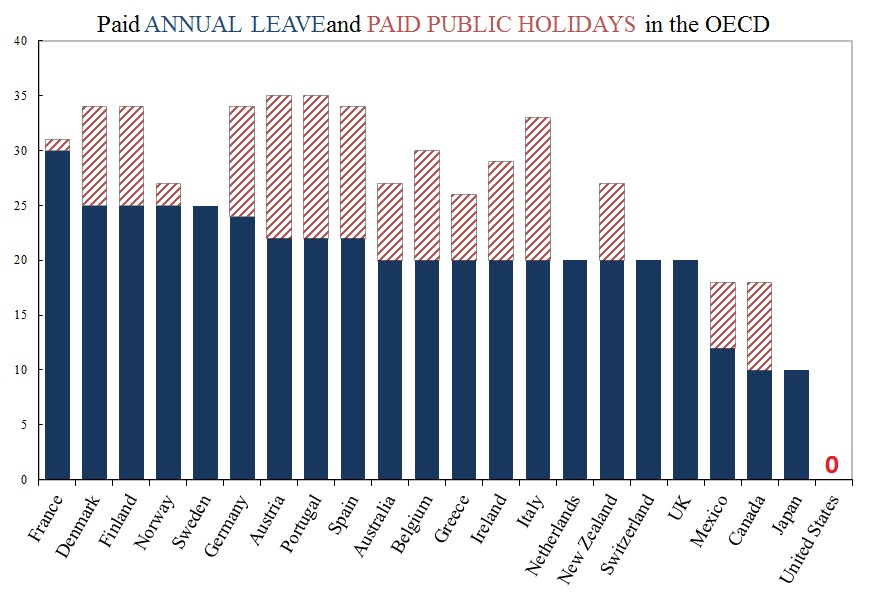 Americans are the lucky ones.  As Mitt Romney has warned us “European-style benefits” would   “poison the very spirit of America.”  Niall Ferguson, who weighs in frequently on history and economics, contrasts America’s “Protestant work ethic” with what you find in Europe – an “atheist sloth ethic.”

The graph is a bit misleading. It shows only what the law requires of employers.  Americans do get vacations.  But here in America, how much vacation you get, or whether you get any at all, and whether it’s paid – that all depends on what you can negotiate with your employer.

Since American vacations depend on what the boss will grant, some people get more paid vacation, some get less, and some get none.  So it might be useful to ask which sectors of our economy are beehives of the work ethic and which are sloughs of sloth.  (Ferguson’s employer, for example, Harvard University, probably gives him three months off in the summer, plus a week or two or more in the winter between semesters, plus spring break, and maybe a few other days.  I wonder how he would react if Harvard did away with these sloth-inducing policies.)

The Wall Street Journal recently (here) published a graph of BLS data on access to paid vacations; they break it up by industry near the bottom. 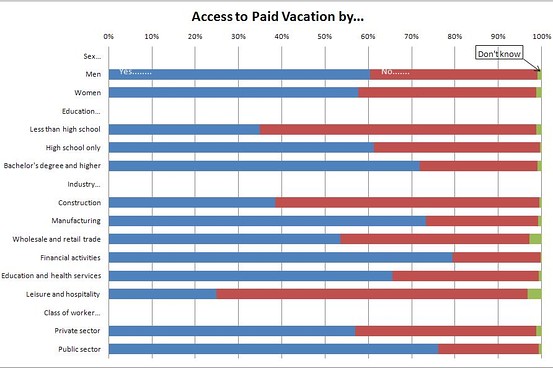 Those people who are cleaning your hotel room and serving your meals while you’re on vacation — only about one in four can get any paid vacation days.  And at the other end, which economic sector is most indulgent of sloth among its workforce?  Wall Street.  Four out of five there get paid vacation.

How much paid vacation do we get?  That depends on sector, but it also depends on length of service.  As the Journal says,

Europeans also get more time off: usually a bare minimum of four weeks off a year. Most Americans have to stay in a job for 20 years to get that much, according to BLS data.

* The graph is from five years ago, but I doubt things have changed much. The US still has no federal or state laws requiring any paid vacation days.

"Europeans also get more time off: usually a bare minimum of four weeks off a year. Most Americans have to stay in a job for 20 years to get that much, according to BLS data."

And then there's the quality of the time off. I know someone who works for the largest online retailer and he has earned 4 weeks a year after 5 years but he would be out the door if he tried to take even two weeks off together. And often does "working" vacations, of course.

There is a very strong argument that the cultural norm of increased vacation time (and the resulting legislation) in Europe is a result of higher taxation. Why negotiate for wage increases if you only get to keep half of every dollar? You get to keep 100% of every extra day off you get. Similar to the effect of the tax break for health insurances, this strongly incentives compensation away from cash and toward other benefits.

Studying for my master's degree in Denmark. My yearly income is around 18.000 USD, part is publicly funded compensation for taking an education, part is wage from working 15 hours a week. Oh yeah, my education is paid for as well and I have 6 weeks paid vacation as a student assistant.
It's truly fascinating, and kinda depressive, that Americans have no guaranteed vacation.

As a sociologically interesting sidenote, the Danish laws are a bare minimum. Usually benefits such as paid vacation are negotiated between employers associations and trade unions. So usually you will have more paid vacation than the bare minimum.
There is, as opposed to many countries, no legal minimum wage in Denmark. However, because of the way the labor market work, a low wage job will never pay less than approximately 4000 USD.
....so actually the government, and the nanny-state, does not interfer that much with the labor market.

The difference is that if you speak of welfare state, public services and common goods in the United States you will be probably accused by many people of being a bloody Stalinist who dreams of imposing a communist regime.
In Europe we just have a different concept of State. That's why the fact of paying taxes is not a big problem, because we know that in return we get some services that we would have paid a lot more if they were private.

[...] the whole article, which is short (I promise) and talks about paid vacation in the US, look here. Share this:TwitterFacebookLike this:LikeBe the first to like this. This entry was posted in [...]

Without saying too much, I work for a large shipping company with mostly unionized labor. We get a lot of great benefits despite many of the workers being part timers, including paid vacations.

After the first year you get two weeks off and the max amount of paid time off is 5 weeks. The only thing stopping you from taking consecutive weeks off is someone with more seniority in your work area asking for that same week.

They also allow you to take at least one day off paid if you ask for it at least two weeks in advance. Provided you give notice and don't abuse it, you can ask for this as much as you want, but they won't pay you after that first time (resets with the year though).

I know for certain that if my job wasn't union, I wouldn't have healthcare/vision/dental, decent raises, 401k, tuition reimbersement, vacation time. That's why I am very proudly union and hate that conservatives in America are trying to get rid of unions on the basis they aren't needed. At the exact same time these same conservatives are trying to roll back little things like child labor laws, minimum wage, the Affordable Care Act, public unions, social security and medicare among other important protections and services.

I even read a year or two ago about one state, either RI or NH, trying to repeal a law that concerned whether or not their citizens would get a lunch break. We need unions, if only because at the moment government is broken.

Australia also gets a minimum of 4 weeks (plus about 5-6 public holidays) - I think the fact that EVERYONE is entitled to the leave means there's less social stigma around taking it. Sure, some workplaces can be difficult about allowing the time, but in general, it is accepted and normal to take time off - usually in at least a week at a time blocks. Indeed, we even have government-funded advertisments reminding people to take their leave, and suggesting they use it to explore more of Australia & spend their tourist dollars domestically!
People NOT taking leave here is seen as a potential financial issue (for the employer, as the time rolls over and becomes a big payroll liability, which has to be paid out when the person resigns), and also as a mental health issue - if you're not taking regular leave, its assumed you're likely to be overworked/stressed. Its also often spoken of in terms of a person being less likely to be able to cope when things get difficult.

I think your point is very good, but I also think your discussion of Ferguson's situation as a Harvard professor is a bit unfair (and I'm surprised that an academic would put it in quite the way you did). It's true that universities don't officially require a professor to work during the summer and during breaks, but academics still have to do research and publish. I just got my PhD, and my advisor was talking with me over the phone and e-mailing me (and other members of our lab) throughout her most recent week-long family vacation. I think that there would be pretty severe consequences to her career if she didn't. I haven't taken a vacation in months, and I haven't taken a non-working vacation in years. I don't expect that to change for me if I stay in academia.

I have no doubt that Ferguson, as a Harvard professor, has tons of privilege (I also have that privilege as a recent PhD, and so does my advisor). The opportunity to take time when he wants to is part of that privilege, but I think it's unrealistic to think that he's actually taking all that time off.

Using vacations to talk about class consciousness « Memoirs of a SLACer — September 9, 2012

[...] at vacation length in the US and Europe through the lens of class consciousness. Additionally, these graphs from Sociological Images can be used to provide students with more data. Share [...]

If the answer is simply "strong unions" then there must be a reason that people who have union backing value time off over getting paid more.