Sociological Images owes a great debt to Jean Kilbourne, a pioneer in the feminist critique of advertising.  She’s most famous, probably, for her video series, Killing Us Softly.

In those videos, she offers a typology of ways that women are subordinated in media content.  One of those is silencing.  Sometimes this means actually covering a woman’s mouth (forcibly, but also playfully), other times copy simply says that she need not (or shouldn’t) speak.  Below are a series of images we’ve collected that illustrate this.  Some of them are dated, but they give you an idea of what the mechanism of silencing looks like.

Canada’s Next Top Model (Cycle 3), sent along by Julie C., included a photoshoot in which the models’ mouths were covered with duct tape.

Erin S. sent in a link to a set of fashion photos in New York Magazine that show faceless women.

Reanimated Horse sent us an American Apparel ad in which the woman’s body is highlighted but her face is obscured:

The next two ads are examples of one’s that suggest that women need not speak, that products can speak for them. 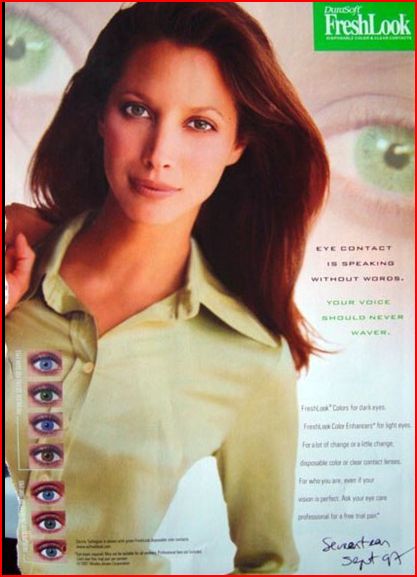 “Make a statement without saying a word”: 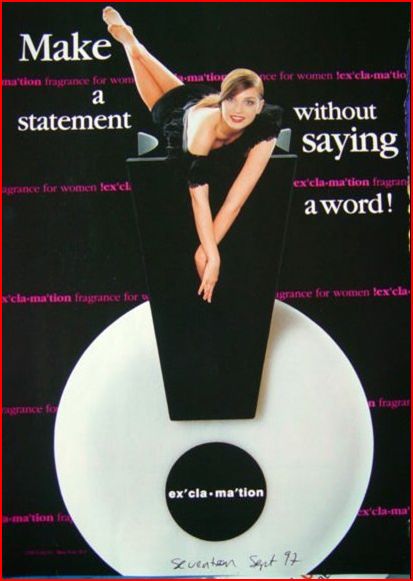 Finally, Sarah B. sent along a form of resistance to these kinds of images.  Colin von Heuring, who just started a brand new blog on media subversion, saw an ad with the copy  “You don’t need words to make a statement.”  He decided to “ma[k]e it explicit” (original on the left, modified on the right): 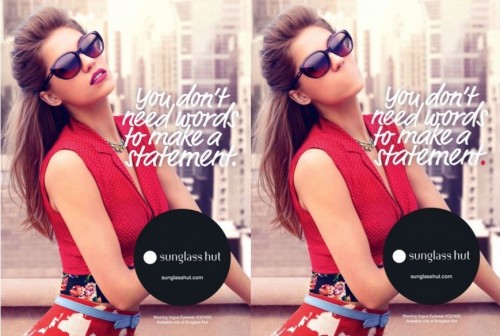 For more on Jean Kilbourne and the subordination of women in advertising, here’s the trailer to Killing Us Softly 4:

While I agree with everything she says in the video, I feel I should point out that one of the photos she uses (at 3.39) to illustrate a "skinny" model, is in fact photoshopped to make the model look thinner than she is. A little annoying, since she rails against the use of photoshop earlier in the vid. The pic and original can be seen here: http://www.snopes.com/photos/people/models.asp

No doubt there are issues here.

But I would like to say that maybe it's not all about subordination?

Is it nature or nurture that one of the best part of being in love is the ability to simply stare into each others eyes without talking and know exactly what the other is thinking?

Is it not known that we tend to dress and look our "Best" in order to make statements -- especially from across the room where we simply can't speak?

I've also heard people complain about ads that show beautiful people in clothes, rather than showing just the clothes -- perhaps the body/face covered models are somehow discussing or dealing with that complaint?

As much as media has very strong negative effects, and as much as I have no doubt some people do use these on purpose, I do not think a blanket statement is accurate.

Lastly, the phrase "You don't need words to make a statement" is used a couple times above in essence, yet the first series of photos (And all photos actually) do exactly that, make a statement without words, and there is absolutely nothing wrong about it.

I looked up the word "Beauty" on Google images (filter off). I came across a sea of sameness.

I didn't watch the videos so maybe this is included, but I was not amused by the back of an A1 Steak Sauce bottle that had a man and woman sitting next to each other, with him holding his index finger up towards her face while he ate with the other hand, with the tagline of something like "Now is not the time for talking." The point was that steak and steak sauce are more important than conversation, at least for this guy, and what I got out of it was nothing a woman had to say could matter until he was done.

I can't find a picture online. Yet.

EDITED:
And then I did. Bil Browning took a picture of it in 2009 that he posts here: http://www.bilerico.com/2009/01/a1_steak_sauce_sexism_is_that_important.php

So it's old, but it was the first time I saw it.

If anyone truly thinks wordplay on eye contact in ads for contact lenses, sunglasses, and a perfume whose bottle is a punctuation mark subordinates women, I really have to wonder how they ever survived any course on literary concepts.  I wonder if they've ever read a single poem in their entire life.

The problem with Kilbourne is that she is of the "throw in everything but the kitchen sink in order to prove my point" variety.  She so lacks nuance in her arguments that at times, she's like a parody of feminist reasoning.

Also, the authors should provide some semblance of a date for these images, seeing as there is no suggestion in the post that this is a timeline or a historical overview of some sort.  The images are misleadingly presented as if they are all current.  The contact lense and perfume ads are from my Seventeen magazines of around the mid 90's.  Maybe it's because the last time Kilbourne and the authors actually ventured to look inside a magazine was over a decade ago, but fear not, you will find plenty of evil, oppressive metaphors on eye contact for mascara ads in magazines nowadays.

The ad stating "Make a statement without saying a word!" should've gone
ahead and used some words because it looks to me like the intended
statement was either "I'm falling over a table!" or "I'm diving into a
giant toilet!"

But since the examples are mostly a bit dated, I guess images of implied
silencing are relatively uncommon compared to how often it happens in
actuality as a matter of course. It's analogous to the small,
seemingly-insignificant tip that hints at the humongous iceberg hidden
just beneath the surface. Or something like that.

All of these photos give me very different reactions.  The first 2 sets, to me, don't really fit with the analysis.  Perhaps it's because I know so many feminist photographers as well as having worked with, and know others who've worked with, the gay community, the AIDS epidemic, etc. via fashion and photography, but this is a very common tactic to make a statement on the treatment of various marginalized groups.  Cover their mouth, face, or other features in a most extreme way of saying "this is how women/gay people/AIDS patients/victims of domestic violence/etc. feel on a daily basis because they are afraid or unable to speak about their lives."  Now, I don't know that ANTM or New York Magazine were doing this intentionally, or just saw other shoots using that trope and thought it was edgy and neat-o, but IME, that's often the point.  Most photo collections I've seen of people with covered mouths or faces, stitched-up mouths, or absent mouths or faces were actively making a commentary on the treatment of those groups, often women, by pushing it to the extremes that conventional modeling in magazines and advertisements won't do unless there's a blatant reason the customer immediately understands (ex; "the woman is covering her mouth because she doesn't use Crest toothpaste, and therefore her teeth are yellow" or something along those lines).

The American Apparel ad, spot on.  Not much needs to be said about that at all.  AA makes no attempt to hide the fact that it treats it's models, and it's CEO sees women, as sexual objects, first and last.  Ladies = boobies, vaginas, and flat tummies encased in barely there outfits that have no practical use outside of titillation.

The final 3 pictures are worth a lot more thought, though.  Maybe it's because I've been reading magazines today, but they seem like they'd be right at home in an issue of cosmo.  First, it should be pointed out that all of these ads are first talking about fashion statements.  While some men, I'm sure, care about a woman's designer sunglasses, I doubt that's any majority of them, and I don't think many women over about age 12 actually believe their male love interests are preoccupied with where their sunglasses came from, what perfume they use, and in many cases, what color their eyes are at all.  It's less of a "this will make you sexually appealing to men," but "this will make you cool in the eyes of other women and society at large."  On the other hand, the magazines these are in often are filled with articles like "fifteen thousand ways to say I love you using only your eyes," and then followed by contradicting information like "we asked three guys on the street, and 66% of men says it's scary when you look at them but don't talk at all."  The fact is, what men think is portrayed as Very Important, but what men want is never specified.  There is never an article that says "things all men like 100% of the time."  Men like it when you don't say anything, but also say ALL THE THINGS!  Now that you're confused, our sponsors will tell you to be mysterious and quiet by buying sunglasses, and outspoken and wild by buying tampons!

[...] tip to Sociological Images, a fantastic blog. From the same blog, here are a couple of the things that ads tell us about [...]

I don't interpret the contact lens ad as saying that women should be silenced; I read it as saying that eye contact is an additional means of communication, not that it should be the only way for women to communicate. The photo shows a confident-looking woman who looks dressed for a business/office environment and looks as if she could be about to speak. And the next part of the slogan is "your voice should never waver."

That is totally different from the other images showing women beheaded or with mouths taped up.

[...] A nice primer on Jean Kilbourne, who has kept me intrigued with how advertising communicates to women for years, at Sociological Images. [...]