The September issue of Oprah’s magazine, sent in by YetAnotherGirl, features the woman herself on the cover wearing her hair in a “natural” (that is, real and non-straightened).  The O website announces that this is the first time in its 12-year history that Oprah has appeared on the cover without “blow-drying or straightening” her hair. 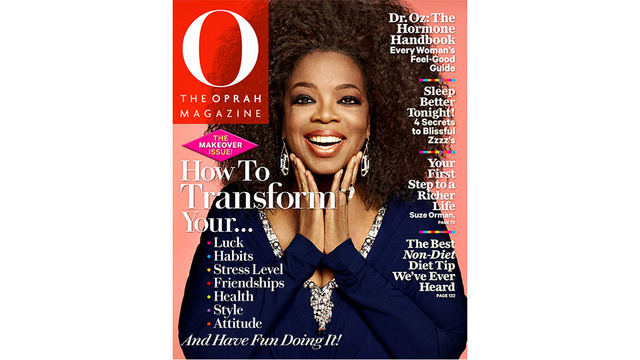 Black women’s hair is a touchy issue wrapped up deeply in racial power struggles.  The appearance of White people — in this case, the hair White people are more likely to have (that is, straight or slightly wavy) — is often considered the most beautiful or normal.  Black women who have tightly curled hair are faced with deciding to push back against white supremacy and wear their hair more-0r-less naturally (and face being seen as a “political” or “non-assimilating” Black person) or straighten their hair (and risk being accused of capitulating to racism).  Whatever they do, it’s sends a message.

What I think is notable here is that Oprah, of all people in the world, has never until now appeared on the cover of her own magazine with “natural” hair.   Lest we’ve forgotten who Oprah is, here’s a reminder (from wikipedia):

What I mean to say is, when even Oprah largely avoids being seen as she really is, we know we are seeing a powerful cultural force.  In this case, a racist and sexist one demanding that women of all races conform to an unreasonable White standard of beauty.  I’m glad that Oprah decided to appear this way for the cover, but I’m saddened by why it took this long.

I had no idea racism in the USA was so ingrained that even hairstyles were perceived as race-related messages (as well as the gender-identity-related messages which seem to be more widespread.) :( Can't people just wear their hair however they like it/can be bothered to style it?

Some very interesting comments here. As much as I agree with what you've said, I also wonder if sometimes we overthink these things. I don't know if Oprah's ever publicly stated why she wears (or doesn't wear) her hair a certain way, but maybe she just likes playing with her hair. Or maybe she naturally likes the look of straight hair, the same way somebody might prefer the color blue over yellow. Can we be sure it's always a cultural thing? Just a thought . . .

Well she's still got makeup on...

I'm wondering what the odds are that that's really her "natural hair" and not a wig/weave.

In my opinion, Black females & males wearing hair their straightened reflects the very old & deeply high value placed in White cultures for certain textures of silky straight hair or, less often & less valued- lightly curled hair. I believe that initially the main reason why Black females & Black males went through a process by which their naturally tightly curled hair became straightened for as long as that "process" work probably was because doing so was a way to model White people's hair textures & hair styles. Modeling White people's hair texture & hair styles was a critical part of demonstrating that Black people could look, think, and act acceptable (to White people).

I think that some Black females-like some women of other races/ethnicities-enjoy wearing their hair in  different ways because doiing so is a form of creative expression, and helps them evoke different personas. Given the easy availablity of wigs and hair pieces, Black women such as Oprah Winfrey-like women of other races/ethnicities-can wear their hair different ways throughout one day or one week.

Furthermore, Oprah wearing that big afro wig in that photograph on the cover of her magazine reflects a change in African American aesthetics since 2010 or so. Big (wide) afros are actually a return to one type of natural hairstyle that was quite popular among some African American in the 1970s. But unlike the 1970s those big afros ("naturals") might be chemically texturized and/or dyed red or brown or blond.  In the 1970s, it would have been anathema for afro-centric Black people to chemically treat or color dye their naturals. Whether its size is very short or very wide or in between, the return of the big afro may be a way of saying that "Black is beatiful", but I think it's also a way of saying that when it comes to hair texture & hair styles, it's all good.

For those who may be interested, here's a link to a related post on my blog http://pancocojams.blogspot.com/2011/10/changing-shape-of-afro-hair-styles.html  The Changing Shape Of Women's Afro Hair Styles

An ode to the Gabby Douglas hair drama?

I'm about to turn 24, and aside from straightening my hair with an iron for a day or two (and the one month in eighth grade and two months in 12th when I had braids), I wore my hair naturally until eight months ago, when I got a keratin treatment, just because I wanted to shake things up and it was something other than dye. And while I think it's great that Oprah is finally using her platform to do something that could conceivably say something positive about self image to black girls (though frankly young girls are not so into Oprah these days, I think, and there are other people who have done things for them, like the "I love my hair" video on an episode of "Sesame Street"), I do think it's important to note that even though her hair is "natural" on this cover, it's not like she rolled out of bed that way. There is still a difference between totally natural hair, natural hair that has basic styling (i.e. shampoo, conditioner, and some serum or something), and Oprah's hair on this cover, which clearly has plenty of product and time put into it. For regular ol' folks, whether we wear our hair natural or relaxed, we have to put a lot of time and money into making it appear presentable, whether that's to play into racism or make a big statement about going au naturale, or anything in between.

Sweetie, you're just way to bitter to have a rational conversation with. What you're saying may be true (and I wouldn't know because I don't live in Nigeria), but I still stand by the idea that everybody has the right to like what they like, and we can't start making assumptions about what's behind others' actions.

It's unfair of you to compare general trends to the actions of one individual. If one person decides she likes blue more than yellow (or changes her hairstyle), it's not a big deal. If 80,000,000+ people decide they no longer like blue and decide to like yellow instead (or decide to "naturally like light skinned women with unusually pointed noses and long straight hair") that IS something noteworthy instead of just random chance.

Just something from the other side:

My roommate in college, a very good friend, was white, but she had very curly hair.  I, who have straight hair, would watch as she spent an hour a day straightening the top of her hair and her bangs, putting so much goop in it that the fumes would make me ill, and it still wouldn't lie straight.  If she left it alone, it turned into a bird's nest.

One day, for fun, I braided her hair into 50 tiny braids, and it looked good, and was manageable - but she said she didn't want to do that any more because she felt like she would be "stealing" from black culture.  That wearing her hair in a "black" style would be embarrassing.  This completely shocked me.  Not because I think it was a racist statement, but that she felt she couldn't take a good idea to deal with her bird's nest.

Nearly all people, male, female, of any race, do not wear their "natural" hair. Most have it cut, they shampoo it, highlight it, curl it, put it in bows, etc. Oprahs style is no more natural then anyone else's. Perhaps her hair is socially significant or whatever, but really, it's just as unnatural as the rest.

What percent of women--of any race--  on the cover any magazine are wearing their hair untouched by a stylist's hand? I'll be the answer is in the single digits.

Actually, Black women who straighten our hair are more at risk of our hair becoming weak, damaged, and falling out.