Variation in the Generosity of the Rich

Yesterday NPR discussed the results of a new study on charitable giving by the Chronicle of Philanthropy.  The study affirmed that lower income people give a larger percentage of their income to charity, but also discovered that how much wealthy people give is strongly correlated with the type of neighborhood they live in.

It turns out that wealthy people who live mostly with other wealthy people give the least amount of money to charity, on average.  Here are five zip codes with high-densities of rich people according to the IRS (= % of “wealthy filers”) and the percent of their incomes that they donated to charity (= “percent given”): 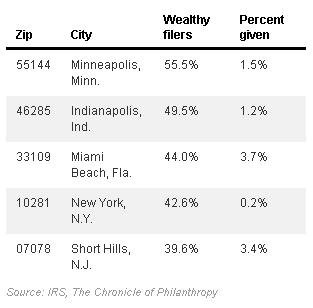 In contrast, here are five zip codes with a great deal of economic diversity.  In this case, the far right column shows a dramatic increase in the percent of their incomes that they donate to charity: 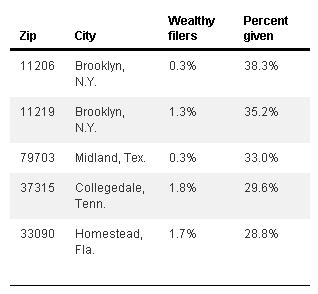 Wow, so rich people in Manhattan donate less than 1% of their income to charity, whereas the rich in Brooklyn give 35%.  That’s a pretty amazing divergence!

There are (at least) three explanations for this finding.   One is that living in a diverse neighborhood makes you more inclined to give, whatever your inclination before moving there.  Another is it that generous rich people move to diverse neighborhoods and stingy rich people isolate themselves.   A third is that some other variable (e.g., political affiliation, religiosity) is correlated with both neighborhood preference and generosity.

A social psychologist interviewed by, Paul Piff, suggests that it’s the first explanation.  Rich people tend to be isolated, he says, so they just don’t notice that other people need help. But, if they see need, they do show compassion.

I’m sure Piff knows his stuff, but if I had the opportunity to follow up with him on this argument, I’d ask him more about what he means by “see.”  It seems to me that anyone that reads the news these days will be exposed to plenty of evidence of economic need and, if you care enough to dig for it a little bit, you’ll find stunning data documenting income inequality and heart-rending stories of widespread suffering.  It may be easy to be isolated, but I imagine one would have to at least occasionally turn a blind eye to these things.

But perhaps knowledge about need isn’t sufficient; perhaps we only “see” need when we come into direct contact with human beings, the ones with who become familiar to us. There is evidence that we find it easy to blame strangers for their misfortune, but chock it up to bad luck when it’s us, our friends, or our families.  So perhaps raising consciousness about poverty isn’t enough, perhaps we really do need to get the rich to rub elbows with the disadvantaged.

In any case, the results are pretty impressive and no doubt have some wide-ranging implications for how to make us a more compassionate and generous society.

Somewhere north of 75% of this giving is to church.  Is it really "generosity" when your church implies you'll go to hell or whatever if you don't hand over 10%?

What about cost of living?  Seems like that would strongly be correlated with giving and neighbourhood.  If you have less disposable income because you're living in an expensive place, you have less to give.  I might qualify as "wealthy," depending on how that's defined (income, probably, it's the IRS) but I assure you, it all gets dumped into the mortgage and I don't have much left over.

I'm floored by the 30% +/- figure for diverse neighborhoods. What is the denominator (earned income v all)? What is the defnition of wealthy?

10281 is in the financial district in Manhattan. That suggests #3, "other variables". (Said as a Manhattan resident who really doesn't want to believe it's all that bad.)

Those two Brooklyn zip codes are heavily Orthodox Jewish neighborhoods - would be interesting to see if there are religious or cultural concentrations in the other high-giving zips that have more to do with giving patterns than economic diversity does.

Three points that I wonder about:

1) There are some inherent limitations in this data set that need to be
remembered: "The study, based on the most recent available Internal
Revenue Service
records of Americans who itemized their deductions, examines taxpayers
who earned $50,000 or more in 2008" (Chronicle of Philanthropy). If you
did not itemize you were not included.  There seems to be an assumption
that all wealthy people who donate also itemize.  But even the
Chronicle says that's not the case.

2) "generosity" is determined by percentage of discretionary income given not absolute
value.  If I make $2 and give $1, I am more generous than someone who
makes $3 and gives $1.  I wonder if people think in
percentages like that.  If I give $1,000,000 to my alma mater or my
local animal shelter, am I thinking of its absolute value or am I
thinking that was only 2% of my earnings for last year and boy am I real Grinch.
3) Last,
when you get to the rarefied air of major gifts, are we
talking about year to year donations?  My alma mater or my local animal
shelter may be getting most of my estate at my death, but I don't
believe that that is going to show up in my 2008 tax return.  It may be
that the type of giving is different in very wealthy areas and that one
year tax returns are not picking this up. There also may be more charities requesting yearly donations in more diverse areas.  And very last, if I set up a foundation to channel my money to various organizations, does that show up on my 2008 tax return?

Dang, Midland being up there must be mud right in your left eye.  Midland is one of the Redest districts in the country.  Most lefties though assure me that those stupid, evil, vicious, stupid, inbreed, stupid, stingy, greedy, stupid, right wingers in Midland cannot be charitable.  No.  Must be a Koch Brothers tm conspiracy.

Seeing with your own two eyes is believing. Reading an abstract study is not. I recall a study from my graduate school days (decades ago). Those who read a study that said the vast majority of prison guards don't beat prisoners but who were then shown a film of prison guards beating a prisoner believed most prison guards beat prisoners. (I'm summarizing too quickly but the gist is we believe our eyes, not our analytical brains.) So, yes, if you see poverty everyday, you are much more likely to give.

I think it is also important to analyze where the giving is going and who benefits. Does it go to your favorite symphony, church or adult learning center?

Variability in the Generosity of the Rich « Welcome to the Doctor's Office — August 22, 2012

Please. Correlation does not equal Causation. This is basic logic and reasoning and something to remain aware of as you read these "studies" released everyday. Yes the chicken and the egg are correlated -- but which came first or what "caused" what?

Rich people who don't care about poor people are obviously not going to move in to house that is surrounded by poor people, either. The rich that isolate themselves are segregating themselves based on their existing proclivities.

Generally, I have nothing of use to add to these discussions, but I would like to point out that Collegedale, TN, is a highly religious community with a large population of Seventh-day Adventists, including the McKee family who started and still own Little Debbie.

Isn't this analogous to what happens on the show, "Secret Millionaire"? A super-rich person moves into a poor neighborhood and they "see" (read:experience) just how bad some people's living conditions are and just how difficult it is to live in poverty. Then they meet some people and get to know them, and pull out their checkbook.

I would like to add that this is a great argument for public transportation and planning and creating useful and vibrant public spaces. It is sometimes only in these public spaces that people from different backgrounds, races and classes get the chance to interact.