Apparently we’ve become such a sedentary/weight-obsessed society that we now have to watch our cat’s calories too.  See my kitten’s cute paws and the text in the lower right corner: 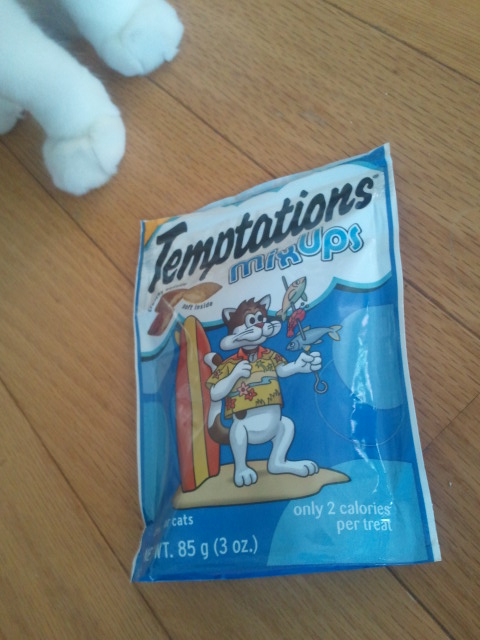 Some cats (and dogs too) really do gain too much weight when they are given too many treats and too much food. So this actually is pretty reasonable.

Yeah, this is a valid issue - my cat is overweight and the only way for him to loose weight according to the vet is to reduce his calorie intake.  Weight loss is a must, at his current weight he's at risk for diabetes.

Do they have a pink bag with a cat in a tutu for girl cats?

No offence or anything... but making the initials of your post 'KKK' might not have been the best idea.

Indoor cats are at risk for being overweight. More cats are indoor cats nowadays because we better understand the dangers, both to them and the environment, of letting them roam. This is not really new.

Indoor cats are very sedentary and need controlled diets, because they are evolutionarily programmed to eat WAY more than they will burn. This isn't because fat cats are thought of as gross or ugly, it's because modern  pet cats (kept for companionship and indoors instead of as mousers) are not able to moderate their own diets and their owners need to do so for them. A heavy cat can be absolutely miserable and in a lot of pain but won't understand that their condition is related to what they eat or how active they are.

Um, a cat's weight matters too. Many (I don't have stats on this) house cats become overweight because their owners don't feed them properly (feed them too much, too often, and food that isn't really tailored to cats' nutritional needs.) As with humans, cats are at risk serious health issues related to being overweight.

I can definitely see how putting a cat on a diet and watching caloric intake in treats, especially for cats who are cooped up indoors most of their lives, is important.

Many pets are obese. Ofcourse it's not the animals who have a weight-problem, it's the owners who have a feeding-problem.

Yeah, I'm not sure this is coming from the same place as calorie-counting "lady food" marketed at human women.  Most people find fat animals, especially cats, cute or funny, regardless of health.  Animals do not have the same body image and self-esteem issues that people do.  It's not like cats are constantly told to "put down the kibbles, fatty" or would even understand if they were, or look in the mirror bemoaning the extra pound and a half of weight after seeing thin 10 month old kittens on the covers of cat magazines.  This is a product likely aimed at people with overweight pets, or people who want to avoid their pets becoming overweight.  Even the American obsession with counting calories for people is based on more complex issues than just "fat shaming because beauty standards," and to apply the same logic to animals is silly.

Whether or not overweight, indoor, domesticated animals are unhealthy (something should be said about how their stray and wild counterparts are rarely, if ever, overweight...), I think there something to be said about the sort of food we feed our pets.

All these "treats" and most of commercial pet food are actually not healthy for animals, and I think that they are quite deleterious.

I've had several cats in my life, and those who I fed simple, low-budget, home-made food (really, don't imagine anything fancy, as I know some people who even buy fresh meat from the butcher for their pets!), lived long, happy, and healthy lives. Then dry and wet food started becoming really popular, they looked like they would have radically changed our (pet owners') lives and saved us a  whole bunch of time and hassle.
The only two cats I ever fed commercial foods died of fulminating cancer. Call me conspiratorial, but I think that says something.

Another person I know had his dog accidentally poisoned by feeding him a batch of Iam's food (which he bought at the pet's store within his Vet's clinic!!) that was apparently faulty (yet sold to the public anyways). The dog is now facing life-long problems and medications intake.

Also, have you ever seen the behavior of a cat when you open one of those treats bags? Cats LOVE them and act as if that was animal-cocaine. I am convinced of the fact that commercial pet-food is enriched with substances that make the food irresistible and as addictive, as much as most heavy human drugs.  Have you ever noticed how hard it is to change your pet diet once they get used/addicted to commercial food, if not even impossible?

I am sure that there are *some* good commercial pet-food brands out there, yet most of the "good ones" are also totally unaffordable! I know people who feed organic dry and wet food to their pets... and that cost them as much, or maybe more, as my grocery-budget. And why are some brands so immensely more expensive, while other so affordable and market appealing?

Yes, the growing cases of overweight, indoor, domesticated pets is a problem, not because fat is bad/wrong, but because we are compulsively overfeeding our pets (perhaps due to our sense of guilt and to compensate for how little time we spend with them and for having taken away their wilderness - especially when it comes to indoor pets...?).

However, it still remains that most of what we are sold to feed our pets is c.r.a.p.
Those treats might even be *only* two calories, but they are definitely not light in whichever addictive substances are in them!

God knows what they are putting in the treats that adds no calories. There is absolutely no need for cats to have low calorie food, given that humans can be in total control of their cats' food.

Cats, like humans, don't need a bunch of filler in place of real food.

To all those concerned about other people's weight: Mind your own plate.

This *is* an issue.  Cats especially (and dogs, and humans) are prone to a wide variety of health issues due to obesity.  And our pets don't have the luxury of being able to decide to go out on their own and diet, and exercise and live a healthy lifestyle.  They depend on us for their health.

Way to tempt fate Lisa, you are setting up some delicious irony for the day when you trip over your pile of empty pizza boxes and wine bottles and that cat eats your corpse.

my cat is overweight and diabetic, however, according to his vet we are not to restrict his food intake at this point.  that makes it very difficult to prevent the new cat from getting diabetes too.

why would anyone try to restrict their cat's energy intake when we all know diets don't work?

If your cat is overweight and you are concerned, this treat would appeal to you. One of my dogs is overweight and I definitely look for lower calorie treats.  So I don't think its because we're obsessed. I think instead its more because we spoil our pets with food/treat and therefore treats like this become necessary.