At the journal Epidemiology, John Cunningham published a proof-of-concept article aimed to show that Twitter is a useful and viable method of data collection.

His data captured the incidences of the words “wine,” “beer,” and “vodka” over the course of a week.  The figure shows that people are tweeting about these spirits more-or-less in unison, that they tend to do so increasingly towards the end of each day, and that wine and beer are weekday favorites, but vodka comes out ahead on the weekends, especially as the night wears on: 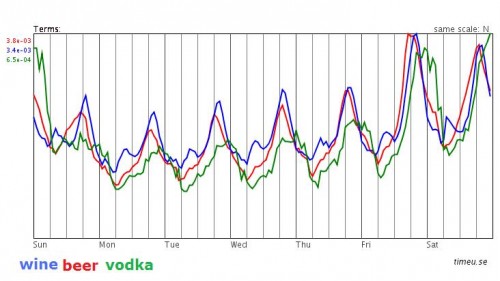 So, I thought that was kinda neat!  Now we know something about when and what people are (tweeting about) drinking and also that Twitter is good for something other than sending people messages that everyone else can see, but no one else can understand.

*Via Neuroskeptic, from whom I borrowed this great title.

The peaks in unison aren't meaningful by themselves: what's the baseline (total number of tweets) and how does that trend?

That's really interesting.  I would have thought more people would opt for vodka on weekdays, because the chance of a hangover is smaller, and vodka hangovers are less severe than ones from beer and wine.  I've also heard that the smell of vodka lingers less than beer or wine the next day.

Of course, the problem is that I assume everyone is consuming a lot of alcohol, whereas they might just be taking in a glass of wine or beer with meals.  I suppose vodka is more of a party drink.  If one's Twitter account is public, then it may be more socially acceptable and professionally savvy to tweet about beer or wine rather than vodka during a weeknight.

I was wondering how do analysts extract this information from Twitter. Any idea?

Sometimes I wonder what might you know about vodka outside Russia (the same for Ukraine, Belorussia and Poland)?

You know nothing about vodka in US. Just visit Russia, Ukraine, Belorussia, Poland. The true science has nothing in common with prejudice.

Are the tweets controlled for only users from a particular timezone? If they aren't, there are more possible explanations for the spikes.

Thanks for the link.

Just to clarify, the beer/wine/vodka image wasn't actually from the Cunningham paper. His pic had beer, wine, and cigarettes & smoking; that inspired me to do the vodka searches.

Different timezones preferring different drinks is a possibility, although I find it implausible that it could account for all the differences.