New CEOs: The Diversification of the Corner Office

Sociologists Richard Zweigenhaft and G. William Domhoff began studying ascendance to the top corporate office 20 years ago and, while the population of CEOs is far from diverse, they report that they have been surprised to see as many women and minorities as they have.  Today there are 80 white women, African Americans, Latinos, and Asian Americans at the head of Fortune 500 companies.

In a discussion about their book, The New CEOs, at The Society Pages, they ask whether the rise of non-white/non-male CEOs is really a disruption in the distribution of power.  Despite protestations to the contrary — “all CEOs, it seems, worked their way up from the bottom,” they say with tongue in cheek — almost all come from wealthy backgrounds.  The rising diversity, in other words, doesn’t include class diversity.

With one exception: African Americans.  Most African American CEOs, they show, did not grow up in wealthy families.  “Many,” they write, “grew up with parents who were factory workers, postmen, custodians, day-care workers, or house cleaners.”  They refrain from speculating as to why they see this difference.

So, what’s next?  Zweigenhaft and Domhoff make some guesses as to the near future. The people positioned to be our next Fortune 500 CEOs will have graduated from college, got an MBA or law degree, will be currently earning more than $250,000 a year, and now hold a senior executive position.  Given these parameters, they conclude that:

…about two-thirds of those a step from the CEO office were white men, about 19% were white women, slightly fewer than 3% were African Americans, about 4% were Latinos, and about 8% were Asian Americans. 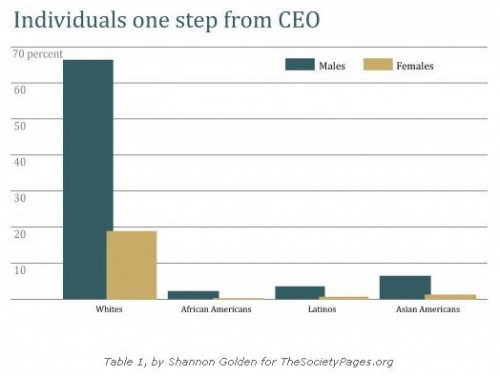 As the graph shows, compared to minority men, white women are far more likely to be rising into CEO positions in the near future.  Women of color, as they say, “almost disappear” in the data.  They explain that this likely has to do with their double minority status.  When hiring and promoting, people tend to look for ways of connecting with the potential employee.  A white man (usually doing the hiring) will see at least one thing in common with a white woman or a man of color.   As an example, they cite a study of executives with MBAs from Harvard:

…female Jewish executives all agreed that being female was more of an impediment to their careers than being a Jew, but many quickly emphasized that being Jewish, or different in any other way, was not irrelevant. As one put it, “It’s the whole package. I heard secondhand from someone as to how I would be perceived as a pushy, Jewish broad who went and got an MBA. Both elements, being Jewish and being a woman, together with having the MBA, were combined to create a stereotype I had to work against from the first day.” Another woman explained, “It’s part of the question of whether you fit the mold. Are you like me or not? If too much doesn’t fit, it impacts you negatively.”

These dynamics affect your entire career trajectory, of course, but Zweigenhaft and Domhoff believe they become even more intense as people approach the top office.  They conclude:

Culture (in the form of cultural capital), education, and class are all still in play. While gender and color remain the best predictors of who will make it into the upper echelons of the corporate world, beyond that, it’s intersectionality [of different identities together] wherever we look.

Ah yes. I must say as a white working stiff, every time the Gulfstream passes overhead, ferrying the boss who is paid a hundred times more than me, I think to myself: "It's OK. He's a white male. Brother's got my back."

[...] and other forms of knowledge will usually reflect this groups interest. I found an alarming graph that showed people who are one step to becoming CEOs of companies. It shows that white men are the [...]