Selling Cleaning and Parenting to Women Only

Sociologists use the term “stalled revolution” to describe how current state of the feminist movement.  It’s “stalled” in that, while women are (mostly) free to do what men do, men have been much more reluctant to do what women have traditionally done.  This makes sense because masculine things are generally valued and feminine things are not.

Housework is one of these things.  Married women still do twice as much housework and childcare as their husbands, on average.  If you used advertising as your metric, however, you’d think that women did 99%.  Here are three examples and a counter-example:

1.  Monica C. sent in an Olympics-themed content sponsored by Pampers.  It’s called the “Mommy Games,” as if only women parent: 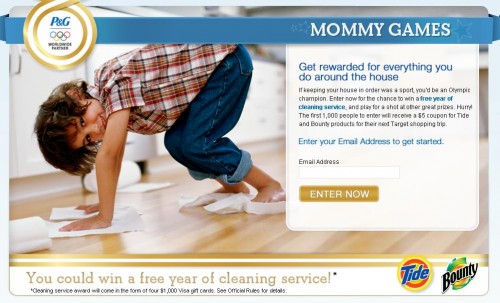 2. Appliance maker Kenmore has a children’s line, sent in by Anna C.  All of the products are in pink: 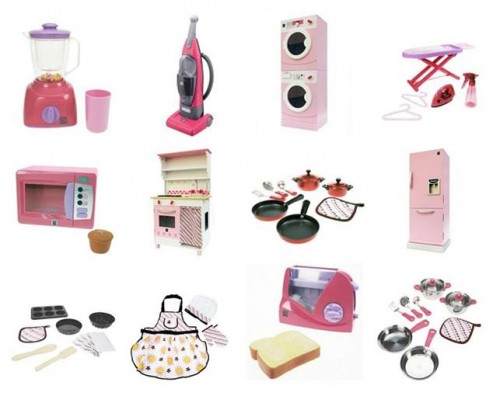 3. Allison spotted the same phenomenon at Hoover.  They are inviting “real women” to submit vacuum stories: 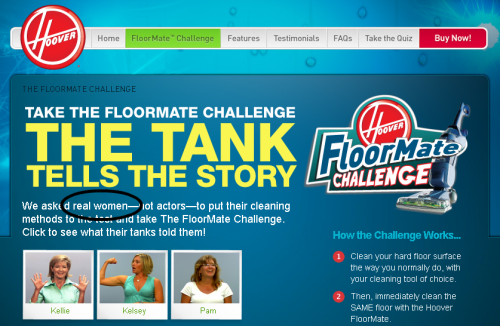 4.  As a counter-example, Kristie McC. sent in a screenshot of Eco-Me products.  The company  make a point of putting images of both men and women on their cleaning products. 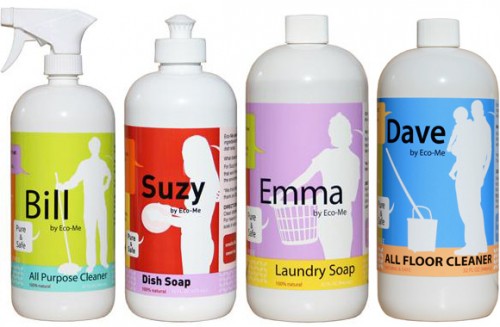 So, there are exceptions, but the overwhelming message is that parenting and childcare is something that women do.  For more, see our gendered housework/parenting page on Pinterest.

Well, sure...but would we have any reason to expect the "revolution" to be led by corporate marketing?

Obviously, the enormous conglomerates that own most cleaning-product brands have no vested interest in keeping men out of housework, or "devaluing" the use of their own wares (sorry, but this devaluing business is becoming a broken record). They want to sell the products to as many people as possible, including men.

However, they also want them to appear as benign and gentle as possible, considering that many of them have their origins in petrochemical byproducts and are unnecessary at best, toxic at worst. This is especially true of cleaning solvents and detergents, which are more frequently advertised with the word "mom" than almost anything else on a shelf. The maternal archetype is a gold mine for communicating trust and safety to consumers, whereas masculine/paternal imagery suggests strength and power. (We can also point to classic ads for Brawny and Mr. Clean, which harness both archetypes).

Yes, that is an archaic vision of parental roles, but we're talking about a business that preys on the subconscious, where all of our inner traditionalists are buried.

I am not arguing with the notion that femininity is broadly devalued, but it's not terribly insightful to slap that premise across every single thing that references gender, as though that's the whole story. And just because you juxtapose a few pictures doesn't mean they were conceived with the same intentions; the gendering of kids' toys, for example, has a much different agenda from the "mommifying" of toxic cleaning solvents and phosphate-laden detergents, which is IMO even more sinister.

I keep hearing a radio ad for Wal-Mart that is similar to #3.  It claims that "real moms" are comparing their grocery store receipts to Wal-Mart's prices.  Apparently fathers and child-free women don't buy groceries.

[...] president and founder of http://www.LesTout.com, the number 1 source of every day life suggestions.Hoarders come in a lot of forms. Folks who hoard stuff are defined as folks who can't stop collectin...ot able to reside with out them. Other hoarders have several cats for the compulsive disorder that [...]

[...] what we already know is being pointed out here: cleaning products (and parenting-related things) are still almost exclusively marketed to women, and we still do most of the chores, regardless of outside commitments. Let me tell you, my rage [...]

Am I the only one that is put off by using NorAm first names for cleaning products? I commend their choice to use names and images of more than one gender, but I can't see myself saying "I'm going to go get the Dave/Kate, the cat puked again."

Where can I find some "Bill"? My husband would love it!

Only moms feed their kids breakfast.
Also, most of those pictures give me the creeps.  I don't think wasting food is "cute."

[...] role(s) men play. Socially, we still focus on only ‘women’ as the primary parent – so much so that media campaigns are continually skewed in that direction. Our definitions of good parenting – for both men and women, remain marred by these old norms. [...]

The Jam of Oppression?: Feminism, “New Domesticity,” and Gender-Neutral Home Cooking « I'll Make It Myself! — August 22, 2012

The UnLady Guide To Dating And Marriage Bliss (For Ladies) « The UnLady — December 2, 2012

[...] ads are still directed almost exclusively at women. When men are featured they’re typically shown to be incompetent and in need of [...]

What strikes me in the 'counter-example' of Eco Cleaner, is that Bill and Dave get the all-purpose-cleaners and Suzy and Emma get the specific laundry soap and dish soap. Just like grooming products for men are usually multi-purpose ('no fuss'), e.g. shampoo-shaving cream-shower gel- in one.

[…] Women cook, clean, and raise children: “Selling cleaning and parenting to women only“ […]

Guys, may I join your discussion here? So, not long ago, according to the reviews on this site, I bought a Nautilus CC Supreme 2022 that is ideal for washing things like swimming pool. I think you should try this perfect service for your review of different product reviews. Moreover, I could tell you that you also can revise this useful thing.