Both Sexes Increasingly Value Both Career and Family

The recent Atlantic article by Anne-Marie Slaughter revived an ongoing conversation about women’s efforts to balance work and family in their lives.  Unfortunately, new data from the Pew Research Center suggests that striking a happy balance is increasingly out of reach.  This is because the value women place on both parenting well and having a successful career is growing.  In other words, women’s expectations are rising.

Interestingly, men’s expectations are rising, too, increasing the degree to which their desires might conflict, but to a somewhat lesser degree.

Let’s look at the data.

Young women between 18 and 34 are more likely to say that a successful career is “very” or “one of the most important things” in their life last year, compared to 1997.  The percentage has gone up 10 percentage points for women, while it went up only one point for men. 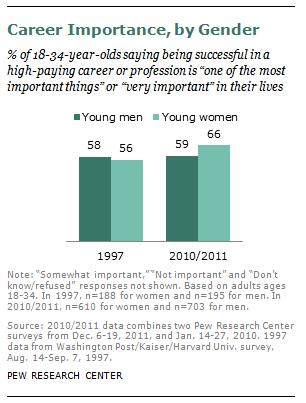 Young women are also more likely to say that being a good parent is “one of the most important things.”  Up a whopping 17 percentage points since 1997. This desire has risen significantly for men, too; 47% of men now say that parenting is very important, compared to 39% in 1997. 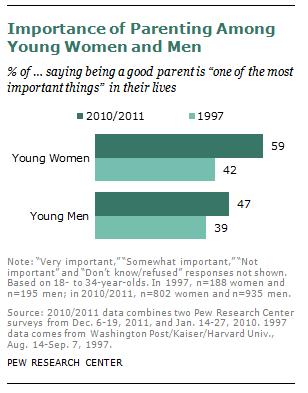 It will be interesting to see how public policy responds to these raised expectations, if at all. The U.S. is notoriously stingy when it comes to helping families balance these competing pressures, as this post on paid parental leave illustrates.  The time bind, though, is tightening and something will have to give.

I'm a little ashamed to admit, I just barely got around to reading the Atlantic article "Why Women Still Can't Have It All."  I greatly appreciate this article and the discussion it sparked, but I can't help but feel that there is still a huge part of the conversation that is missing. While women are talking about how to have a career while maintaining a family, no one is talking about how men can have family time while maintaining their career. This leads many people to believe that men don't want/need/value family time. Yet I never met a man with a family who thinks they have enough family time after working an 8 hour shift. Contrary to popular belief, women have not discluded men from the conversation. We often mention how the flexibily mothers want isn't a special intrest because it would benefit everyone. But men, we can not carry the conversation for you. It is your turn to talk about how you value family. It is your turn to talk about the benefits of being around for your family. It is your turn to talk about how you need flexibility so you can have it all.

Interesting post. One note - we should be careful with the 2010/2011 numbers, because they combine two surveys taken nearly two years apart - Jan 2010 and Dec 2011. Also, the number of respondents for the 1997 survey isn't huge. The point may well still stand, but cite these numbers carefully.

I think I'm missing something.

The article discusses "being a good parent" not just "being a parent".  It's two completely different things.

I think we all want to be good parents, if we ever are parents, but we may not even want to be parents to begin with. Who would admit to wanting to be a bad parent? It's a flawed question.

Unless we know whether the respondents actually plan to have kids (in the short term) the question is kind of useless.

Being a parent itself might be too far out of mind for practical consideration rendering a commitment to be "a good parent" a rather hollow promise. It costs me nothing to say I'd want to be the best parent ever (as a hypothetical) if I don't also admit that I don't actually want to have kids.

Both the relevant graphs show 'being a good parent' with no numbers saying how many of the respondents actually have or plan to have kids in the short term.

[...] Men’s most common fallback position is to establish a neotraditional division of labor: 70 percent hope to convince their wives to de-prioritize their careers and focus on homemaking and raising children.  Women?  Faced with a husband who wants them to be a housewife or work part-time, almost three-quarters say they would choose divorce and raise their kids alone.  In fact, despite men’s insistence on being breadwinners, women are more likely than men to say they value success in a high-paying career. [...]

Women would rather switch than… « Masculinity Bites — February 4, 2013

[...] The article stunningly continues with the statistical assertion that, “Faced with a husband who wants them to be a housewife or work part-time, almost three-quarters of women say they would choose divorce and raise their kids alone.  In fact, despite men’s insistence on being breadwinners, women are more likely than men to say they value success in a high-paying career.” [...]

[...] Images post on this, “in fact, despite men’s insistence on being breadwinners, women are more likely than men to say they value success in a high-paying career,” as shown in this graph from the Pew Research [...]

Both “Sexes” Increasingly Value Both Career and Family — March 28, 2014

[…] or not marrying. In fact, despite men’s insistence on being breadwinners, young women are more likely than young men to say they value success in a high-paying […]