Including Racial History in School Curricula

Way back in January, Dolores R. sent us a link to an illustration of how not to integrate social studies into the math curriculum, posted at SocialisTexan. Apparently some teachers in Gwinnett County, Georgia, thought it would be good to have some math word problems that connected to lessons from social studies, including racial history and slavery. One of them wrote some questions, which nine different 3rd-grade teachers approved; when the issue came to light, four had distributed them as part of a homework assignment. Parents complained upon seeing the questions, which many felt were inappropriate. For example, some questions asked students to calculate how much cotton or oranges slaves would pick, while another asked, “If Frederick got two beatings per day, how many beatings did he get in 1 week?”: 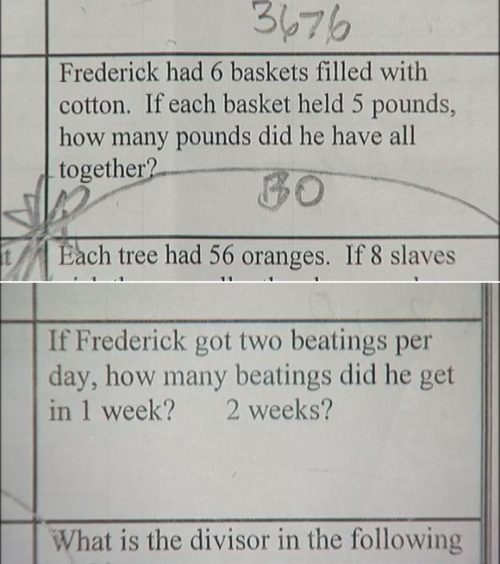 The teacher who created the questions later resigned and apologized. From all appearances, he really was trying to think of some way to connect different aspects of the curriculum. However, this chosen method was…very poorly thought out. The homework questions are insensitive, seeming to trivialize the violence of slavery rather than reinforce history lessons about it in a useful manner.

So how might topics from social studies, math, and other areas of the curriculum be integrated in a useful way? Sylvia Glauster, a middle school math teacher at The Ancona School in Chicago, emailed us about one example that I think connects discussions of racial history to math in a much more constructive manner.

Sylvia said that she often uses Soc Images posts to spark discussion among students, and that some of her students became particularly interested in racist images, including those in a post Lisa wrote several months ago about the historical meanings behind images of African Americans with watermelons: “Initially, they were not sure why some of the pictures could be viewed as racist, and hypothesized that their friends might also miss the connections that the blog post explains.”

So they got busy and developed a study to investigate further. Two students — 5th-grader Morgan and 6th-grader Sara (whose parents gave permission for their names to be used here) — chose five images and surveyed a random sample of 34 other students to see how many found the images racist. The students explain:

We started out by making a survey chart and getting pictures that we thought were racist.  Next, we surveyed people anonymously.  With all our data that we collected we made pie charts [for African Americans, Whites, and Other race/ethnicities]. 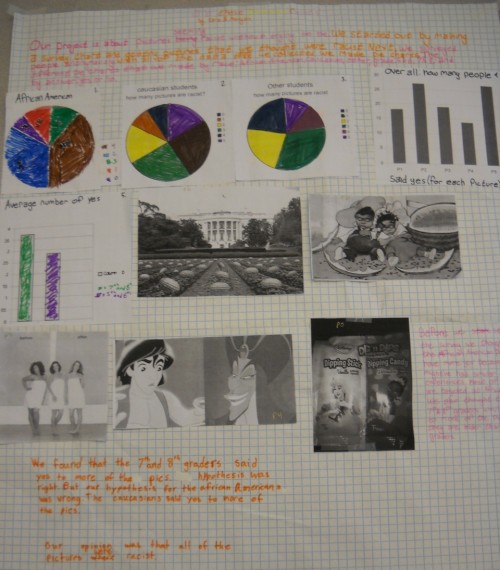 The students had two hypotheses:

Before we started the survey we thought that the African American people would have more yes’s because they might have had similar racial experiences.  Most of the pictures are targeted at African Americans. We also thought that the 7th and 8th graders would say yes [they are racist] to more of the pictures because they are older than the 5th and 6th graders [and have had more experience]. 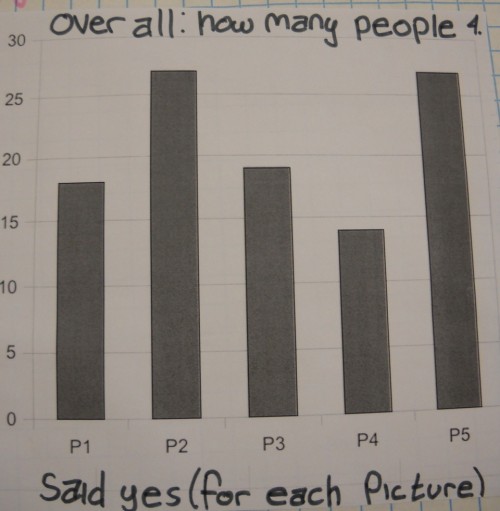 The students had a good introduction to the research process. While one of their hypotheses was upheld, the other wasn’t: 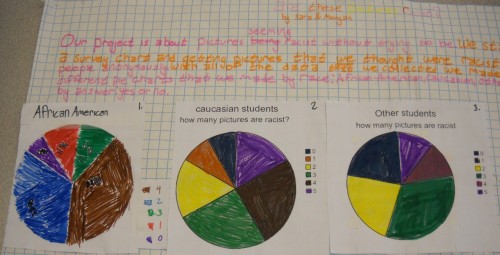 Interestingly, Sylvia says that “students were least likely to find the caricature of Jafar [from Aladdin] racist, which my students think is probably because our culture is more aware of racism against African Americans.”

This, I think, is a more thoughtful cross-curricular activity. It doesn’t just shoehorn some references to slavery or racial history into a math problem in a superficial way. Students thought critically about the topic and the larger social and historical context, all while practicing important skills in math and statistical analysis.

I’m sure that guiding students through a project of this sort takes significantly more planning and effort than writing the word problems did. But that’s part of the point: if you want to help students understand our complicated racial/ethnic history, as well as how race operates in our society today, you can’t do it on the cheap. It takes careful thought and a lot of preparatory work by the instructor to create activities and materials that foster critical thinking in a sensitive, appropriate way. Kudos to Sylvia for providing a good example, and to Sara and Morgan for doing such a nice job on their project!

I don't know, you could do some lazy word problems without being offensive.

"200,000 protestors are going to Washington to hear the "I Have a Dream" speech. [insert standard word problem that has them arrive on the same day]"

Or calculate the economic effects of lower rates of pay on total lifetime savings and income. Or what % of the people in a given state were not allowed to vote at different points in time, and what was the correlation coefficient between that and number of minorities elected to public positions. There are all sorts of parts of analysis of historical data that will touch on important events in the history of race without directly being offensive.

None of them are as good as running actual sociological research in your classroom, of course.

It seems a little over the top that someone lost their job over an honest - if not fantastic - attempt to educate children about an important topic. The questions published do not seem actively offensive, and I'd like to see a more rigorous reason for them being wrong than the endlessly flexible 'inappropriate'. The quotes from the parents in the linked-to news story just express their outrage, without giving any reasons or arguments.

After all, its a widely acknowledged problem in education that different subjects don't join up (with the consequent time lost at the start of each lesson as kids refocus on an entirely new set of knowledge), and this seems like an attempt to correct it.

Would the effort have been rescued if the teacher had put short blurbs at the start of each question giving the historical context?

So...how is Jafar racist? Is it because he has white makeup on? Because he turns into a snake? He's evil, sure, but I don't see how he is a caricature of negative Arabian (?) (Indian?) stereotypes. Aladdin isn't racist, he's adorable. Jasmine is definitely sexualized, though! But also a cool princess? Aladdin needs its own post.

After reading this article, I find it difficult to believe the teacher's statement that he was genuinely trying to be objective in his historical portrayal of racial and historical issues. That is a lame excuse. As Yrro Simyarin points out, there are many hypothetical word problems that come to mind as neutral, or positive inclusions of people of color in an American historical context; here are a few examples:

"If Jim Thorpe won an OIympic medal for beating his opponents to the finish line by .87 of a second, and his velocity was 22.3 miles per hour, how fast were his opponents running?"

"If Sojourner Truth addressed the First Annual Meeting of the American Equal Rights Association on May 9, 1867, urging gender equality for all races of women, and the Woman Suffrage Amendment (19th) was passed in 1920, how many years passed before her goal was fulfilled?"

These are all off-the-cuff. That guy was full of crap.

* I'm an English teacher, not a history teacher. I may need to fact-check*