More on Whiteness in Fashion

My post on the centrality of whiteness in fashion photos — whether magazine photos, catalogs, or ads — inspired several readers to send in other examples related to this trend.

YetAnotherGirl and Julian S. sent in a link to a Jezebel post about the new J.Crew catalog, which presents the two models in J.Crew clothing amid a group of local children, who are used to help signal the exoticism of the location: 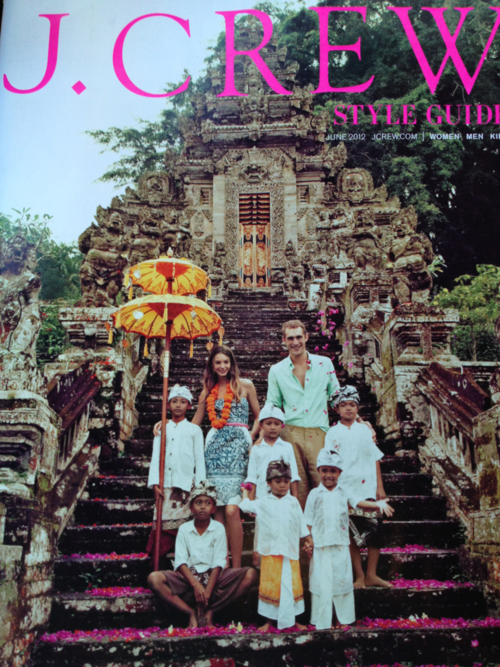 Marianne sent in a couple of ads for Naf Naf, a French fashion brand, that show a slight variation, utilizing ethnic/cultural differences within Europe. They show a “luminous, lightning-blond caucasian woman and the dark, anonymous and yet welcoming bohemians,” seemingly meant to evoke popular imagery of the Romani.

And finally, H. pointed out Louis Vuitton’s “Journey” commercial, which she actually saw at an indie movie theater. It provides an interesting counterpoint, as groups other than Caucasians can be included as central characters in the narrative, as long as they are privileged LV consumers, with others presented in the more peripheral setting-the-tone role. As H. explains,

In this ad they include the story line of the (presumably African?) black man who is dressed in an elegant Western-style linen suit, but who is barefoot and rubbing the dust off of an old family photo. An interesting racial counterpoint — and one which suggests a metanarrative which is not only about race but also quite pointedly about class.

I know this is besides the point, but that model in the second Naf Naf ad looks like her hand is MELTING. i cant quite figure it out.

And of course the colorful costumes and vardo  help to emphasis the "otherness" of the Romany and tie them to a specific time (the past, quaint). They don't exist in the now among "real" people, they are like a theme park or something out of a fairy tale or Ren Fest.

What really surprises me is that in an industry supposedly based on creativity and pushing the envelope, no one ever seems to realize how cliche this kind of thing is. It makes me want to be a fashion photographer just so I can do shoots of gorgeous black or Asian models in designer clothes surrounded by Swiss villagers in dirndls and lederhosen backdropped by snowy Alps, Provencal peasants with geese and cows, etc.

It's worth nothing that when the "others" are actually other models, they look quite happy, but when they seem to be random citizens pulled from the street, they tend to look very unhappy.  Compare the first and second set of pictures.  In the second set, the "dark bohemians" are clearly models and look like they're having a fine time entertaining the blonde woman.  In the first set of pictures, only two of the children are smiling, and one of them looks like he was instructed to smile, as opposed to smiling because he's happy or because he enjoys being photographed.  I always wonder, with these pictures, are the random people-props they use compensated monetarily?  How do they find them and get them to agree to be in the picture?

[...] Sports Illustrated coverJezebel argues that the magazine is perpetuating racial stereotypes by drawing power and class lines between the Westernized models and the "primitive locals" and points to a long history of media using people of various ethnicities as "extras", citing Nylon magazine, the Free People catalog, British Vogue, and J-Crew. [...]

Uh, if you're selling white clothes to white people, you're probably going to want to use a white model.

Vietnam And Its ‘Exotic People’ Are The New Black, According To Absurd Luxury Retailer Campaign | Peace and Freedom — February 25, 2013

[…] I was bothered by Jezebel lumping the Sports Illustrated photos with these images from a J. Crew catalog that came out last […]

Angelina Jolie must be digging this so hard