The Economic Importance of U.S. Cities

Peter Nardi, from Pitzer College, let us know that the McKinsey Global Institute recently released a report on U.S. cities and the economy. Large cities (those with 150,000+ residents), are more dominant in the U.S. than in Western Europe, China, and India. More of both the national population and economic productivity (measured by GDP) is concentrated in cities in the U.S. than in those other areas, with the exception of the concentration of GDP in large cities in China: 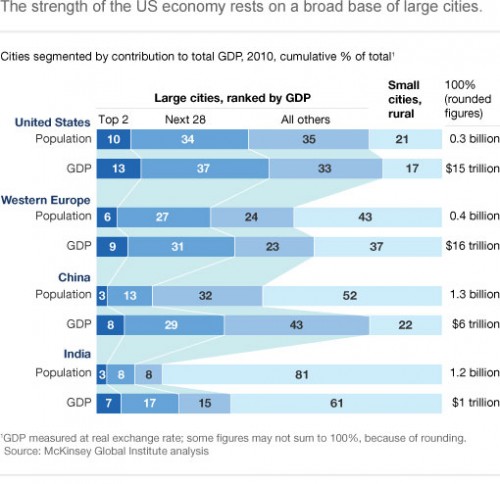 So overall, the vast majority of the U.S. population lives in cities, and they drive economic development and change here. But of course, the fortunes of cities within the U.S. have varied greatly. If we look at the top 30 cities (by GDP) in 1978 and 2010 (in constant 2010 dollars), we can see the decline of many older manufacturing and transportation centers in the northeast and Great Lakes areas. Milwaukee, Indianapolis, Columbus, and Buffalo fell out of the top 30 altogether, while Philly, Detroit, Pittsburgh, Cleveland, and Cincinnati experienced decreases in their contributions to the overall economy, as did three river port cities — New Orleans, Kansas City, and St. Louis. On the other hand, the Sun Belt has become much more prominent, with cities in the South and Southwest entering the top 30 or rising in the rankings (and 6 of the top 30 from California alone): 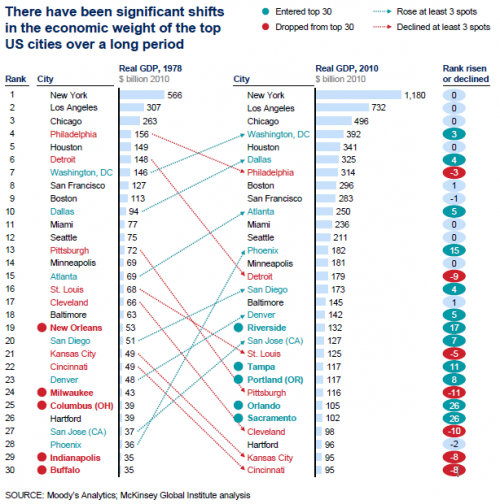 Most of the economic growth, the study finds, is due to expanding populations. Large cities aren’t becoming much more productive — cities with high overall GDP growth didn’t have higher per capita growth rates than other cities, so it isn’t that their economies are transforming in ways that make workers tremendously more productive individually. They’re growing much faster in terms of population, and that expansion pushes economic growth.

The report also found there’s no single path to successful economic growth for cities. Some with diversified local economies did very well, but others were below average; similarly, some cities that were largely dependent on just one or two economic sectors have suffered, but others did quite well. Check out the full report for a much more detailed analysis on the factors that influence the rise or decline of the economies of U.S. cities, as well as future challenges.