The Effect of Title IX on Sports Participation

Title IX, an amendment to the Civil Rights Act of 1964, stated that “No person in the United States shall, on the basis of sex, be excluded from participation in, be denied the benefits of, or be subjected to discrimination under any education program or activity receiving Federal financial assistance…”  Passed on this day in 1972, this policy meant that schools and colleges receiving federal funding could not legally give preference to men.  Instead, they had to allocate their resources to men and women in proportion to their interest and enrollment.

The intention of the policy was to change the norms that gave preference to men in all sorts of fields, from medical schools to sports teams.  Because most schools and colleges have extensive athletics departments, sports was included among the resources that the schools were required to dole out fairly.

Accordingly, even grudging and partial compliance with the requirements of Title IX dramatically increased the opportunity for women to play sports.  In the next 35 years, women’s participation in high school and college sports would increase by 904% and 456% respectively (source).  Today, 42% of high school athletes and 45% of college athletes are women (source). 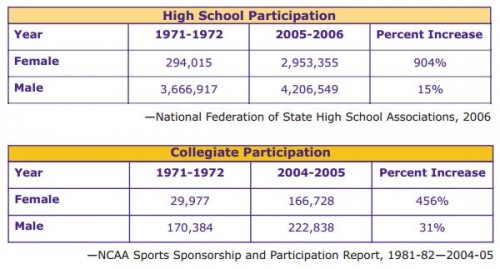 Title IX is often mistakenly accused of forcing schools to cut funding for men’s athletics.  In fact, funding for men’s athletics, as well as the number of men who play sports in school, has increased since Title IX.  The chart above also shows that men’s participation has increased by 15% in high school and 31% in college.  It’s not true, then, that Title IX has led to fewer male athletes (especially because some colleges count men as women).  Still, there is great resistance to the Amendment, with a particular emphasis on sports.  Many schools are only marginally compliant, and then only because (tireless) Title IX Officers keep pressure on institutions to follow the law.

It will be fascinating to see how changing college demographics affect the politics around Title IX.  After all, forty years later, people still argue that it’s not right that women’s sports get (almost) as much funding men’s.  Now there are more women on college campuses than men, so proportional funding may mean spending more money on women’s sports than men’s.  Fire and brimstone upon us.

I think most of the argument that women's sports should receive less funding than men's stems from the fact that they generate less revenue. Men's football and basketball generally pay for the rest of the athletics department.

Maybe with more women alumni, there will be more people attending women's sports games and they'll generate more funding for themselves.

It seems that there's a mislabeling in the university table: the column says 1971-1972, but the citation says 1981-82. Do you know why there's this apparent mismatch?

You figures show that participation has increased, but not that funding is anywhere close to equitable. I believe that men's athletics still outspends women's athletics by a huge margin.

Title 9 exists because of the tireless work of second wave feminists.

I notice when people talk about it, they pretend it just happened in the same way voting rights for women just happened.

THE EFFECT OF TITLE IX ON SPORTS PARTICIPATION « Welcome to the Doctor's Office — June 25, 2012

This is terribly misleading use of statistics.  You should also include the percentage of male/female students who participate in sports to more accurately show the increase in participation.  Sure, more men and women participate now, but there are also more students now, which is not accounted for.

[…] Data from the US shows that following the introduction of Title IX in 1972, participation of both men and women at both the high school and collegiate level has increased.  The following table is reproduced from this website: […]

School Sport and the Gender Gap: the UK Does Not Need a Title IX; It Needs Transparency | Sporting Speak — August 14, 2014

[…] increase in contrast with a mere 22% increase for boys during the same time frame. In the US today, 42% of high school athletes and 45% of college athletes are women. From these statistics, then, it is no surprise that many conclude that it is legislative change […]

I see you don't monetize your blog, don't waste your traffic,
you can earn extra cash every month. You can use the best
adsense alternative for any type of website (they approve all websites), for more details simply search in gooogle: boorfe's tips monetize your website