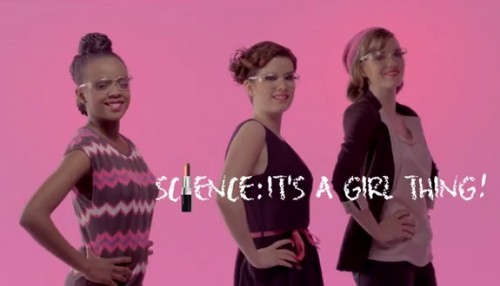 Paul (an Irish grad student), Carys G., Zeynep A., Marjan vdW., and one other reader all sent in a link to a new video released by the European Commission. The video, “Science: It’s a Girl Thing!”, is meant to encourage girls to consider careers in the natural and physical sciences, presenting science, as the title suggests, as an area compatible with femininity and other “girl things” — make-up, high heels, and fashion:

The video has been roundly criticized (check out the Twitter feed for #sciencegirlthing), both for presenting a stereotyped image of girls and for misrepresenting the scientific workplace (one female scientist Tweeted wondering what will happen to any girls possibly drawn in by this campaign when they learn that in many labs, open-toed heels violate safety codes).

I suspect the makers of the video believe they are doing that first thing — trying to push back against the idea that science is unfeminine. Indeed, the video is part of the larger Science: It’s a Girl Thing! campaign, and the website also contains 12 profiles of female European scientists, which provide more realistic depictions of women working in a range of scientific fields. But many viewers, including a lot of scientists (both women and men), see it as the second thing — another example of what I described in my original post of the cartoon as “superficial attempts to overcome the often structural constraints that keep women out of masculinized arenas of social life.”

Indeed, girls don’t just need to be told “you can do science and look cute too!” In fact, a post at New Scientist discusses the results of a recently-published article by Diana Betz and Denise Sekaquaptewa, “My Fair Physicist? Feminine Math and Science Role Models Demotivate Young Girls”. Betz and Sekaquaptewa found that images of conventionally feminine women in science fields actually demotivated female middle school students and decreased their perceptions of their likelihood of success in science and math. Girls appeared to see these images and, instead of thinking “Oh, I can like makeup and clothes but still do science!”, they thought, not unreasonably, “Oh, great, so I have to be smart and still meet all the demands of conventional femininity, too?” Instead of inspiring girls, the images were threatening, making them feel less likely to succeed in science and math. This effect was most pronounced for those girls who weren’t already interested in such fields — presumably the exact group campaigns such as Science: It’s a Girl Thing! are meant to attract. As the authors conclude (p. 7), “Submitting STEM role models to Pygmalian-style makeovers…may do more harm than good.”

Wow. Just wow. I wouldn't even portray that film as trying to appeal to feminine interest in science--it's way too sexualized.

I'm a non-girly female scientist and what I want to see is more options in STEM for different gender expressions. I am extremely turned off by the color pink, but my co-worker loves her pink safety glasses, and I want her to be able to buy those. They should be "just another option" in the catalog. When we have middle school girls come visit, a frequent comment we get is that they are pleasantly surprised that you can wear feminine clothes and do science--one of our computational chemists wears heels every day and the experimentalists have a wide range of dress and hairstyles (me: ponytail and jeans, hopefully not stained, others: french braid and cute tops, just not so expensive to have a lab accident be disappointing). I get what the study is saying about presenting science as a feminine option to an entire group of people, but it's also helpful at the anecdotal level for some individuals. I'm still not pro-super-girly science, but if I'm hosting a visitor with a better fashion sense than I, I make sure that she meets at least one more fashionably dressed scientist while she's here.

From the coquettish giggles to the supermodel posing... it's just all so awful.

My 3-year-old daughter came home from preschool the other day telling me all about the various forms of exercise: "... swinging on the swings, and swimming in the pool, and hopping on one foot..."  So I take every opportunity to point out science in real life: "This insect has many more legs than we do.  How do you think it walks?  Look, there are similar rocks at the top of the hill and all the way at the bottom.  How did they get there?"  Just basic questions help show her that science is all around us and encourage her to make hypotheses and solve problems.

I sincerely hope her teachers never resort to something as blatantly sexist and stereotypical as this video.

It could have been such an amazing opportunity to really talk about women in science. Well, at least we're talking...

I think the reading of an ad like this isn't just "I have to be smart and still meet all the demands of cultural femininity too". Another reading is, "so no one will take me seriously in a science field." Since these girls are clearly models and not scientists (you see them strutting around like they are on a catwalk, but not doing anything remotely scientific), it makes it look like aren't really part of the scientific world. It would make a lot more sense to show real scientists who wear makeup, feminine clothes, etc (as one person already mentioned in the comments)

This post reminds me of the recent New York Times attempt to erase womens' innovations in the field of computer science/internet development.

Let's not forget the hiring process as another obstacle. There are still some very biased individuals who will turn down a qualified female applicant for a male applicant that isn't as qualified. There are still women who once they get into a high ranking position within a company, try to drive off any new female hires so they can stay 'the only woman' in the company. We need to focus on these issues like these in the scientific and technological fields as well.

The video was taken down, but here's another link
http://www.youtube.com/watch?v=g032MPrSjFA&feature=youtube_gdata

Leave STEM to the Chinese. We need more sociologists.

Oh yikes. I think the solution to this problem lies in effective, encouraging primary education. Regardless of whether science teachers or general ed teachers are men or women, they should take special care to affirm (ALL) students when they are enthused by scientific concepts. Ideally, while saying things like, "Look how you solved that problem! That's what a great biologist/botanist/mathematician/etc does!" If students learn early on that what they are excited by actually IS science, they'll be more likely to pursue it later, I'm sure.

The video is private now; here's one hosted at a different account:

I'm an 18-year-old who has always been interested in science since I was little (in fact, I'm going to Uni to do just that).

I find this campaign idiotic.

Because the problem is one of FOCUS. Instead of saying "OMG! You can be like, so totally a woman and still do science!" they should do as my teachers and family, who said: "If you're good at it, why the hell not?".

Teachers should look at kids who are talented, regardless of gender, and encourage them all. I got in inter-school Mathematics, Science and Geography competitions, additional classes, and o on and so forth; and they encouraged me to do the subject even though I already was excellent in more traditionally femenine subjects such as Languages (I was the best in English, and had already won several intra-school writing contests, and spelling bees and classroom debates).

They never once told me "boys are better at that stuff". I WAS the best, and they made sure to encourage me to keep going on, even when other subject teachers encouraged me to strive for a career in their subjects.

And I choose science because I loved it, and because my teachers made it seem so exciting and new. And I'm not the only girl in my year group who's taking a career in science, several of my classmates have taken an interest in biotech and food engineering.

I think it's becasue the teachers always told us to findo our own answers to questions we didn't knwo. RESEARCH!

I believe that if you look at the work being done with these new orbiting satellite telescopes used in astrophysics, you will notice that a number of the leading scientists and project managers are women. This is the best evidence or selling point I should think for the participation of women in the "hard sciences".

Not to mention that to "be yourself" (as a girl) you have to buy a lot of things.

[...] V: A reaction on #sciencegirlthing at Sociological Images, edited by University of Minnesota sociologists. See also posts by Alan Boyle at MSNBC; [...]

[...] also this analysis by Gwen Sharp at The Society Pages. Share this:TwitterFacebookLike this:LikeBe the first to like this. This entry was posted in [...]

I tried to watch the video, but it appears they made it private.

Be sure to add any extras after you've taken the https://tutuappx.com/ water off the boil. Otherwise, the scents will quickly evaporate.