The Exploitation of U.S. Worker Productivity

In capitalism, owners of the “means of production” (things like land, factories, technologies, and natural resources, or the money to buy these things) employ labor to do the work of actually producing things.  If the system is working correctly, the value of the labor that goes into making something is worth less than the value of the thing.  This way the capitalist can sell the thing, pay the worker, and skim some profit off the top.

What kind of system do we have in the U.S.?  Let’s take a look at some data.

Over at Reports from the Economic Front, Martin Hart-Landsberg posted this graph. It shows that  workers have become increasingly productive since 1948 (i.e., they have created more and more surplus value).  Employers largely shared the increase in profitability with their workers… until the mid-1970s.  Since then, wages have remained stagnant even as worker productivity has continued to rise.  “In other words,” Hart-Landsberg writes, “the owners of the means of production have basically stopped sharing gains in output with their workers.” 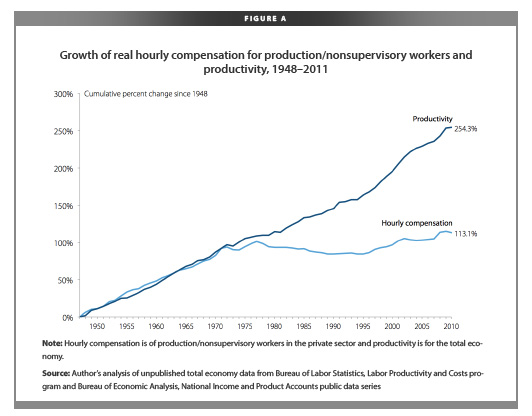 You wonder why the middle class is shrinking?  This is one reason.

This is a great article that casts some light on why statistics like these need to be taken with a grain of salt.

In a nutshell, productivity statistics in the United States are deeply
distorted by supply-chain management, and a lot of the productivity
gains companies have made in the last few decades have more to do with
the processes of globalization and outsourcing than actual increasing worker
productivity in the United States.  The problem is that the middle class is shrinking, but arguably the causes have to do more with neoliberal deregulation and globalization which enriches the global capitalist class without regard for borders at the expense of workers everywhere, than it is a case of skilled and productive American workers being cheated by greedy capitalists.

I wonder how much of this is due to people "working harder or smarter" and how much is due to technological improvements, organizational improvements, etc. If my employer replaces one of my tools and my productivity doubles because of it, I wouldn't expect to be rewarded for that improvement.

I don't get it. What happened in 1970 to cause such a dramatic change?

These responses tend to reach the conslusion that bosses are keeping more of the pie than workers.  Well bosses will tend to keep what they can, except perhaps in a small homogeneous 'village' culture where things are transparent.

So the real question is: Why has the hand of labor, relative to capital, declined in the last thirty years?  Globalisation, outsourcing, technology, immigration (especially illegal) are all factors.

This seems easy enough to understand.  Labor is worth less because of technological improvements.  In many cases the owners are doing more of the work that employees used to do, because technology allows them to.

Those words from economics have meaning.

In capitalism, owners of the “means of production” (things like land,
factories, technologies, and natural resources, or the money to buy
these things) employ labor to do the work of actually producing things.
If the system is working correctly, the value cost of the labor that goes
into making something is worth less than the value sale price of the thing.  This
way the capitalist can sell the thing, pay the worker, and skim some
profit off the top.

Now, since the "production" line represents the economy as a whole, while the "compensation" line shows the total hourly wages paid to production/nonsupervisory employees. If, for example, there was a growth in salaried or supervisory employees since the 1970's that was disproportionate to the previous trend, this is exactly what we would expect to see.

So, is this a management vs labor issue, where the people who took a wage cut to enter a salaried position are now the enemy? Or is it that stockholders are investing too much, and need to be discouraged? Or is it that senior management is easily replaced, have no rare skills, and/or provide little benefit to the company?

I work for [a very large company], we recently saw a chart of per worker ROI that showed basically this same trend.  Something like 4x increase since 1990.


"Those words from economics have meaning."

You don't say! You know, I never would have guessed that unless someone as intellectual and expert as you had pointed it out. And, of course, thanks for robbing the quote from Lisa of all meaning – it reads so much better as nonsense.

[...] to Sociological Images for pointing me to this graph, even if they were too sloppy in their scholarship to follow the [...]

HELLLOOOO, there was a huge technology boom right at the time they split. NOW workers can use computers and with computers came machines and more automation. Of course they're more productive because they have the help of machines!! And why would companies pay people more if they need to invest in machines? PLUS, those workers are easily replaceable. The fact is, is that human work is just not worth as much as it used to be. Just like farmers don't use bulls to pull their hoes anymore before planting seeds - no, they use a tractor and those bulls would be out of a job.