How Race Changes the Relationship Between Religion and Politics

Identifying as Republican is strongly associated with religiosity in the U.S., so much so that people often use the term “Republican” and “Religious Right” interchangeably. Indeed, religious people are more likely to be politically conservative overall, but a Gallup poll shows that this relationship is moderated by race.  The figure below cross-tabulates religiosity for four racial/ethnic groups with the likelihood of affiliating with the Democratic or Republican party or neither.  You can see that the typical relationship — religion/Republican and no religion/Democrat — holds for all groups, except for African Americans. 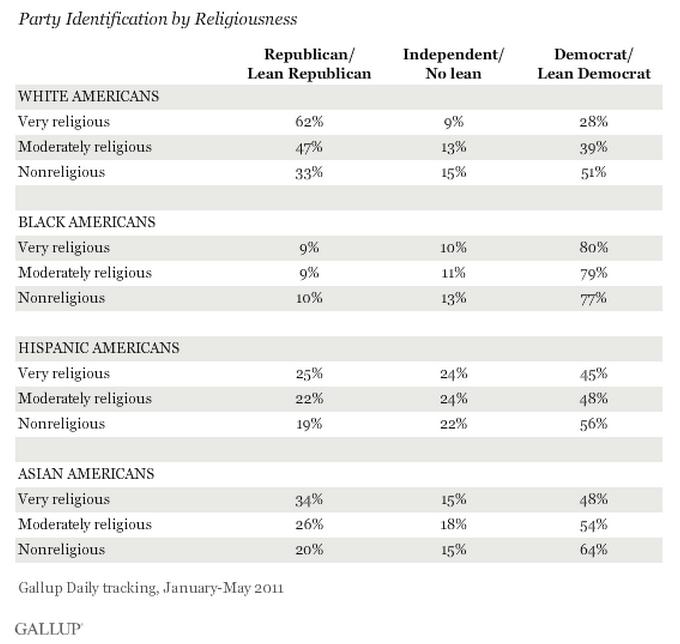 Personal religiousness makes little difference among blacks, however, as the powerful partisan pull of Democratic identification among black Americans trumps any influence of religion.

The report is a great example of the importance of doing intersectional analyses.  When you pull groups apart (by, say, adding race when looking at the relationship between religion and politics), you often find that a more generalized examination is hiding interesting details.

I find it interesting that all of the nonwhite racial categories as depicted in the numbers above show more democrats than republicans within the 'strongly religious' categories in those groups.

HOW RACE CHANGES THE RELATIONSHIP BETWEEN RELIGION AND POLITICS « Welcome to the Doctor's Office — June 11, 2012

[link] How race changes the relationship between religion and politics « slendermeans — August 23, 2012

hope it's not too late to note that these findings are generally going in the right direction (based on other surveys that show the same thing), but the survey was only translated into Spanish. This means that whatever we see on the Asian American findings excludes those who linguistically isolated (I believe up to 20% of Asian American households). We should also keep in mind that identifying as "religious" is subject to a lot of interpretation when sizeable fractions of Asian Americans are nonaffiliated but practice ancestor reverence, or are religious but do not interpret their practice as religious.

[...] How Race Changes the Relationship Between Religion and Politics [...]

quick hit: How race changes the relationship between religion and politics | feimineach — December 30, 2013