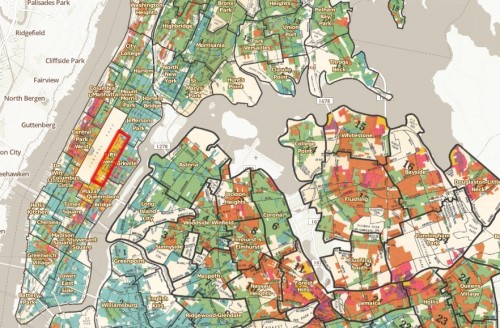 In the early 1940s, four news organizations — the New York Times, the Daily Mirror, News Syndicate Co. (now the Tribune Company), and Hearst Consolidated Publications — collaborated on a detailed market analysis of New York City, complete with statistics about racial/ethnic makeup, color-coded maps of rents, and photos and short narratives of each neighborhood. The Center for Urban Research, at the City University of New York (CUNY) Graduate Center, recently posted the resulting 1943 document, Market Analysis. The interactive archive is a treasure trove of information about New York in the 1940s.

Described as the “district of the silver spoon,” the Upper East Side, then as now, was among the most affluent neighborhoods, with many rents above the then-exorbitant $150 mark (now about $2,500): 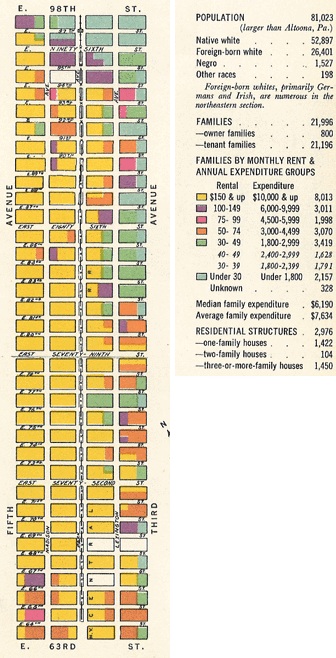 The description points out that even in this affluent area, the rich and poor lived in close proximity, with $30/month apartments within a block of some of the most expensive real estate in the city.

The Lower East Side, on the other hand, is described as “the most populous, most crowded, most old-world district in New York City,” with so many immigrants that its atmosphere is “essentially alien”: 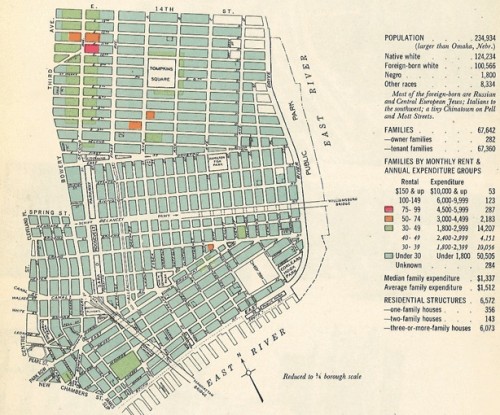 The narrative provides some information about urban planning policies of the time, as well. It notes that the Lower East Side had dropped by over 200,000 in 20 years, noting that “slum clearance” had led to more open public space; it also mentions the emergence of large housing developments, such as Knickerbocker Village — the type of large housing projects, often financed with government funding, that became the preferred solution to providing low-income housing, often leading to the displacement of many low-income residents when their residences were torn down to make room for the developments.

The “tiny Chinatown” that then existed on the Lower East Side at Pell and Mott Streets: 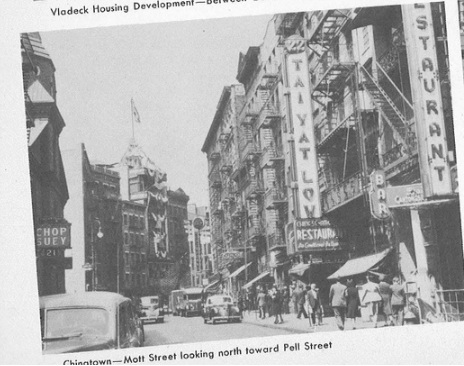 You get the idea. Clicking around for a while provides lots of interesting tidbits to illustrate major demographic, economic, and public-policy changes and how they have impacted life in the city. The Center for Urban Research has also provided a comparison of a number of characteristics between 1940 and today.

By the mid-60s the place had gone to hell in a hand basket and didn't really start to rebound until the early 80s, when a lot of buildings "went coop"! I bought my first place, a studio in a revered pre-war building on 82nd and Central Park West in '84 for about $40,000. Before it went coop the place was a welfare hotel...

We keep a pied a terre in Flatiron now and would LOVE to find the $2500 rents you site. One bedrooms in good doorman buildings are in the $3500-5000 and 2 bedroom apartments are $4500-7000. And people get into bidding wars all the time for coops and condos, which seem to start at $1000 per square foot and can reach close to $3000 for space that's not really super extravagant. LOL.

Cool has moved downtown too and the upper east and west sides don't have the stuff they once did. They're "affordable" now. Amazing how the gentry adopted the city after 911!

It Manhattan wasn't the most diverse and entertaining place on the planet I'd be out of there in a heartbeat, let me tell ya.

[…] the reasonable assumption that she didn’t already live on the Upper East Side, i.e., the “district of the silver spoon”), we can only assume that The Right Automat was near her […]

BestAcademicPapers.com | Gentrification and changing nature of cities — May 4, 2016

Gentrification and changing nature of cities - Write My Assignments — May 19, 2016