The Economic Policy Institute recently released a report looking at the impacts of the recession and its aftermath on the Asian American population. Due to the model minority stereotype, Asian Americans are often overlooked in discussions of the economic crisis or of poverty and inequality more broadly.  It is true that Asian Americans have generally had lower unemployment rates than other racial/ethnic groups, due to their overall higher educational levels. However, if we look within educational levels beyond a high school diploma, Asian Americans have higher unemployment rates than comparable Whites, with the gap widest for those with bachelor’s degrees: 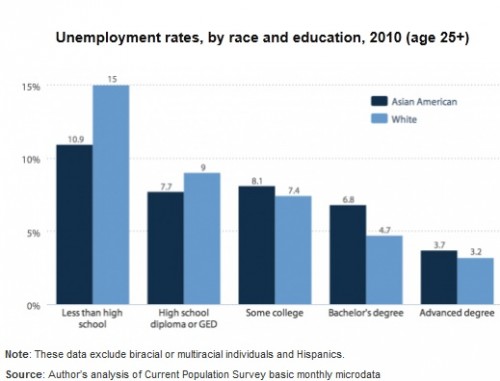 The economic difficulties faced by some Asian Americans is even more noticeable when we look at long-term unemployment (joblessness that lasts 27+ weeks, or more than about half a year). The proportion of the unemployed that fall into this category has risen for every group since 2007, with African-Americans and Asian-Americans more likely than Whites or Hispanics to be unemployed for long periods: 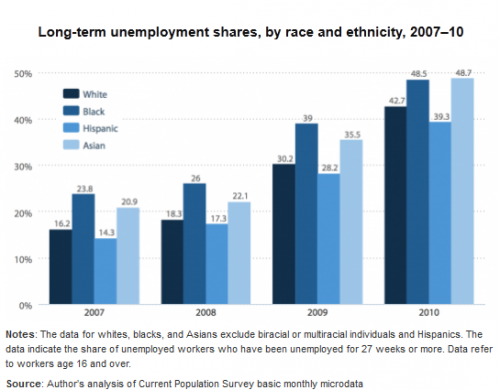 EPI then released an update to the report, incorporating 2011 data. Long-term unemployment has inched upward for every group; half of unemployed African- and Asian-Americans have now been out of work for at least 27 weeks: 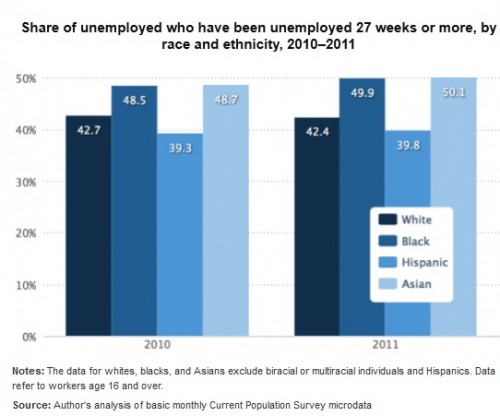 And in fact, despite their higher overall levels of education, Asian Americans now have a higher unemployment rate than Whites (though the rate for both groups is down from the peak in 2010): 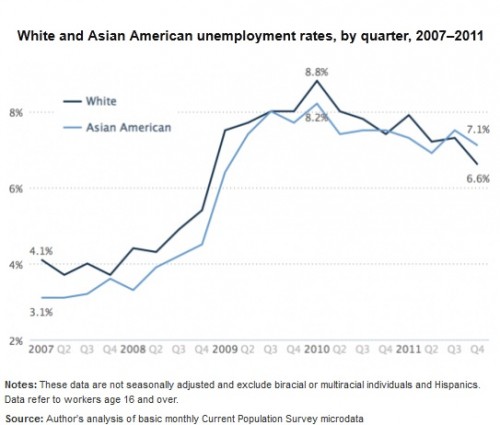 For a discussion of factors that may contribute to these patterns among Asian Americans, such as their concentration in states particularly hard-hit by the recession and the proportion of the population that is foreign-born, see the full report.

In The News | Work-life Balance, Most Unemployed Have College Experience, RIM Layoffs: Up to 6,000, Germany to Lack 3 Million Skilled Workers by 2025 and Much More « Global Job Gap, Local Skills Gap — June 6, 2012

In The News | US Labor Market Is In A Full-Blown Depression, Joseph Stiglitz on The Price of Inequality, States with the widest income gap, Certificates pay off, Layoffs, layoffs and a bit of hiring plus Much More « Global Job Gap, Local Skills Gap — June 7, 2012

Asian Americans and Unemployment « Welcome to the Doctor's Office — June 7, 2012

[...] of poverty and inequality because they’re the “model minority”, and yet are doing worse in the economic recovery than Caucasians by a fair margin? Grar.Anyway, unknown defiant kid with cute calligraphy and better knowledge of Traditional Chinese [...]

[...] The Economic Policy Institute (EPI) also recently released a new report on unemployment among Asian Americans “during and after the Great Recession” (2007-2010). Their report is summarized at the Sociological Images Website: [...]

Most people are ignorant to realize that charts like that that mention the White race also includes Jews. There should be a chart that includes Whites that don't consider themselves to be Jewish. If there was a chart like that then you would notice a huge unemployment for White non-Jews and an almost non existent unemployment rate for Jews. For those of you that think that Jews aren't a race then go to forward.com and type "Jews are a race genes reveal".

Unemployed Pinoys can earn while enjoying time with their family and loveones.
Unemployed is Brave and a choice to be a Freeman.
Join us today at http://www.unemployedpinoys.com happy working at home.