The Minimum Wage and the Cost of Housing

Each year the Department of Housing and Urban Development (HUD) calculates the fair market rents for apartments throughout the U.S. in order to set standards for housing assistance payments and vouchers for Section 8. Using data from the Census and the American Community Surveys, HUD figures out the average cost for various sizes of apartments. You can easily look up data for fiscal year 2012 here.

The generally-accepted standard for affordable, sustainable housing costs is that they should be about a third of a household’s income. The National Low Income Housing Coalition recently released a report on the mismatch between minimum wage — currently set at $7.25 nationally, with some states and municipalities having higher minimum wages within their boundaries — and the standard of living. The NLIHC report included this map showing the hourly wage that would be required for the HUD-calculated fair market rent to be about 30% of a full-time worker’s income: 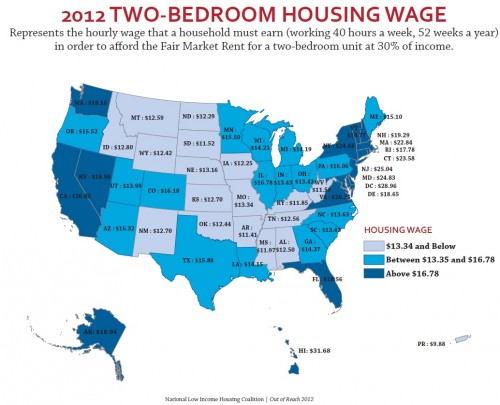 In no state does the minimum wage pay enough to hit the 30%-of-income standard of affordable housing costs. How many hours would a minimum-wage worker need to work per week to make enough that the fair market rent would be about a third of their income? A lot, from a low of 63 hours a week in West Virginia to a high of 175 in Hawaii: 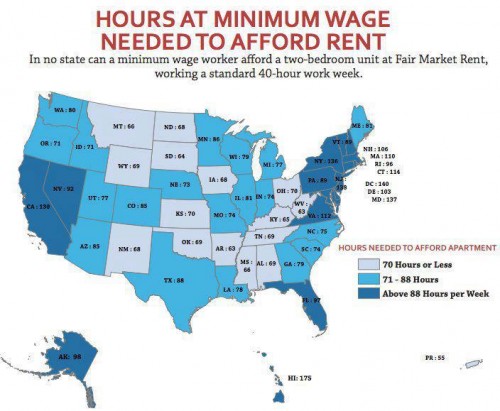 Thanks to Dmitriy T.M. for the tip!

It also shows that for most of the country, a pair of minimum-wage earning roommates can meet what they consider a reasonable standard for living. Which for a two-bedroom apartment doesn't sound particularly unreasonable.

I am a strong advocate of raising the minimum wage significantly. I only make a couple dollars an hour more and I definitely feel the crunch. Housing is about 75% of each paycheck, though that's with all my utilities included.

However, $7.25 is NOT enough to procure a private living space with suitable modern amenities in many areas, which is why most low-wage workers have to live with other people. A studio apartment in my area (within a 15 minute drive of my workplace) is $500/month for the absolute rock-bottom cheapest, which means you'd have to make over $9/hr to live in a private dwelling. $9.50/hr is not unreasonable to raise the minimum wage to; certainly it is more practical than the $19/hr that chart suggests for NH. But it's still a lot higher than $7.25.

I live in one of those places (rural Missouri) where someone can get by on minimum wage (a studio apartment is $200-250 a month, and a two bedroom can be had for about twice that).  And if ObamaCare is not overturned, at least the Medicaid expansion part (pleasepleaseplease), they will soon be able to have health care and thus lead a reasonable existence.  But what about people in those states where housing is much more expensive?  Yrro Simyarin says in "most of the country" it requires 80 hours' work or fewer at minimum wage to fall under this housing threshold; but eyeballing it, it looks like it is not likely to be most of the *population* this is true for, as there are some very populous states where it is higher, in some cases significantly higher.

I wish the first graphic included a little more information, such as an urban average and a non-urban average. I'm pretty sure that anyone living in or close to a desirable city - even in a lower-cost state - will live in housing significantly more costly than the listed average.

The Minimum Wage and the Cost of Housing « Welcome to the Doctor's Office — June 5, 2012

In a sick move, renters have begun using that "1/3 income" standard as a fixed rule, meaning that they won't even consider renting to you unless your income is at least 3x their proposed rent. Which I'm sure leaves a lot of low-income potential renters out in the cold, literally.