Race and Politics in Appalachia

In recent Democratic primaries in Appalachian states, Obama lost 40% of the vote.  The anti-Obama Democrats voted for candidates like “uncommitted” (Kentucky), an unknown lawyer (Arkansas), and a man who is incarcerated in Texas (West Virginia).

Could it be that there’s racism at work in Appalachia?  Or is the anti-Obama vote based entirely on opposition to his policies?

The 2008 Presidential election — Obama v. McCain — offers some hints.  For those with short memories, the Bush legacy — an unpopular war and an economic catastrophe — may have hurt the GOP.  In that election, the country went Democratic.  The Democrats did better than they had in 2004, the Republicans worse.  But not everywhere.  The Times provides this map: 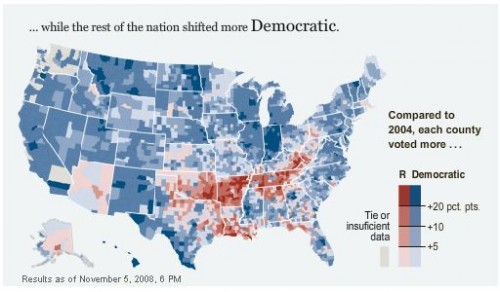 Still, it’s possible that those voters in Appalachia preferred the policies of candidate Kerry to those of candidate Obama.  As Chris Cilizza says in in a Washington Post blog (here), the idea that race had anything to do with this shift is…

…almost entirely unprovable because it relies on assuming knowledge about voter motivations that — without being a mindreader — no one can know.

Cilizza quotes Cornell Belcher, the head of a polling firm with the Monkish name Brilliant Corners:

I’m generally cautious about attributing mental characteristics to people based on a single bit of behavior.  But David Weigel, in Slate, goes back to the 2008 Democratic primaries – Obama versus Hillary Clinton.  A CNN exit poll asked voters if race was an important factor in their vote. In West Virginia and Kentucky, about 20% of the voters in the Democratic primary said yes.  Were those admittedly race-conscious voters more anti-Obama than other Democrats? 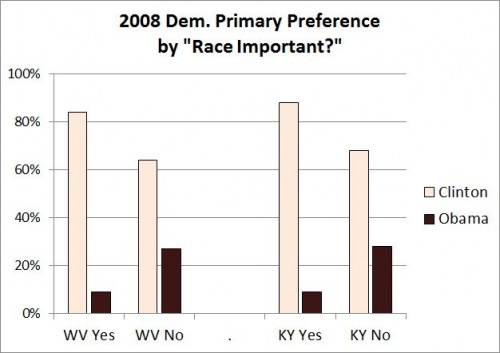 As Weigel points out, this was before Obama took office, before voters really knew what policies he would propose.  Besides, there wasn’t all that much difference in his policies and those of Hillary Clinton.

Cilizza is right that we can’t read voters’ minds.  But to argue that there was no racial motivation, you have to discount what the voters said and what they did.

West Virginia is a traditionally Democratic state now deluged with negative advertising, most of it sponsored by the coal industry, about how Obama and "his EPA" are going to take away their jobs and create "no job zones" in the state. That doesn't preclude race as a factor, but like anything, it's a lot more complicated than how white Appalachians feel about black people.

This piece has so many problems.

1) Loose aggregation of all of the appalachias together that fails to make state-by-state distinctions, which are important when considering voting patterns.

3) Implication that they voted for Kerry over Obama because of race, backed by inference and a quote from a stupid senator making a reference to John Kerry's culture.  Ripe for eyebrow quirking.

4) Exit polls from the Democratic primary, taken by CNN, referred to by a broken, secondary source, that only take two states into consideration.  The 20% is also completely out of context - 20% versus what national average?  In Democratic states?  Republican states?

5) HIGHLY misleading chart. The chart is colour coded brown and peach (i.e. black and white) and is difficult to understand at a glance.  Just looking at it the message is:  Everyone likes white people more.  What the graph is actually measuring is Clinton's popularity versus Obama.  We see Clinton is far more popular with people who said race was important, yes, but this enough enough to draw sweeping conclusions and particularly not enough to apply those conclusions to the other 80% represented on the graph (not that the percentages are noted on the graph).

6) In the discussion of said chart, pro-Clinton voters are being referred to as "anti-Obama."  Deliberate misinterpretation of the data.

That is all besides a failure to consider other factors, such as the prominence of the coal industry in Appalachian states.  Seriously disappointed in sociological images on this one - this is awful research.

Ok, biggest problem with this article is that it is titled 'race and politics in Appalachia' and the region depicted in the first map is not even Appalachia. The Appalachian region runs from New York, through Pennsylvania, West Virginia, Kentucky, Alabama, Georgia, North Carolina, Virginia, and Ohio. The heavier concentration of republican votes in the above map are in Oklahoma, Arkansas, Louisiana, Texas and Tennessee. I fail to see how that is Appalachia? Please correct me if I have got something wrong here. West Virginia, then further referred to in the second figure, is barely relevant in the first map, and Kentucky only slightly moreso.
As someone with long time roots in 'Appalachia', this is offensive at worst, and certainly simply inaccurate at best.

A basic tenet of anti-racism is that low status whites are most racist. In fact, racism is seen as the ultimate low status marker. Thus racists are depicted as 'losers ', 'hicks', Obama's 'bitter clingers', 'rubes', 'mouth breathers', etc. This is all fun until someone names names, because it brings anti-classism and anti-racism into an awkward competition.

Just to clarify: we're all racist.  It's a racist society, and presumably, you're in it.  So you interpellate yourself within this context and exist as a function of it.  It's a matter of degrees.  So it might be better to ask how much racism is at work rather than whether there's any...

The breathless indignation in the comments is really something to behold.  First of all, the map is perfectly well labelled for anyone who can read for understanding.  But okay, so it's not "Appalachia".  Call it a "redneck belt" or whatever: the point remains that to say the people in this region who voted for Kerry in 2004 and then switched to vote for McCain in 2008, going in the opposite direction of the rest of the country, did so because they preferred Kerry's policies...well, c'mon.  How am I not supposed to laugh in your face?

Now I'll grant a half point to the fact that Obama's name and Muslim ancestry likely didn't help.  So, okay: call it racism and/or provincial xenophobia.  Still an ugly picture either way.

Some of the comments are astounding. I'm always saddened by GROSS historical illiteracy on the demographic settlement patterns of the U.S., especially when it comes from those who might fancy themselves as experts on American society.   Yes, the pattern in the map above most certainly DOES reveal a coherent, cohesive cultural subgroup whose origins began with Ulster migration in 1717 (by far, the largest migration during the colonial era), first to Philadelphia, quickly expanding westward into the hinterland and on down the "Wagon Road" of Appalachia, moving westward along the Ohio River Valley and into the Ozarks, Oklahoma and East Texas. This is the heart of "Jacksonian America," Daniel Boone and the frontier culture, etc. Valparaiso University Geographers have done an excellent job mapping "backwoods pioneer culture" from it's colonial hearth. See for yourselves, and compare it to the map on voting habits: http://www.valpo.edu/geomet/pics/geo200/culture/midland.gif

Also, I would advise those unfamiliar with America's historical ethnic settlement patterns to read Wilber Zelinsky's 1973 classic "The Cultural Geography of the United States," specifically the chapter on Appalachia (extending westward across TN & KT to the Ozarks, Okla., E. Tex). For more recent work, see Colin Woodard's "American Nations: A History of the Eleven Rival Regional Cultures of North America." A brief summation on the region we are discussing from Woodard: http://www.washingtonmonthly.com/magazine/novemberdecember_2011/features/a_geography_lesson_for_the_tea032846.php?page=3

Founded in the early eighteenth century by wave upon wave of rough,
bellicose settlers from the war-ravaged borderlands of northern Ireland,
northern England, and the Scottish lowlands, Appalachia has been
lampooned by writers and screenwriters as the home of rednecks,
hillbillies, crackers, and white trash. It transplanted a culture formed
in a state of near-constant warfare and upheaval, characterized by a
warrior ethic and a deep commitment to personal sovereignty and
individual liberty. From south-central Pennsylvania, it spread down the
Appalachian Mountains and out into the southern tiers of Ohio, Indiana,
and Illinois, the Arkansas and Missouri Ozarks, the eastern two-thirds
of Oklahoma and on down to the Hill Country of Texas, clashing with
Indians, Mexicans, and Yankees along the way. Intensely suspicious of
lowland aristocrats and Yankee social engineers alike, Appalachia has
shifted alliances based on whoever appeared to be the greatest threat to
its freedom; since Reconstruction and, especially, the upheavals of the
1960s, it has been in alliance with the Deep South in an effort to undo
the federal government’s ability to overrule local preferences."

No region has received fewer migrants--both international and domestic--than this area, retaining the ethno-cultural traits initially set by frontiersman since the original breaches of the 1763 Line of Proclamation. It is distinct from the Corn Belt/Midwest to the north and also from the agrarian, genteel coastal South to the east and south.

Whether race is the ultimate factor or not (this is the general subregion that gave us the Ku Klux Klan, btw), the historical record is clear in that the red areas depicted in the map above line up almost perfectly with one of the oldest, most well-documented subcultures in the U.S.; an area whose "core" may be Appalachia, but whose 'hill folk' cultural reach extends much farther to the west.

Aside from the issues pointed out by other commenters, I think it's important to recognize that for many voters, the concern isn't that Obama is black so much as that he's percieved as less American because of his upbringing.
Living in Arkansas, I see firsthand the dialogue surrounding Obama's presidency, and while there are a few rednecks who bemoan having a black president, the far more common complaint is that he "isn't American".  Some of this is the result of the birther movement and allegations that he's Muslim (issues unto themselves), but even amongst educated moderates, there's a general feeling that he doesn't view the country with quite the same pride and patriotism as other, preferred candidates.
I'm not saying those views are neccessarily correct, and there are plenty of other biases at work, but it is not as simple as "We don't like him because he's black".

I wish they hadn't used that shade of gray for the graph, it's to hard to differentiate for these old eyes. Small criticism, I know.