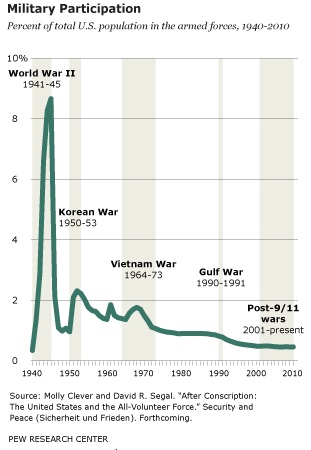 According to the full report, of those in the military, about 2/3 are under age 30. Racial/ethnic minorities make up 36% of the armed forces today. As standards for recruits have increased, so has the educational level of troops: 92.5% have graduated high school, compared to 82.8% of civilians in the same age group.

The Pew Research Center points out that the reduced proportion of the population in the military at any give time means fewer connections between civilians and military personnel, which may influence the experiences of veterans as they re-integrate into civilian life, as well as the degree to which the population is aware of the impacts of military duty — physical, mental, financial, and otherwise — on those who serve.

Thanks to Shamus Khan for the tip!

Is it also worth pointing out that it means fewer people are bound up in a negative-sum, anti-productive sector of the economy, fewer people have their lives defined by addressing problems with violence, fewer people live in an explicitly and deliberately undemocratic, anti-egalitarian hierarchy of power, and (in contrast to the peaks in the graph) no people are trapped in involuntary, life-threatening servitude?

I would say it also has significant impact on what the culture at large thinks about war policy, violence, and soldiering as a career choice. The professional military has made us more effective, but it also insulates the population at large from the real effects, positive and negative, of our warmongering.

I wonder if the stats have allowed for the fact that "military contractors" (meaning: mercs) and other technical civilians (truck drivers, policemen and so on) have been an integral part of the wars in Iraq and Afghanistan, often in larger numbers than the US military?

According to the full report, of those in the military, about 2/3 are under age 30. Racial/ethnic minorities make up 36% of the armed forces today.

Fascinating. I was expecting a much higher fraction. I would guess that 36% means that racial minorities are underrepresented in the military.
Looking at the census data, racial minorities (including whites of hispanic origin) make up 42% of the population from 20-39 and 31% from 35-64 years of age. That works out to an average of 38% weighted in the entire population. So pretty close to the military population.