I discussed the introduction of LEGOs the invention of gendered minifigs, and early efforts to market separately to girls and boys in Part I of this series, covering 1932 to 1988.  The segregation of LEGO into feminine and masculine sets would escalate beginning in 1989.  That year the LEGO group introduced gender to the minifig in a big way with the new Pirates theme. The masculine figs sported copious facial hair and the lone feminine pirate had lipstick and a curved shirt that implied a busty chest. 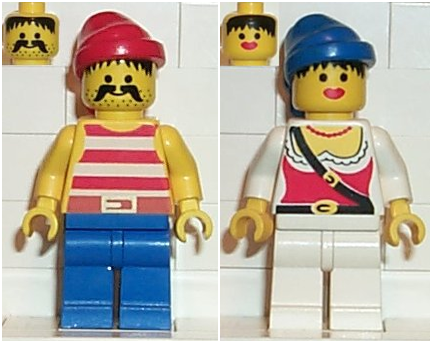 This pioneering pirate was the first in a long line of token females in otherwise male-dominated action-centric themes. The imbalanced ratio of masculine to feminine minifigs persists today, though it has lessened over time. I have seen several different numbers for this ratio, so I decided to do my own count. I gave TLG the benefit of the doubt and counted as gender neutral any minifigs lacking definitely masculine (facial hair) or feminine (lipstick, eyelashes, cleveage) traits, even when LEGO marketing materials clearly delineate them as male or female.

The following graphs represent masculine minifigs in blue, feminine minifigs in red, and gender neutral minifigs in gray. I have also calculated the masculine to feminine ratio (m/f ratio). Ideally this should be 1, indicating that there are equal number of masculine and feminine figures. This chart shows the aggreagate across all themes for the five key years between 1989 and 1999. The m/f ratio for this data is 3.74 (which is a lot better than the initial 13.5 it starts at in 1989, but not exactly something to celebrate). 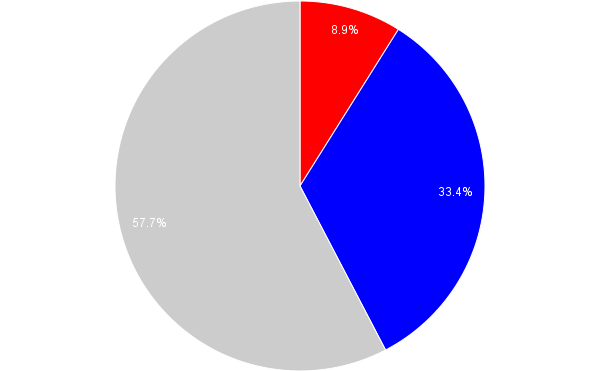 The message that these themes send to children about gender is clear — certain things are for girls only. Namely: fairy tales, equestrianism, the color pink, vanity, and being a homemaker. Boys shouldn’t want these things and the girls that don’t are lesser for it.

The chart below aggregates figures from the first three of those lines across all years they existed (since Clickits was a jewelry line, it didn’t really feature figures).  Beyond the inversely unbalanced the m/f ratio of 0.18 (roughly one masculine figure for every five feminine figures), it is also important to note that the percentage of neutral figs is incredibly low, so playing with these sets reinforces the either/or of gender roles: 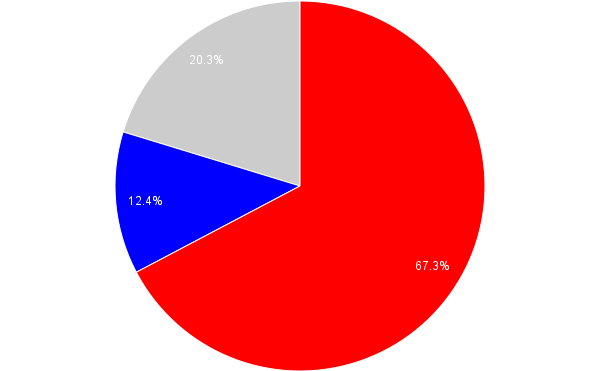 Lest you think girls get all the special treatment, fear not, boys get their share of “boys only” themes. We’ve already discussed Trains and Technic which have long, proud, histories and exist in a blue and black anti-Belville realm (Technic even had Belville-sized masculine articulated figures for a while). In 1998 the ill-fated Znap bucked the trend of “boys only” themes being for advanced builders. It was simple to put together (like K’nex), but never caught on despite being viral. 1998 also saw the creation of a Technic subtheme with even more testosterone than usual: Competition. 2001 saw TLG try to bridge the gap between DUPLO and SYSTEM (for boys) with Jack Stone. 2001 was also the launch of TLG’s attempt to get in to the action figure market: Bionicle. This is arguably a gender-neutral theme, but considering that TLG forgot to include girl’s names for an online character creator for Bionicle’s successor, it’s clear that TLG does not think boys and girls can enjoy the same toys.

As a final note on this era, observe this graph of the m/f ratio on minifigs over time. Notice how it is on the decline (towards gender balance) before sharply increasing in the early 2000s? We’ll explore the reasons for that in the next installment. 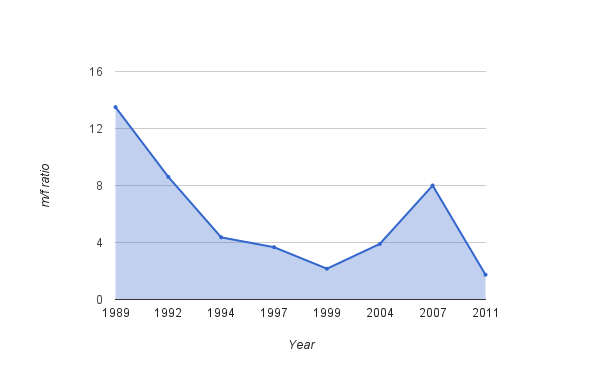 Read Part III of A Historical Perspective on the LEGO Gender Gap.

Again with the moralizing language, and not realizing that 'the building experience is simplified' because they are marketed to the girls that exist, not to the ideal girls who will purchase everything marketed to them and absorb all the implications of them. It is a symptom of gender roles, not a cause.

A couple of thoughts.  Let's leave for another time that the country club set is a little too elitist.

First, the girl-marketed sets may not be that great in terms of building experience, but the "Golden Era" sets I grew up with weren't always that hot either.  Can't be sure what they cost, but I would venture to say that Lego sets of lower price points frequently didn't offer that much of a building experience.  And anyway, I preferred playing out stories with my toys rather than constructing them.   Secondly, in equestrianism, men and women compete against each other in the same events, wear the same clothes, are held to the same standards of endurance and training.  There may still be gender inequalities - there almost always are in anything - but it's still notable for its equality in terms of gender.  So a different interpretation is that it is a perfectly respectful activity for Lego to select for its female-only sets.  As are barbecuing and surfing for that matter.  What is bothersome is not the assignment of gender, but, as Pickett notes, that all three are mostly leisure activities, not professional vocations.  However, I disagree with Pickett that the horseback-riding sets are alienating to boys.  For some reason, riding is a lot more popular among young girls (I remember some girls being obsessed with it when I was younger, and I mean OBSESSED), but it was never presented to us as a "girly" activity that only girls are encouraged to take up.

When my 11 year old son showed my 13 year old daughter the Marvel 'create yoiur own superhero webpage she quickly set to work reassigning genders. The task she set herself was to make the most 'male' figure look as female as possible and vice versa. It was an educational experience - the gender stereotypes are really hard to overcome. Worth trying it for yourself just to see how far these kinds of toy/game go in brainwashing children into what is possible and impossible when it comes to gender.
http://marvel.com/games/play/31/create_your_own_superhero

Any chance that any of this was inspired by the brilliant feministfrequency vlog on the exact same topic (search youtube forLEGO Friends - LEGO & Gender Part 1)? I felt she covered the issue with far more anger (well justified IMO) than the author here imparts.

I've also noticed that in the latest Lego mini figures series, girls often have completely fused legs (indicating a dress). They're so useless compared to the "boy" figures (no legs, can't run, can't be posed properly) that even my daughter doesn't want to play with them.

When LEGO Friends was first announced, and people started discussing whether LEGO was gender-neutal or more boy-friendly, I came to believe that the Bechdel Test was a useful measure of LEGO's problems.In order to play any scenario where women interact independently of men, one needs to have more than one female (or androgynous) minifigs. Without that, female characters lack independent agency. There's a disincentive for girls to want to play with your product.I understand that LEGO has been talking to women's groups since the LEGO Friends announcement about trying to come up with better girl-friendly options. I hope somebody seriously suggests increasing the number of female minifigs in sets and kits.

Kotaku led me here, and it rarely disappoints.  Read both parts, and being an avid Lego fan and new father, my daughter will be encouraged to not allow herself to be fenced in to marketing traps, and hopefully dollars spent and fora like this will eventually diminish the gendered stereotypes further.  I will also point out that some of what Lego does, including Lego Cuusoo and their themed sets, have no distinct bias besides what is selling.  I suppose that is always the bottom line, and perhaps Lego is just mirroring what society is paying for, like any profitable company.

What's with this idea that Lego only has horses in girls sets. As an AFOL I've collected several Castle and Western sets that came with horses.

Dear LEGO®, In Regards to Your Marketing-Imposed Sex Change For My Son! — September 30, 2013

[…] is a boy’s toy, Barbie is a girl’s toy. At least, that’s the way they are marketed. An ouroboros of self-fulfilling marketing that continues for the rest of our lives, even if it’s […]

Nowadays, Lego is facing more issue with the copyright matters. Lepin is a brand that has many similar products as Lego.

I think why we don't move to a new topic. I suggest new one relating to a famous movie - Star Wars. I bought a brick set here and it's so cool.