Colorism and the “Science” of Beauty

Florence Colgate recently won the title of Britain’s Most Beautiful Face.  The competition, which attracted more than 8,000 contestants, was sponsored by Lorraine Cosmetics.  The company compared each face to a mathematical algorithm representing beauty.  Florence, who is blonde and blue-eyes, came out on top:

An example of the formula from the Daily Mail:

A woman’s face is said to be most attractive when the space between her pupils is just under half the width of her face from ear to ear. Florence scores a 44 per cent ratio. Experts also believe the relative distance between eyes and mouth should be just over a third of the measurement from hairline to chin. Florence’s ratio is 32.8 per cent.

So, it’s science, right?  Well, that plus (at least) a little bit of racism.  Carmen Lefèvre, a psychologist, was quoted explaining why Florence was so “classically” beautiful:

Florence has all the classic signs of beauty. She has large eyes, high cheekbones, full lips and a fair complexion. Symmetry appears to be a very important cue to attractiveness.

How did “fair complexion” get mixed up in there?

Not an isolated incident either.  Tom Megginson, of Work That Matters, reported on Britain’s Most Beautiful Face and added in another example of “objective” measures of beauty conflating light with pretty and dark with ugly.  This time it’s an app called Ugly Meter. You take a picture of your face and it tells you if you’re hot or not.  What Megginson noted was the overt colorism.  One attractiveness finding read:

For what it’s worth, he also scanned in some famous faces and found it to be, let’s just say, inexplicable and inconsistent: 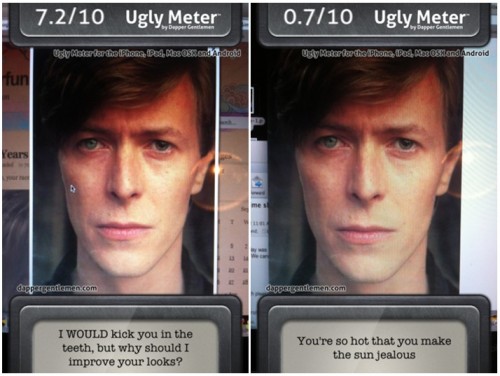 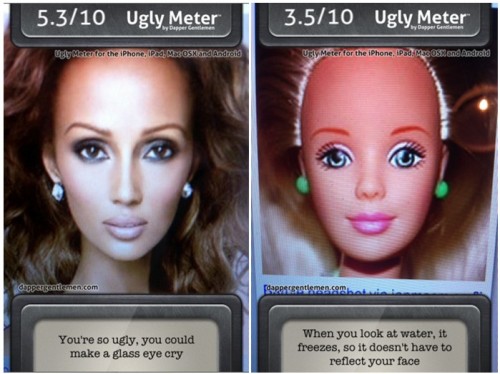 Okay, well it might be right about Barbie. (Ha! I beat you to it, commentors!)

Ugly Meter, by the way, is offering a cash prize for the ugliest face.  So… the world is keepin’ it balanced, I guess.

If I remember rightly the paper selected several finalists, not all of whom were white, and then the public voted on a winner (this girl). 'Fair complexion' is poorly phrased, I agree, but perhaps they mean clear skin rather than whiteness? As for the ugly meter ... yeah that's just bad.

I read an interview with Cornel West about fifteen years ago in which he mentioned that ultimately our current conception of racism has its roots in ancient Hellenistic aesthetics and our long history of ocular metaphors for consciousness.  Seems this app/marketing formula is founded firmly on those same traditions...

My biggest concern about all these attempts to quantify the cultural standard of attraction is the same problem inherent in all representation and standardization in general.  It influences what it proposes to merely report on, creating and reinforcing particular normatives of beauty rather than merely explaining one's place within such a framework, as it scientifically suggests it does...

And the one on the bottom left is a super creepy photoshop, I'm pretty sure.

Perhaps the solution is to have a number of perfect stereotypes, corresponding to different racial categories, otherwise we will be trying to compare apples and oranges.

Unless David Bowie broke the Ugly Meter with his sexyness overload (which is entirely possible), we can only conclude that it has the same scientific authority and rigour as those services that would get your and your couple's name and/ or birth dates and from them get a "compatibility" metric. So, yeah.

Am I missing something here?  What was so radically different about the two David Bowies that would merit such a drastic change in "ugliness" rating?  Is it the slight glare in the left one?

As a Black woman,that fair complexion comment pisses me off!

Looking at the Ugly Meter site and the download page, it looks like the assessment is random and not based on anything.

Does anyone happen to know if the measurements mentioned differ drastically between "races"? Some things -- like facial symmetry -- are nearly universal beauty standards, so aside from the "fair skin" part I don't know that the so-called science bit is racist.

As taken from Dictionary.com's definition of the terms fair and complexion:

1. the natural color, texture, and appearance of the skin, especially of the face: a clear, smooth, rosy complexion."

Concluding that racism has anything to do with the term fair complexion
is a fallacy since, when defined, the term fair complexion can be applied to any individual with healthy skin (regardless of base colour). In this case, the conclusion that a white woman winning the title
of most beautiful face in a country that is itself a cultural hearth (please refer to definition of this term before commenting) of peoples of a traditionally white complexion is evidence of the deep seated
insecurities. Insecurities that are experienced as a result of perceived racism. This racism
whether or not it is actually present, is one way racism is able keep people down. So if you think your better looking forget the ugly meter and get in the contest.