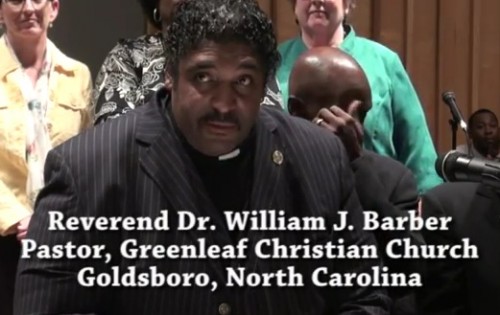 Many of you may have seen a video featuring Reverend William Barber speaking out against North Carolina’s Amendment One, which banned same-sex marriages (and which was approved by voters on Tuesday). The video is heartfelt and passionate, and is also a great example of the importance of how we frame issues in social movements.

Reverend Barber argues that media coverage of the amendment has asked the wrong questions. Whether same-sex couples should be allowed to get married isn’t the core issue here, he says; what’s really at stake is whether the majority should get to vote on which rights will be guaranteed to those in the minority, a decision he sees as a dangerous standard in a nation that has used it previously to exclude racial/ethnic minorities, women, and the poor from the full benefits and protections of citizenship. This reframes the amendment from an issue about same-sex marriages to a broader question about rights, equal protection, and the dangers of codifying inequality into our governing documents:

Couldn't agree with his words more. For years when I've heard people talk about voting for or against marriage rights this has been exactly what I've argued; that basic rights are not something for a ballot box.
Nice video.
Thanks for sharing.

This is a message that EVERY African American, every minority citizen, and every minister should hear.  Thank you Rev. Dr. Barber.

Why is marriage a "right"?  Should love be a right?  Or happiness?  Or housing?  The GOVERNMENT, in its proper role, should manage (for health, population tracking, genetic study, and more) the joining of people into stable, committed unions.  If civil unions DID give couples the EXACT same rights under laws, would it still be discrimination?  If it was used as a tracking tool, a label, to further the study of the phenomena of the joinings of two people who cannot conceive children the natural way, still wrong?  What if we had "Incorporations" for polygamists? And "Bonding Ceremonies" for practitioners of beastiality?  What would it mean if some states began the practice of "Contract Marriages", akin to the renewal of drivers' licenses?
This posting is not meant to be for or against either side.  Just a musing and a desire to question everything.

Marriage is not simply two lovers living together. It is so much more than that. It is a covenant, mirroring God and humanity. Men and women are two parts of a whole. When tied together in love, commitment, and law, a married couple is stronger than any one person could ever be. Sadly, our culture has made marriage little more than a casual agreement. Divorce, same-sex marriage, polygamy, objectiphilia, and other things have marred so much of what beauty was intended to exist in marriage. I think people should definitely love who they want. This does not mean, however, that we can do whatever we want all of the time. I am not homophobic in the least. If the relationship was what God created to be, I would condone it. Health reasons are a huge reason why God created  hetero-monogamy. Given this, I still love and respect you all.