Jacob and Isabella were the most popular baby names last year.  Some observers, even some sociologists, see this as the influence of the Twilight series.  (See here for example.)

But Jacob, Isabella, and even Bella were on the rise well before Stephanie Meyer sent her similarly-named characters out to capture the hearts, minds, and naming preferences of romantic adolescents: 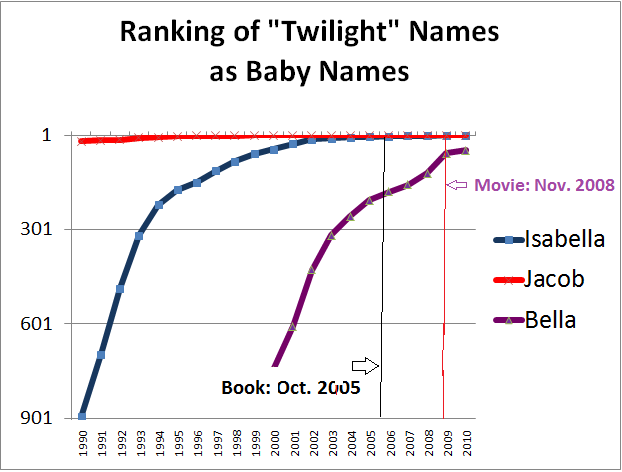 The forecasters predict a bumper crop soon in Rue, Cato, and perhaps other names that are from the Hunger series.  Still, since the YA (Young Adult) audience for these books and movies are more Y than A, I’m hoping for lag time of at least a few years before they start naming babies.  As I blogger earlier, Splash, the film with Darryl Hannah as Madison the mermaid, came out in 1984, but it was not until nine years later that Madison surfaced in the top 100 names. And if there’s a Hogwarts effect, we’re still waiting to see it.  The trend in Harry and Harold is downward on both sides of the Atlantic, and Hermione has yet to break into the top 1000.

Don’t look for any Katnisses to be showing up in your classes for quite a while.

I'm 31 and I have tons of age peers who read YA fiction, though very few of them are having kids. On the other hand my sister-in-law named her daughter Bella a couple years ago, but had literally no idea the name was tied to Twilight.

Harry was originally a diminutive of Henry, btw.

I'm shocked that Hermione hasn't been picked up as a popular girl's name.

What about names that weren't on the rise before Twilight, and are now a lot more common? I know of at least three baby Emmetts right now.

Jacob has been a really popular name for a while now, before the Twilight influence.  The connection to Twilight might be more apparent if Edward has become also more popular, as it was considered an old-fashioned, "stuffy" name in recent decades.  Also, I'm curious if parents refer to their baby Jacob (or Edward) by their full name, as in the movies/books, and do not use diminutives like Jake or Eddie.

Names that fall out of favor because of social events and phenomenons are also really interesting.  The name Monica dramatically fell in popularity after the Lewinsky scandal.  Adolf was a typical German-region name until the rise of Hitler.

Of course the more plausible possibility is that the Twilight characters get their names from recent trends rather than the other way around. You really have to wonder about the logic of the opposite though. Most commonly kids seem to be conciously or unconciously given family names or at the most named after people who've been important to their parents. Baby names are a huge deal, so how many parents would actually name their children after a character in a sereis they used to like?

(speaking of, another interesting story on the theme of names, trends and tradition would be the fuss made about princess Estelle Bernadotte, a name that a famous historian and friend to the royal family ended up calling "fit for a night club queen")

I was born in a 12-bed maternity hospital near Niagara Falls, Canada back in 1950. It so happened that all of the newborns who were my cribmates then were girls - and 11 of the 12 (all except me) were named "Barbara Ann" - a wildly popular baby's name at that time, ever since the famous Canadian figure skater Barbara Ann Scott won a gold medal at the 1948 Olympic Winter Games.

My mum - always a rebel! - decided on "Carolyn Marie" instead!

If I didn't know better I would think that they're naming their
kid after Twilight Sparkle from My Little Pony: Friendship is Magic.  But
no, society prefers the story with a naive, submissive, abused female lead than
the strong, intelligent, studious, self-sufficient female lead (who
just happens to be a magic pony).

break it down by ethnicity and correlate with population shifts, and you might see a more realistic reason for Isabella trending.

Since we're talking about names, it's Stephenie.

Don't forget about other popular characters with the same names, like Izzie from Grey's Anatomy.

I'd assume the opposite of the assumption, really.  Jacob has been a consistently popular name for many, many years, and Isabella has never been unpopular (and to my knowledge, has been quite popular in other countries to a greater extent).  Both names were in the top five long before the book came out.  More likely, Stephenie Meyer just drew from what she war surrounded by.  If every time she picks her kids up from school she hears a hundred stories about "Jacob, NO, NOT JACOB SMITH, Jacob EVANS, did such and such" and "Isabella is having a birthday party" and she thinks those are nice-sounding names, why not just name characters those names?  Plus, the names have implicit meanings behind them.  She's pretty much stated that "Bella Swan" is just there to highlight how amazingly beautiful Bella is.  Stephenie Meyer is also quite openly Mormon.  Jacob is, if anything, even more popular among religious Christians than anything else, as a patriarch of Judeo-Christian religion.

Okay, but you can't argue the same for Renesmee or Cullen or Carlisle...