Urban Demographics posted some graphs from the UN’s State of the World’s Cities 2010/2011 report on global urbanization trends. A snapshot of urbanization in 11 countries: 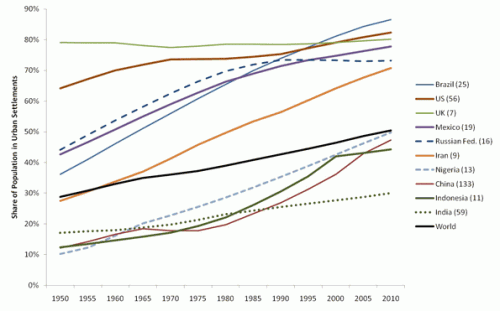 You can see a few other notable trends here that illustrate various national trajectories, as Phil McDermott at Cities Matter points out. For instance, notice that while Russia underwent rapid urbanization between 1950 and 1980, it has leveled off since then. Similarly, Indonesia’s urbanization slowed significantly in the late ’90s and has continued at a much slower pace since then. We also see quite different patterns between the world’s two most populous nations: While China’s urbanization rate sped up in the early ’90s (after urbanization actually dipped in the ’70s), India has experienced fairly slow urbanization.

Credit Suisse released a report on urbanization and emerging markets, if you’re interested in the impacts of urbanization on a wide array of economic development indicators, from electricity and steel consumption to projections of future housing needs to incomes and standards of living.

The Internationalist » Natural Disasters and Humanitarian Assistance to 2020 — May 23, 2012

[...] in population growth, urbanization, water scarcity, and climate change, are increasing the vulnerability of large populations to [...]

[...] in population growth, urbanization, water scarcity, and climate change, are increasing the vulnerability of large populations to [...]

[...] Snapshot of Global Urbanization » Sociological ImagesQuick overviews and basic info on Urbanization. The rapid urbanization of the world’s population over the twentieth century is described in the 2005 Revis… Latest news and videos on Urbanization… [...]