Last fall I posted about the continued use of race/ethnicity as a basis for decisions about hiring when casting roles in Hollywood. Though using race or color as a qualification for a job is illegal in the U.S., it is still widely, and openly, practiced when choosing actors for movies and TV.

Dolores R. sent in an example of a casting call for an Acura commercial that shows how race and skin color requirements are explicitly stated. The role is for an African American car dealer; however, the description calls for someone who is “not too dark”: 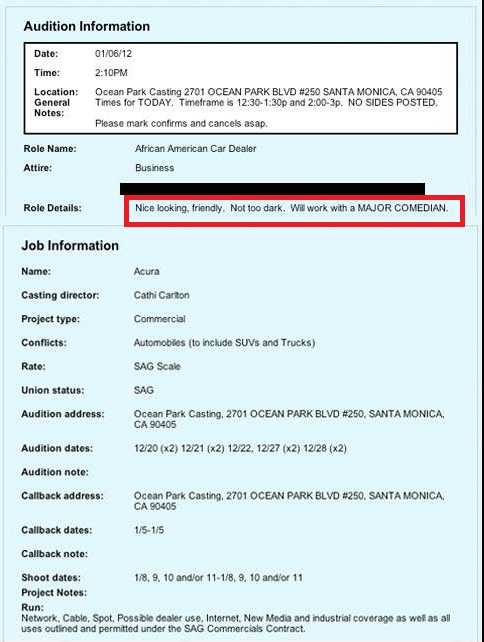 The casting document was posted by Oh No They Didn’t! after an African-American actor who didn’t fit the profile passed it on to them. Someone at the casting agency claimed that the reason they didn’t want an actor who was “too dark” was that it would make lighting and special effects more difficult.

Acura has apologized, though as Forbes points out, they probably had little to do with the actual casting process; the casting call was mostly likely written within the casting agency.

As I pointed out in my earlier post, within the industry roles are generally understood to be for non-Hispanic Whites unless specifically stated otherwise. However, as this casting call shows, even when a role is open to racial/ethnic minorities, additional restrictions related to skin color or other features may still severely limit the pool of actors who have a legitimate chance at winning the role.

I've been wondering about this for some time. I began to notice that when a minority was in a commercial, it was very often a 'certain type or colour' of minority.

I've been wondering about this for some time. I began to notice that when a minority was in a commercial, it was very often a 'certain type or colour' of minority.

There is a
"bona fide employment practice" exception from Title VII employment discrimination claims for acting jobs. I think the systemic practices are problematic, but the institutionalized exception is even more troubling (though policy arguments can be made in favor of the exception).

I just don't understand what the actor's skin colour had to do with this role.  I don't see any connection at all, sorry.

Although this is still completely terrible, and in general the casting system needs an overhaul (like many aspects of the hollywood system). You can't call bull on the lighting claim. It is actually a lot harder to light a scene when two actor's skin colors are dramatically different. You basically have to chose which one you want to show up clearly and hope there is a way you can deal in post. Because cameras do not equal eyes. Still, they should have been willing to deal with the complication or at the very least apologize to audition-ers and explain the situation.

It should be obvious why nobody interferes with the race and ethnicity based hiring in film and television, because the law could not be applied fairly. Obviously for an Acura commercial the race of the car salesman doesn't matter, but some artistic visions require consideration of race. At an extreme, Charles Burnett could not have done color-blind casting in his incredible film Killer of Sheep. Also, some directors wouldn't want actors of certain races because they would be forced to touch on issues they aren't interested in. Terrence Malick's film from last year "The Tree of Life" rings to mind. He couldn't cast a black family in the 1950s south without touching on racial issues and such issues would be a distraction from the intention of the film, hence it was more appropriate for the artistic vision to cast a white family. But here is the problem, how would you enforce the law impartially. Are we going to have an state attorney arbitrary rummage through people's artistic vision and decide whose justification is sufficient enough? For a law to be effective it must be clear and lack arbitrariness. Anti-discrimination laws in casting would be applied completely arbitrarily and shut down some of the greatest artists working today.

Advertising casting is awful. I've been through it.

When we cast for "diversity" we end up having to define each character's appearance. As a Creative Director, I always try to keep from having the result look contrived or stereotyped. But we do cast people by "type" when trying to put together families for ads that look like blood relations (since blended families and adoption, while perfectly ordinary, take too much storytelling to provide a clear "read" in a 30-second ad, and distract from the message).

That said, I have NEVER made a casting note like that. I can't believe anyone would be that idiotic and racist.
Don't blame the brand, though, or even the ad agency. Often casting agencies are sub-contractors of the production companies, who are sub-contractors of agencies, who are contracted by the client. Sometimes the oversight can get a little fuzzy.It reminds me of the Dove casting fiascohttp://workthatmatters.blogspot.ca/2010/06/unreal-beauty.html

[...] Casting Call Requests African American Actor Who Isn't “Too Dark … The casting document was posted by Oh No They Didn't! after an African-American actor who didn't fit the profile passed it on to them. Someone at the casting agency claimed that the reason they didn't want an actor who was … [...]

Also I can't help but think that that's a pretty degrading role for Michael J Anderson.