I’ve previously posted an amazing clip that illustrates this fantastically, from a show called Battle of the Bods.  The “Don’t Hate Me ‘Cause I’m Beautiful” trope is also part of this phenomenon.  Bryony W. sent in another example: a cover of Woman’s Day featuring a “bikini war.”  The cover implies complicity, including the supposed quotation, “My beach body’s better than hers!” 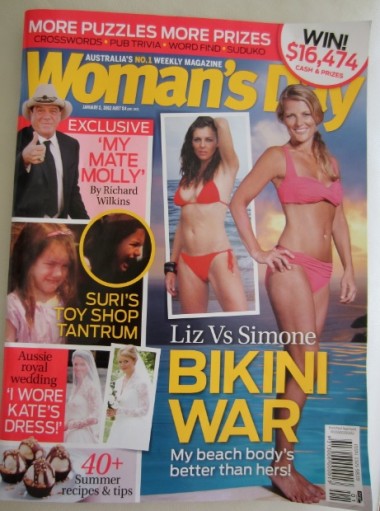 The cover reveals that agents of the media — in this case, whoever decides what stories to include at Women’s Day — actively try to pit women against one another.  This idea comes through loud and clear in this compilation of clips, sent to me by Veronica G.  Titled “Divas on Divas,” it features female pop stars being asked to comment about each other and being pushed to say mean things:

Here are some more examples.

“Bathing Suits, Ballgowns, and Bickering,” a story in Marie Claire: 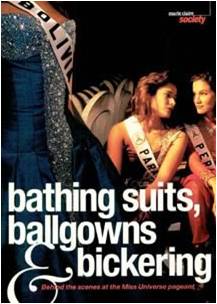 “Physicians Recommend It, Women Fight Over It”: 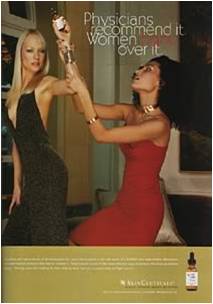 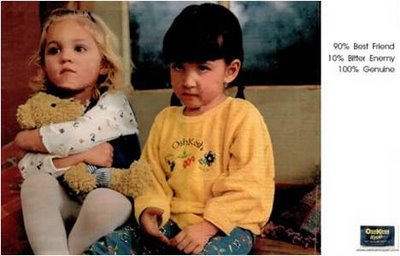 [...] cultural endorsements of the idea that women and girls are always in competition with one another here, here, and here. tags: alcohol, beauty, disability, fat, gender, prejudice/discrimination| [...]

HOW OBJECTIFICATION OF WOMEN MAKES WOMEN HATE EACH OTHER » Sociological Images — November 27, 2009

[...] this post for a breast implant ad suggesting that bigger boobs make you look smarter. And see this post for ads capitalizing on the stereotype that women are naturally bitchy to each [...]

Did you happen to read this article in The Guardian yesterday, or is it just a big coincidence? http://www.guardian.co.uk/commentisfree/cifamerica/2012/apr/17/women-on-women-fights-ann-romney

I definitely see this, and more disturbing is, I think adult women who've been influenced by this attitude tend to pass it on to their daughters, at a very young age.  I don't notice it much among girls as young as those in the last ad at all (I think the ad applies more adult/teen mentalities to very small children) but around middle school it seems to hit full force.  The attitude seems to be "anything you want belongs to you, and it is not enough that you should succeed.  Others should fail."  Of course, very little of this is applied to things such as competing for jobs, but more competing for men or a particular image, either physical or material.  It's not enough that a woman is thin, she must be thinner than all of her friends and especially her enemies.  It's not enough that she has a handsome boyfriend, he must be the most handsome of all the boyfriends.  It doesn't matter if she wears a 32D if someone else is wearing a 32DD.  So what if she just got a new Coach purse and a 200 dollar dress?  Someone else has a Prada purse and a 400 dollar dress.  It's definitely a cultural thing,and it's pushed by some families.  It goes above and beyond just conforming to a culture of beauty and materialism, it makes it so anyone who is perceived to be more beautiful or has more materials is inherently a malicious enemy who needs to be taken down or one-upped.

The Liz vs. Simone (whoever the hell they are) bit really speaks to me, as I live in a warm climate where it's already been bikini season for several weeks.  Sitting out by the pool, the most common line spoken seems to be "oh, you're so skinny, I'm so fat, I hate you," followed only by "I look so much better in a swimsuit than you/her."  Usually from people who look more or less exactly the same as the person they envy or insult (similar to Liz and Simone, who look EXACTLY the same).  The only thing I can say to add a gleam of hope is that it seems to be an obsession among a certain group of women and girls, more than some universal phenomenon.  I hear many more individual women and girls at the pool saying "oh, you look so cute!" "Thanks!  So do you!" it's just that "I hate you" or "you're fat" seems to be repeated ad nauseum by the same people.

Fixed link, to the talk, I think.

Just another way the patriarchy keeps women divided from each other. By keeping women afraid, pregnant, married, etc. we're less likely to rise up as one and fight back- and stop giving away our amazing female energy to men, with nothing in return. "Catty" my ass. More like "living in fear of male violence"...

"I did a Google Image search and generalized my interpretations of the results to US culture in general."

*Twitch* Really? Is that a real research methodology?

[...] Portraying and Pushing Female Competitiveness. Lisa Wade. There is this thing that is played out in movies, and on magazine covers, and on tv… and everywhere else. Its the way women interact with each other, and we are often portrayed as being in competition with each other, constantly vying for the attention of men. On Tabloid Magazine covers, women are actively pushed into this competition, and it assumes that women need men to somehow validate that they are better than all the others. [...]

To be fair, “Bathing Suits, Ballgowns, and Bickering" sounds like it's about a beauty pageant and the associated picture affirms that. So in that case, the women involved would actually be in direct, legitimate competition with one another. Don't seem to fit the trope here.

[...] Dr. Lisa Wade wrote for Sociological Images that women are often pit against one another in media images and are unable to be friends in real [...]

[...] – appearance, life, and attractiveness to men. Yes, I said it. Society tells us that our worth is determined by the way men see us – which is done to encourage women to look a certain way and be suspicious [...]

Really? How does modern Western society value men more than women? Presumably we've come a long way since a century ago when - oh yea - during the sinking of the Titanic, 4 out of 5 men went down with the ship to save the women and children. Oops.

If you want to go on telling yourself you're a victim so you can stay angry and feel go on ahead, but we men are getting rather tired of it. There's only so many time I can handle reading about this mythical patriarchy.... Do you also believe in the tooth fairy and that 9-11 was an inside job?

[...] and attacks on attachment parents by the people feeling judged, is completely the result of patriarchal enforcement of female competitiveness. Because the patriarchy says there is a “correct” way to be a woman/mother, then women get [...]

[...] of womanhood/motherhood.  Women are expected to duke it out for this coveted honor, and this idea is reinforced and encouraged though socio-cultural messages, especially via “agents of the media … actively try to pit women against one [...]

[…] against women. We are taught from a young age that other women are our biggest adversaries. Society tries to pit girls against each other, which isn’t just damaging, it’s downright cruel. With men being viewed as the dominant […]

[…] are often pitted against each other in the media and in everyday culture, but why? (via The Society […]