Faulty Cognitive Wiring and the News

By now, you have heard about the killing of Trayvon Martin.  But when did you first hear about it?  If you’re a news junkie and were watching the national news channels,  the answer to that question might well depend on which one you watch.  ThinkProgress counted the number of stories about this killing on three cable news outlets in the week following the event. 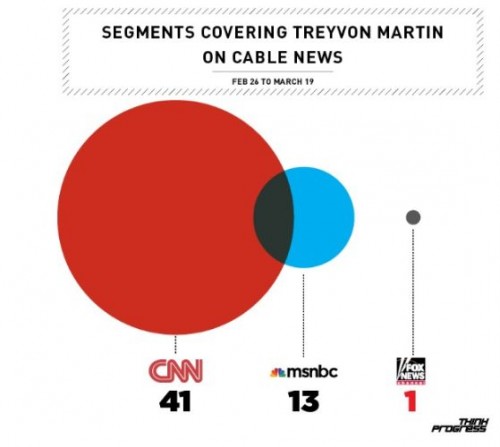 McCardle looks at the graph and sees a reason for different perceptions of racism as a problem:

…the disparity here may have something to do with whether one thinks institutional racism remains a serious problem in the United States. Conservatives often seem to think it isn’t, and that if anything, the real problem is how often spurious charges of white racism are deployed by their political opponents, while liberals more often tend toward the opposite view. Maybe both groups are drawing justified inferences from the data they’re seeing.

Do Fox viewers discount racism because of what they see?  Or is the network disparity more an example of another cognitive wiring problem – Confirmation Bias?  Confirmation bias is our tendency to seek out and to remember information that fits with our existing ideas.  Faced with information that clashes with that world view, we ignore, forget, distort, or misinterpret.

In Foxland — the world of both those who create Fox news and those who consume it — racism is not a real problem.  A story of a white Hispanic man armed with a 9mm chasing down and shooting a black teenager armed only with Skittles has no place in that world.  The Fox news producers don’t want to tell that story, and the viewers don’t want to hear it.  In the days since this graph appeared, the story has become too big for even Fox to ignore. I would imagine that Fox will instead interpret the events so as to fit with the view that McCardle suggests — that whites are the victims.  If you watch Fox, get ready to hear a lot about self-defense.

I don't watch TV news and can't comment on their coverage of the case. However, I can't help but comment on the author's obvious over-simplification of this event. Jay writes, "A story of a white Hispanic man armed with a 9mm chasing down and shooting a black teenager armed only with Skittles." When looking at reports of what eye-witnesses told police, along with the injuries sustained by the shooter, a more complex picture appears.

Let's not decide what happened based on our framed picture of societal racism, but rather based on evidence.

This is like comparing apples and oranges.  Fox News doesn't run "desk reporting" for a majority of their day like CNN.  It's mostly shows with distinct formats.  CNN would run the story more as they recap news hourly for a big portion of their day.

I wonder if there's much cross over between Fox News viewers and SocImages readers?

This article is great.

That article isn't actually by Megan McArdle, she is on leave. It was actually done by Julian Sanchez.

Also, your closing statement, "A story of a white Hispanic man armed with a 9mm chasing down and shooting a black teenager armed only with Skittles" does not appear to jibe with what witnesses have described.

For your convenience there are two different echo chambers you can choose.  Team lefty and team righty.

Anyone else think it is amusing how Zimmermann gets be to an honorary white since the shooting.

I don't know if race was part of the dialogue when Martin's murder was first brought to the American public's attention.  By the time it reached major European news outlets, it had already taken on the racial dimension that is now at the forefront of the incident.

I can say with confidence however that if there was an incident of an unarmed person being shot by a person of the law, the incident would receive a huge amount of attention in these outlets, and the public outcry would be immense.  (See the 2008 Alexis Gigoropoulos shooting in Greece for a similar example of an unarmed teenager being shot dead by an authority figure, in this case a policeman.)

Now, the issue of race in the Martin case is extremely important, and I don't mean to take away from its importance.  But an incident of an unarmed person being shot dead - from an authority figure no less!! - is a social tragedy in and of itself. The fact that there are laws that mute and/or defend Zimmerman's actions points to the travesty of a gun culture that permits him to be considered partially or wholly innocent.

I, on the other hand, find it quite fascinating that CNN has such a bloated coverage of the Martin case, if you simply focus on the three networks in the graph above.  It would seem that Mr. Livingston is implying with his attack on Fox News that CNN has given the case the proper amount of coverage.  Can't the argument be made that CNN, like other groups within our country, is trying to read far more into this Martin case than should be read or that they are trying to exploit the story to further their own political/social agendas?  I'm not defending Fox's relative lack of coverage, per se, but let's not forget that there is such a thing as too much coverage of an event.  Why this child?  Why this shooting and not the myriad of tragedies that occur across various cultures, races, and countries on a daily basis?  Again, I believe each network and form of media has its own agenda regardless of its denial in having one and its often weak insistence that it is merely being "objective."

I don't like doing stats like this by pure numbers. I assume some disparity is there, but it's possible that Fox and MSNBC have far less stories in general than CNN. Something like this really would make more sense as percentages-- percentage of shows mentioning Martin's killing, or segments on it, or something like that.