Presidents Who Kill People are Popular

David Henderson and Zachary Gouchenour have a paper on the topic of presidential ratings. The finding is simple. American war casualties, as a fraction of the population, positively correlate with how historians rate U.S. presidents. More death = better presidents. The regression model includes some controls, like economic growth. Here’s the chart: 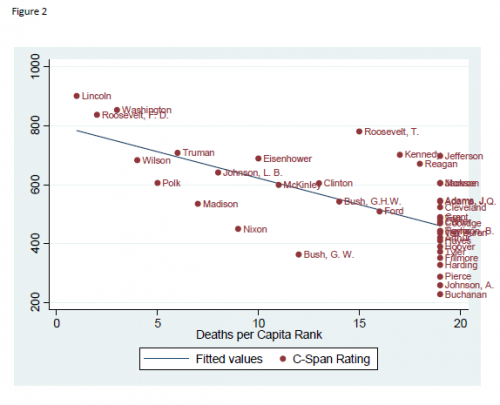 This is consistent with sociological research on state building, which has traditionally linked wars, bureaucratic growth, and tax collection. See, for example, Charles Tilly’s classic work “Warmaking and Statemaking as Organized Crime.”  My one criticism of the paper is that there is no measure in the regression that controls for “big legislation” (i.e., New Deal). Historians like law passing and it might account for some variation. I have a hunch that is how variation on the right hand side of the figure would be explained.

Henderson and Gouchenour then spin out the policy implication. Greatness rankings by historians may prompt presidents to start more wars. The historians may have more blood on their hands than we care to admit.

Fabio Rojas is an Associate Professor of Sociology at Indiana University. He is the author of two books: From Black Power to Black Studies: How a Radical Social Movement Became an Academic Discipline and Grad Skool Rulz: Everything You Need to Know about Academia from Admissions to Tenure.  Rojas’ academic research addresses political sociology, organizational analysis, and computer simulations.

America does have a huge passion for patriotism, and patriotism comes out best when we're at war.  Just look at our media from movies to books -- war is featured heavily in historical ones as well as fictional (futuristic even) ones.

Kind of a correlation/causation question, isn't it? I would think a historian looks at the greatness of a president and ranks them based on their performance, which is more easily distinguished during times of war. There's more opportunity for a president to shine as a leader, face down difficulties, make hard decisions that affect the union, etc. And the greater the war, the greater that impact on their legacy. Great war correlates to great deaths, but I think the presidential management of the war is distinct from that.

It's interesting how the
title of the article transforms "Americans" into generic "people"
(discounting the millions of foreign dead caused by American action) and
"ranking by C-SPAN and thus presumably a small number of elitist historians" into "popular[ity]". :)

Does anyone know the process by which the ratings were obtained? The graph is marked "C-Span ratings," so I assume the source is C-Span, but what was the methodology? Also, the graph isn't exactly clear on what it's x- and y-axes are referring to...

Interesting article.  The idea of Lincoln, FDR and Wilson as warmongers could be a new one to many people.

Made me think of this Sideshow Bob quote I saw earlier on listverse:

"Your guilty consciences may make you vote Democratic, but secretly you
all yearn for a Republican president to lower taxes, brutalize
criminals, and rule you like a king!"

Why does Washington have a high per-capita death ranking? There was no major war during his time in office.

[...] Fabio Rojas: “The finding is simple. American war casualties, as a fraction of the population, positively correlate with how historians rate U.S. presidents. More death = better presidents.” Taegan Goddard’s Political Wire Tweet This Post Posted in Breaking News Tags: Great, President « Giancarlo Stanton Practicing Line Drives So He Doesn’t Activate That Stupid Marlin Statue Thing You can leave a response, or trackback from your own site. [...]

PRESIDENTS WHO KILL PEOPLE ARE POPULAR | knowledge of self — December 28, 2013