A great story at the New York Times, sent in by Katrin, reveals how the evolving science of marketing is creating its own set of challengers for advertisers.  Target, like many companies, tracks its customers purchases and uses the data to send packets of coupons tailored to individuals and households.  In this way, they tempt us into the store by offering us deals on things they know we want.

Target is also in the business of predicting what a person will want.  So the marketing company decided to try to use costumer shopping habits in order to predict pregnancy.  If they could start sending the woman baby-related before she started shopping for them in earnest, the company figured, she might end up always thinking of Target when she needed to spend money on the baby.

Using an algorithm that considered the purchasing patterns typical of newly pregnant women — e.g., prenatal vitamins, scent-free instead of scented lotion, a sudden uptick in the acquisition of cotton balls — they were able to make a pretty good guess as to whether a female customer was expecting.  Suddenly these women were getting coupons like this: 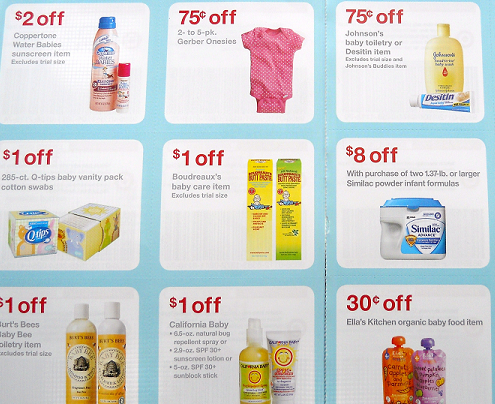 First was the father of the teenage girl who started getting coupons for diapers in the mail.  This led to an angry phone call to Target and, later, a chagrined apology by the stunned grandpa-to-be (story here).

The second was the reaction of the intended target, the expectant moms.  Some were pretty freaked out that Target knew they were pregnant!  It’s one thing, it turns out, for Target to know you like vanilla better than chocolate ice cream, or you fancy scented candles; it’s different, perhaps, to suddenly realize that it knows you’re having a baby.  That could feel like a serious invasion of privacy.

So Target learned that the ability to predict our needs and desires comes with the need to do some psychological management as well. Accordingly, they began sneaking baby-related coupons into coupon books that also included other things.  So far, Target reports, these women are none the wiser… and thinking of Target as their one-stop baby shop.

So if I am buying stuff for a friend's baby shower, all of a sudden I'm going to get baby coupons in the mail from Target?  That's screwy.

I realised this goes on in many supermarkets the last time I went to an European equivalent of Target where I have a discount card. I don't buy there regularly and my shopping cart basically has gourmet food and treats, special offers and fresh, healthy stuff.

So the last time I went there, the cashier gave me a coupon that can only be used with my loyalty card with a discount for gin. Gin? But I have never bought alcohol here. Then I realised that gin tonic is in fashion and that they know enough about me to guess that I'm the kind of fashion-conscious person who has just discovered them.

Dumb question, but what are the cotton balls for?

it’s different, perhaps, to suddenly realize that it knows your having a baby.

I went to the provided link to read about Target and the expectant Granddad and chuckled when the sidebar featured advertisements for raincoats--I've been searching on and off for a raincoat.

Who objects to Target looking at your past purchases and guessing what your future purchases will be?

Now, who objects to Target letting you know that they have a good idea what your future purchases will be? (Guessing correctly)

This is a little random and a little bit off topic but this reminds me of something. I one time took a phone survey where I was asked about four or five questions. One of them being if I smoked cigarettes. I said no, they asked what cigarettes my friends smoked. They also asked if I drank orange juice. Several weeks later I received a crystal studded lighter from Camel. Ever since then once a month I get coupons for Camel cigarettes in the mail. I think I have been getting them for probably three-four years now. I never did get any coupons for orange juice.... slightly disappointing. Like I said, random and off topic a bit but it still shows how companies market. Also, Camel must really really want me to smoke. (hmmm I wonder IF I ever started if I could sue Camel for making me start? I am kidding)

That glaring "your" bugs me more than it should.

Has nobody commented about how terrible it is to advertise baby formula (with money off) to pregnant women?

The Golden Rule: Tweet Others the Way You Want to be Tweeted | Online PR & Advertising — October 21, 2013

[…] As far as the psychology of public relations and social media goes, knowing and appealing to your audience is the only way you’re going to have a well-run campaign. You could have the most creative and brilliant campaign idea for your brand, but if you market it to the wrong audience, it’s going nowhere. It’s important to start off by addressing a couple of important psychology-based questions when planning a PR campaign: Who are the audience members and what are their key behaviors? What drives these behaviors? What behavior do we want to change or encourage? (CIPR, 52).  Psychology is used in PR to do extensive research and learn about your audience as thoroughly as possible. One interesting example of this involves the popular brand Target. They used information on the buying habits of their customers and were able to predict (with shocking accuracy) whether a woman was pregnant or not. Based on the accumulated data it would send the woman pregnancy/baby related coupons, and advertisements. So what’s a potential unexpected consequence of this? Well in this situation Target found out a teenage girl was pregnant before her own father did. Is it creepy and intrusive, or is it incredibly precise researching and marketing? I’ll leave that for you to decide. Either way, the psychology inolved public relations, advertising and marketing cannot be understated. http://thesocietypages.org/socimages/2012/04/03/target-knows-youre-pregnant-psychological-management… […]